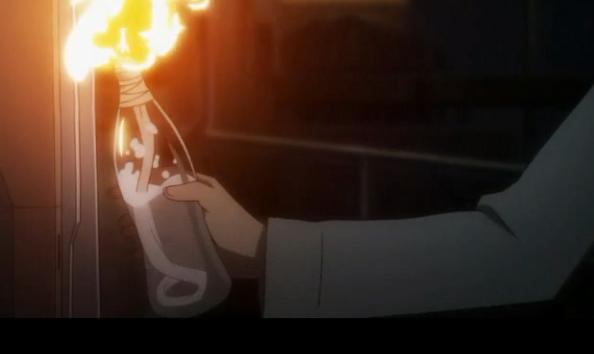 Same with Angel Beats, I won’t actually tell you guys what happened before. Maybe I should just start from next season’s first episodes…

As in the previous episodes where the Dollars and Slashers were explored, this one deals with the scarves. Basically, Kida reveals that IZAYA IS TOO AWESOME to not have a finger in every pie, and ever from the beginning everything was going

It centers around Kida’s past when he was the leader of the Yellow Scarves (which was pretty obvious ever since episode 1), who have been… gang-like. They’re fighting with the Blue Squares and were losing, but because of Izaya managed to get somewhat close to winning. 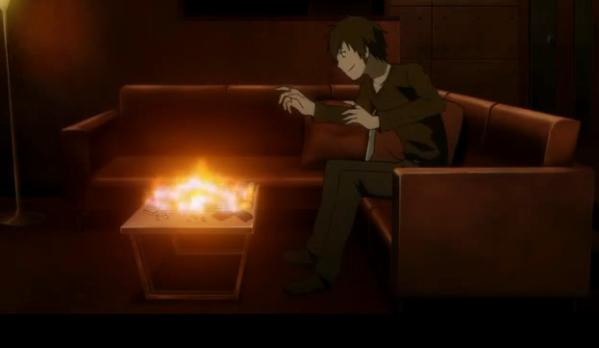 Then the leader of the Blue Squares kidnaps Kida’s girlfriend, setting Kadota’s gang to LIGHT EVERYTHING ON FIRE. This meant that Kida’s girlfriend escaped (and is in the hospital ever since), while Kida did nothing and became emo.

…Honestly the impact of this has just dimmed down, a lot. Izaya was expecting something, like, the apocalypse to reawaken Selty’s head. But honestly, how could a battle between these three factions be that big anyways?

Sure, there are a lot of Dollars. But who are they? They won’t fight, for god’s sakes if you’re in Ikebukuro your granny’s probably in the Dollars. Nothing can come out of this side.

The Slashers were a bit iffy too, I mean, Shizuo basically wiped them all out. One person. Honestly, if you just take a small (40ish?) police force you could probably quarantine all of the Slashers in some facility, this isn’t a big force at all.

Finally, even Kida admits that the Scarves are just middle-schoolers. What harm can middle-schoolers possibly do? Maybe if Izaya got the Yakuza in a fight something big would erupt, but honestly? A bunch of old people, zombies (who, as you know from all games, are extremely easy to kill), and a bunch of middle-schoolers? All-out war?

Anyways, this was a pretty late post, but I guess I’ll just watch the next episode now…

This entry was posted on 2010/05/21 by Mushyrulez. It was filed under Animanga and was tagged with Animanga, Anime, Anime Post, Durarara!!, Images, Mushz.