Note: Anime Evolution is coming to Vancouver in August. Unfortunately, I can’t go even though it’s so close, unless I find a way to persuade my parents that attending an anime-convention is a good use of my time. Also, it costs money, so… :/

"Then they'll know about you stealing from other people's garbage trucks!"

So we open up with these two girls chasing this gangster-stalker person. They’re from the “Otogi Bank”, and want the stalker guy to stop stalkering. The stalker guy won’t adhere to common sense and just run past the girls, but rather takes a knife and tries to stab them.

Yes, we know that knife is yours.

Just as he lunges to DELIVER THE FINAL BLOW a rock comes flying out of nowhere and knocks the knife out of his hands. Seizing the chance, the girl PWNS the gansta into the ground.

Myon's coming out of my face :/ 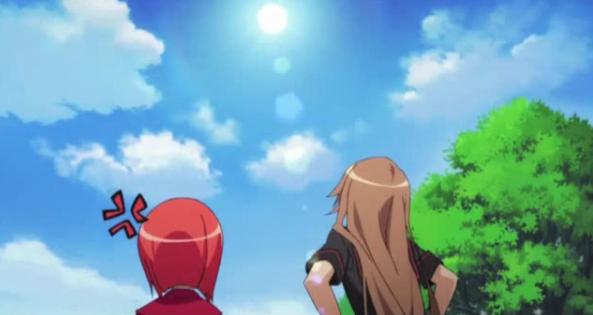 …er, I mean, the narrator reveals some backstory. The setting is a town called “Otogibana” (which in Japanese, is “fairy tale”). The girl who punched Myon out of Gensokyo is Ookami RYOUKO, Ookami from Japanese “wolf”. Then, we have Akai RINGO (Red (not Bad) Apples), who happens to wear exactly the same clothing Little Red Riding Hood did.

Now, do we notice anything?

Yes, this entire anime is based on fairy tales. Except it’s in “real life”, which isn’t really real

Considering that punching someone will leave thus a mark 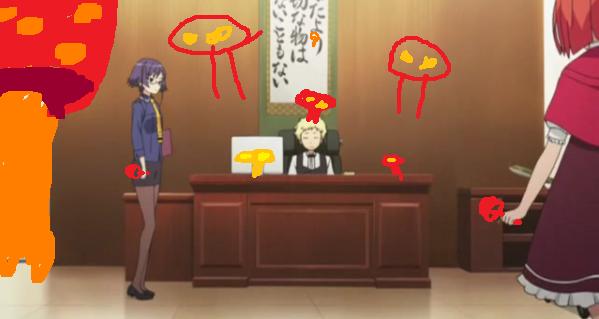 Mushrooms like to grow in the weirdest of places.

The boy with the mushroom on his head is Franz… er, Kiriki LISZT, who sucks at composing so much that he doesn’t even mention how much he sucks at composing the entire duration of the anime. The purple-haired person is his cousin, Kiriki ALICE (Ari to Kirigirisu, the Ant and the Grasshopper).

It's obvious, they're rehearsing for the opera

The opera singer is URASHIMA, and the… other person is OTOHIME. They appear once and never.

Anyways, the Otogi Bank has a lack of non-opera singing males, so they set out to recruit more.

On her way home, Kyouko is confessed to by a hypnotized zombie.

Ringo shows everyone how she has complete internet access to all of the school’s records and reveals that Morino RYOUSHI (Japanese for hunter; wolf, hunter, and little red riding hood?) is merely houraig- er, a lurker.

His grandfather is some sort of 1337 hunter, who has amassed so many kills on CounterStrike that RYOUSHI inherited the natural lurking skill, which is now in his blood. Because of this, whenever someone looks at him he freaks out in case he gets sniped.

Anyways the Otogi Bank decide to test his stalking-skills, and a client, Haibara KAKARI appears.

Apparently, the Otogi Bank operates on a loan basis; they help you, and you are forced to help them later. Not sure if interest or fixed-rate income tax mortgages apply but oh well, it’s just a small favor, right?

I know that weird fetishes are normal in anime, but... what is this I don't even

That maid (who just has to appear in EVERY SINGLE FREAKING ANIME OUT THERE) is Tsurugaya OTSUU (from “Tsuru no On-gaeshi”, the Crane’s Repayment).

KAKARI reveals that her Prince of Tennis [insert extremely stupid and obvious pun/link here], Ooji-sempai, has been KIDNAPPED BY AN EVIL OVERLORD CAPABLE OF HIGH LEVEL NINJA-JUTSU SO THE ENTIRE VILLAGE OF THE LEAF MUST TEAM UP TOGETHER TO DEFEAT OROCHIM-wait, wrong anime. Rather, he suffered an injury and is going to quit tennis. :/

But thankfully, they can stall that, as quitting a club requires “filling out a designated mushroom with necessary spore prints…”

Back in my day, all we had to do was curse at the leader, spit at the ground, and walk out the door...

Obviously they tell RYOUSHI to stalk Ooji, steal the form, and run away.

Anyways, they monitor Ooji’s activities because as first-year high school students, they somehow have the capabilities to hack the school cameras around the school, as well as a flying one capable of directly monitoring a moving body.

I'm pretty sure you could just ask him...

So, because they aren’t smart enough just to get on the freaking bus to school, they somehow have to create a bicycle, with a giant pumpkin attached behind it. 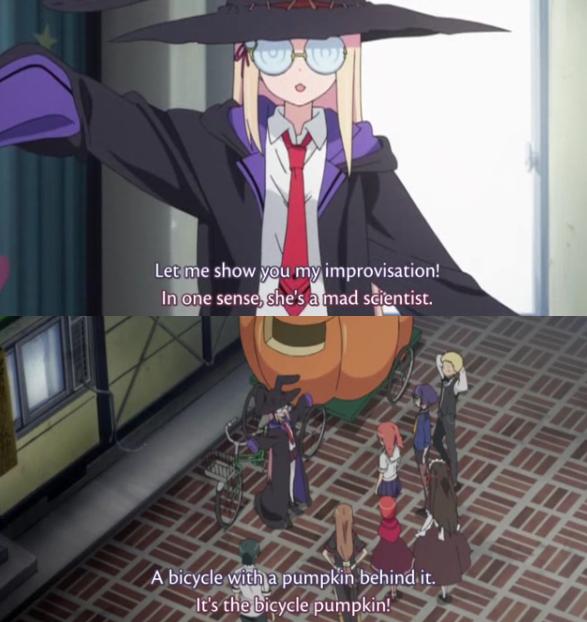 It's a BICYCLE. With a freaking PUMPKIN behind it. How does that require a "mad scientist?" YOU TAKE A BICYCLE AND PUT A PUMPKIN BEHIND IT. THERE YOU GO. PROBLEM SOLVED. EVEN BETTER, YOU TAKE THE FREAKING BUS. :@

﻿The lololol-I-have-a-nice-hat-scientist-person is MAJOLIKA Le Fay (Morgan Le Fay, from The Fairy Tale Legend of King Arthur). It takes them all of… 33 seconds to get to the school, in which case RUNNING there would have been faster than RIDING A FREAKING BICYCLE WITH A PUMPKIN BEHIND IT.

OK, so now he's a frog. What fairy-tale is this?

Fortunately with that mask, he can’t be seen so can’t become scared by being seen. Unfortunately, he can’t see anything. He crashes into a well-placed… table?! It sends Kakari flying who kicks Ooji straight in the faic. 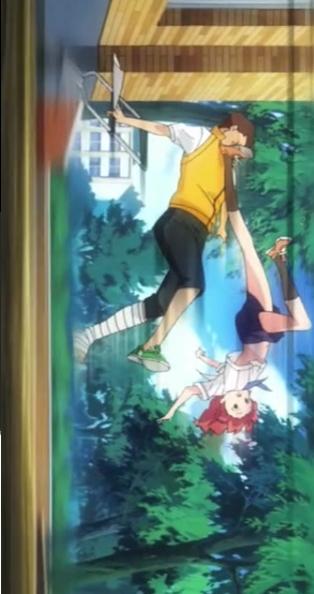 Kids, this is why you never leap off the school roof into an upside-down flying girl's shoe. While clutching a paper airplane in one hand. With horizontal trees in the background.

But lo and behold, the resignation form is taken and so now Ooji can’t quit the tennis club. Nevertheless, she leaves her shoe behind as she leaves…

"Dude, why did you hit him with the pole, I was going to punch him!"

Ryouko encounters the dude from the beginning and Ryoushi takes a hit for her, somehow surviving even though they hit him square on the back.

Because he is an excellent shield, they deem Ryoushi “trustworthy” and he is now part of the Otogi Bank.

Well, what can I say.

Firstly, this anime seems to have… a variety of opinions on it, from good to horrible.

Quotes Zyl, “I have been really looking forward to this series and I am not disappoint.” Yet at the same time, linkinstreet says, “It reeks of every moeshit anime that you have watched for the past 5 years.”

Not only is the general anime disputed, but also the effectiveness of the narrator, Kuroku (from Toaru Majutsu no Railgun, which I haven’t watched so I have no idea why we chose this name. I think it’s because they’re voiced by the same person, but… eh). As Hanners and Kurogane say, “The only thing that saves the episode from sinking entirely into the mire of mediocrity is the show’s narrator.” and “…with  Narrator-san being so bloody awesome…” On the other hand, theaustincritic claims “The sarcastic narrator that is utilized frequently throughout the episode was more annoying than funny.”

We’ve only heard Kuroku for one episode, and the voice is already starting to wish she gets strangled to death in a well off the coast of Finland. Yet, the anime seems more interesting with her.

But what does this mean? It doesn’t mean Kuroku is effective.
It means that the anime isn’t.

Good books, good anime, good plays don’t require a  narrator. There are exceptions in which the narrator is a crucial part, but in Ookami-san, we don’t need the narrator. Nevertheless, the show would be much worse without the narrator – showing that the show’s quality needs a narrator to boost it up, if you know what I mean.

The jokes she made haven’t gotten too annoying to me yet, but if she keeps on breaking the fourth wall so often, I’m sure it’ll get boring soon. All in all, I’d wish she didn’t exist in the show, but I’d probably stop watching if she wasn’t.

The show tries too hard. It tries too hard to be funny, during times in which it wasn’t really that funny. Only the ending was laughable, the other times were either small chuckles or “facepalm-WHY-IS-THERE-A-GIANT-PUMPKIN-BICYCLE-HERE?!”. I don’t find the show to be quite believable, but anime shouldn’t really be believable, should it (with this type of a plotline).

As for plot analysis, it’s obvious the rock thrown was by Ryoushi; that’s why he chuckled that time when he said “Yeah, looolololo I couldn’t protect her (even though I threw a rock that disabled the gangster). Foreshadowing? That’s not very common in an anime (AHEM ANGEL BEATS AHEM AHEM AHEM).

The ending (opening?) also showed Ryoushi with an EPIC SLINGSHOT-ARM THING. In conclusion, the only reason I shall continue to blog this show this season are:

Also, at the very end, Ooji tells every girl in the school to kick him with that shoe, and so… yeah. Don’t ask. 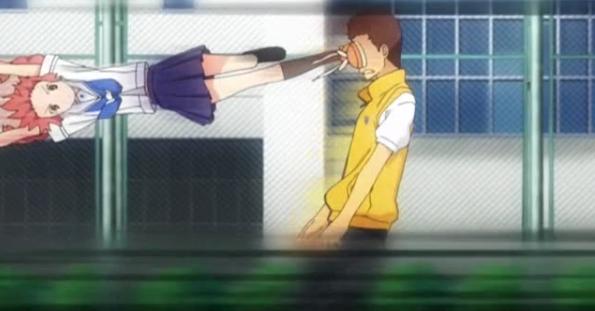 This entry was posted on 2010/07/03 by Mushyrulez. It was filed under Animanga and was tagged with Animanga, Anime, Anime Post, Images, Links, Mushz, Ookami-san to Shichinin no Nakamatachi.