So, uh, first an announcement: YuChoy was supposed to blog HotD, so he’s taking over that series now. Which leaves me with the other badass series this summer; BLACK LAGOON.
Unfortunately, BLACK LAGOON is actually BLACK LAGOON 2: ROBERTA’S BLOOOOOOOOOOOOD TRAIL, so I’m finishing BLACK LAGOON and BLACK LAGOON: THE SECOND BARRAGE.
Actually, I’ve finished BLACK LAGOON through daily 3-hour marathons. So here it is; an anime half season review. 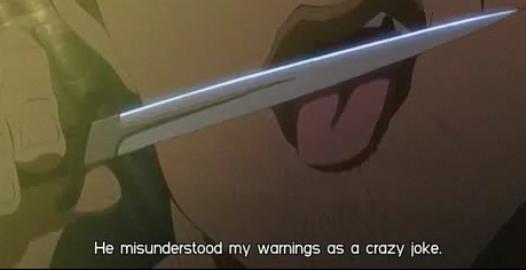 Episode 6 starts off with Rock and Revy RUNNING ERRANDS.
They first go talk to this STRONGLY-PIMP-LOOKING-LIKE AFRO-DUDE about BEER.

Actually, he means Suicide and Mundicide. Ya know, restaurant at the end of the universe?

They then visit a CHURCH.

Where they buy ROCKET LAUNCHERS.
:/

I don't think it's the right time to say that...

The church apparently deals in drugs and arms trades, and because they’re religious they can MOVE AROUND without people SHOOTING THEM TO DEATH. Anyways, Rock manages to talk about TEA for so long that the CHURCH NUNS give them A ROCKET LAUNCHER and a bunch of other stuff.

Rock and Revy then have a big, useless argument about ideologies, until the police come and arrest them.

"Then, I suppose it's time to... GOLF RIGHT HERE *SWINGS GIANT GOLF CLUB*"

Rock then engages in CHILD ABDUCTION, abducting GARCIA Lovelace who is the only son of one of South America’s MOST POWERFUL families. The COLOMBIA CARTEL tried to RANSOM GARCIA but his father, DIEGO wouldn’t let that happen. So, the CARTEL is forced to give GARCIA to the BLACK LAGOON.

GARCIA hopes that his maid, ROBERTA, will save him ’cause she’s cool. But obviously that’s impossible ’cause maids don’t throw knives and stop time.

Nevertheless as the Lagoon heads into the YELLOW FLAG to drink BEER and YELLOW FLAGS, a maid is there with an umbrella and a suitcase, with the Columbian Cartel surrounding her.

Roberta reveals that the umbrella is actually a SPAS-12 Shotgun, and proceeds to decimate the members of the Cartel with the shotgun, her bulletproof suitcase as protection, and a machine gun and grenade launcher inside the suitcase. Garcia jumps up to tell her to stop, but Revy holds a gun to his head. Revy and Roberta then proceed to fight, leading to a grenade giving Revy a concussion. The Lagoon retreats, as the Head of the Columbian Cartel reveal that she’s an ex-FARC guerilla-assassin and an internationally wanted criminal. Roberta drops grenades onto the ground, steals a car, and proceeds to chase the fleeing Lagoon Company.

Hotel Moscow decides to join the fight and assembles a squad to aid Lagoon. 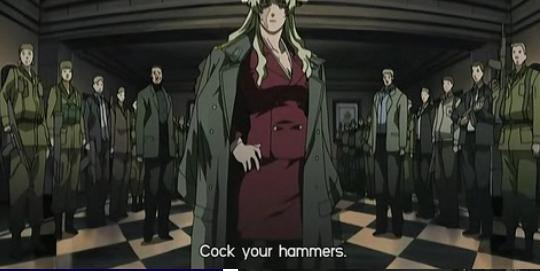 Meanwhile, Roberta manages to reach over and almost grab Dutch out of his car ’cause she’s THAT STRONG. Fortunately Dutch shot her radiator, so her car… dies.

Benny decides to drive through the small alleyways, but Rock says that going full speed on the main road would be best, as well as faster.

Even so, Roberta takes another car, drives off a roof, and crashes into the Lagoon’s car, head-on.

Roberta’s car crashes into the wall but the Lagoon’s car still works, so they head off. BUT ROBERTA RUNS, WHILE WEARING HIGH HEELS, AND CATCHES UP TO THEIR CAR. She takes a TRENCH KNIFE and SPIKED BRASS KNUCKLES and CLIMBS ONTO THE BACK OF THEIR CAR.

Roberta takes out a pair of SISTEMA COLT MODEL 1927S and starts SHOOTING AT THE CAR. Eventually, they reach a dead end and crash into one of those cargo-container things.

But Revy wakes up, so they start fightin’.

THAT'S PART OF THEIR FIGHT

BUT IT KILLS LIKE EVERYTHING. As they’re about to kill each other…

HOTEL MOSCOW APPEARS. RIGHT BEHIND THEM. WITHOUT THEM NOTICING. AT ALL.

Nevertheless, they still want to kill each other so they fight bare-handed, which concludes in a draw.

Next would be episode 11. An epic HONG KONG guy named MR. JACKIE CHAN (well, it’s actually BAI JI-SHIN CHANG), the BOSS of the ROANAPUR TRIAD, reveals that someone BOMBED HIS OFFICE. CHAN has epic PAPERS that he got from some STUPID GUY, and so people want those PAPERS. 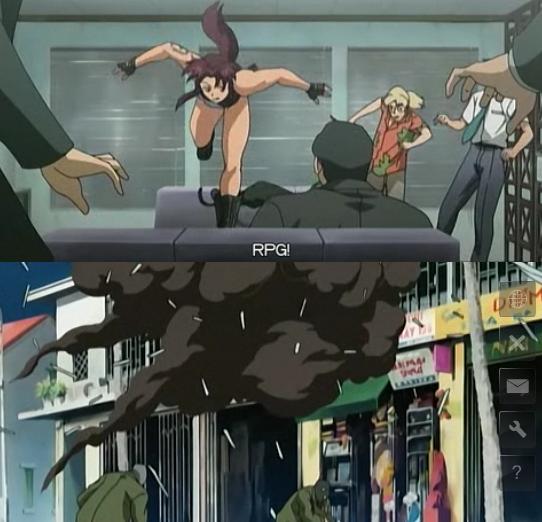 AND SO THOSE PEOPLE STORM THE BUILDING BUT MR. CHAN IS AN EXPERT IN GUN FU

OBLIGATORY THIS GUY IS AWESOME PICTURE

The papers are to the CIA, and concern a TERRORIST ISLAMIC GROUP, the PROTECTORS OF THE ISLAMIC FRONT.

They take the papers on the BLACK LAGOON but are pursued, so Rock and Revy go down to land. Takenaka MASAHIRO, a LEADER of the terrorist group, poses as their driver and take ROCK hostage, WITH THE BRIEFCASE. 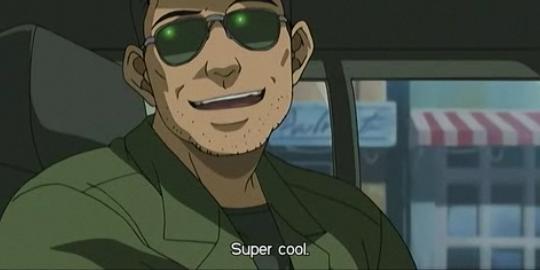 YOU ARE NOT SUPER COOL

Revy is saved by SHENHUA, a STEREOTYPE assassin and her getaway driver, Leigharch.

NOW you get knives

Rock and Masahiro talk about stupid stuff, while Masahiro’s comrade, IBRAHA, wants to torture Rock. Masahiro said to wait ’till tomorrow, and finds that the briefcase is empty. 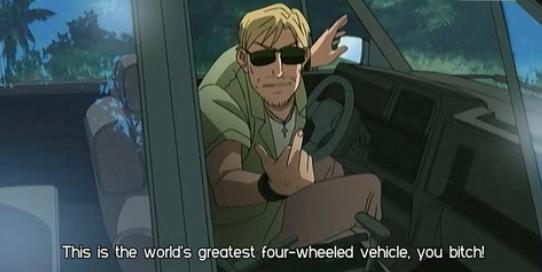 Not the greatest 5-wheeled 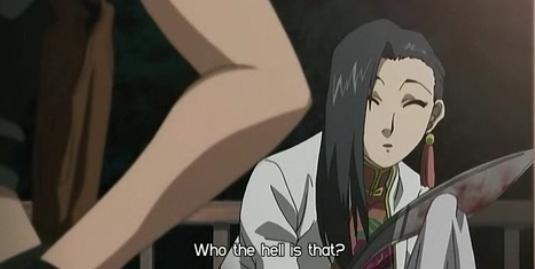 But they destroy them all. Ibraha wants to send everyone to retrieve the documents but Masahiro knows that that’ll be suicide, so he shoots Ibraha to death.

Well, what can I say.

It’s badassery to the most badass degree possible. I’m definitely looking forward to finishing the next two seasons of this.

But even so, there’s little semblance of plot; Black Lagoon starts with introducing people, then introducing more people with some action (first “arc”). Then more people, some backstory, more action (neo-Nazi “arc”). Even more people, even more backstory, even more action (Roberta “arc”). Finally, an immense amount of people, an infodump of backstory, and a hell ton of action (terrorist “arc”). We’re introduced to people who might become an important role in future plotlines (such as Balalaika). Or, those who we’ll never, ever, see again, even in flashbacks (such as Ratchman). And we have no idea who we won’t see ever again. I, for one, didn’t expect Bao (owner of the Yellow Flag) to be seen ever again, but he’s obviously there for comedic foil.

Inside the arcs, the plots are brilliant and well-conducted. There aren’t many info dumps, and the ones that there are are so stupid that you don’t need to know about them. The scenes are, for the most part, realistic.

The main problem I have (plot aside) would still be how they manage to shoot so many times and not get hit. The gangsters have ASSAULT RIFLES while they have PISTOLS, and they still beat up a couple dozen of them WITHOUT GETTING SHOT AT, EVEN ONCE. They WALK through hallways without being shot. Either this is some way to not make the characters anti-climatically die, or those people suck A LOT at shooting. THEY HAVE SNIPERS WHO CAN’T SHOOT. Just about the only success they’ve had was the guy with the RPG firing at Lagoon and Chan. AND EVEN THAT DID ABSOLUTELY NO DAMAGE AT ALL.

Add more plot, more realism; and this will have all the ingredients to become a masterpiece.

This entry was posted on 2010/07/08 by Mushyrulez. It was filed under Animanga and was tagged with Animanga, Anime, Anime Completed, Anime Half Season Review, Black Lagoon, Images, Mushz.