This can be taken so out of context

As opposed to the previous episodes in which an arc consisted of 3 episodes, the Fujiyama Gansta Paradise Arc is 6 episodes long.

The arc starts with Rock and Revy (who only has a regular pistol) travelling back to Japan with Balalaika, where something astonishing is revealed – Rock is the only one who can actually speak Japanese. Yes; in this anime, everyone speaks /English/, and so Rock has to translate for Balalaika (I should’ve watched the dubbed version >_>).

Anyways, Balalaika’s here to help! …the yakuza group called the Washimine… group. The group’s boss died, and so they rely on another… group called the Kousa Council. But Washimine’s yakuza, so they ain’t gonna rely on no Council and hire Hotel Moscow to KILL THE COUNCIL.

After translating (and blowing up one of the Council’s clubs), Rock and Revy decide to go to some Japanese festival place, where Revy demonstrates her SUPERIOR ENGRISH SWEARING SKILLS that NOBODY CAN UNDERSTAND (English or not).

Suddenly, some samurai guy comes; Matsuzaki GINJI is a STREET VENDOR who looks a LOT LIKE A SAMURAI but can’t possibly be, right? RIGHT?!

He and his friend, YUKIO, stop Revy from swearing.

The next day, GINJI meets with Tsugio BANDO, the UNDERBOSS of the… WASHIMINE GROUP. BANDO reveals that GINJI is indeed a SAMURAI (woah, never expected that did you?) and asks him to help him do stuff. Ginji declines.

Revy shows off her exceptional non-swearing ENGRISH SKILLS to a group of kids, but is caught off-guard and shot to death. Well, not really ’cause she was acting. Rock reveals that his parents aren’t at home, so they proceed TO THE NEXT EPISODE.

Balalaika is basically MASSACRING the KOUSA COUNCIL ’cause Hotel Moscow’s troops are that well-trained. The line is crossed when they kill a surrendering Council member, but BANDO can’t stop her; she remarks that “Mr. Bando, we will employ any means necessary to secure profits. And we are taking much of that risk. Therefore the decision making lies not with you, but with us.”

After the meeting, Rock gets beaten up by an idiot called CHAKA, even after his matrix-dodging skills.

Revy decides that she might need her Cutlasses after all.

Rock meets up with Yukio because he’s a lolicon after all. She reveals her last name: Washimine.

Bando tries to assassinate Balalaika with merely a katana. He obviously fails as Balalaika single-handedly dislocates his neck.

With the underboss dead, it is revealed that only a direct descendant of the boss, Washimine RYUZO, can become the head. Yukio’s his granddaughter.

SNOW IS MADE OUT OF WATER

…Anyways, Balalaika thinks to her childhood when her dream was to go to the Olympics and shoot targets. But fate was twisted and she had to actually shoot at targets… in Afghanistan. After the war, things were peaceful until her second-in-command died. At his funeral, Balalaika commanded the units of her squad and joined the Russian Mafia; Hotel Moscow.

Meanwhile, Yukio severs all ties to her old life by making her friend cry. She orders a counterattack on Hotel Moscow by killing some stupid ex-KGB guy, Laptev, and Ginji reveals his awesomeness at slicing people’s heads off.

Revy gets her pistols.

Meanwhile once again, Yukio and YOSHIDA, some other random person, go back to her house, where it is revealed that CHAKA IS WAITING. 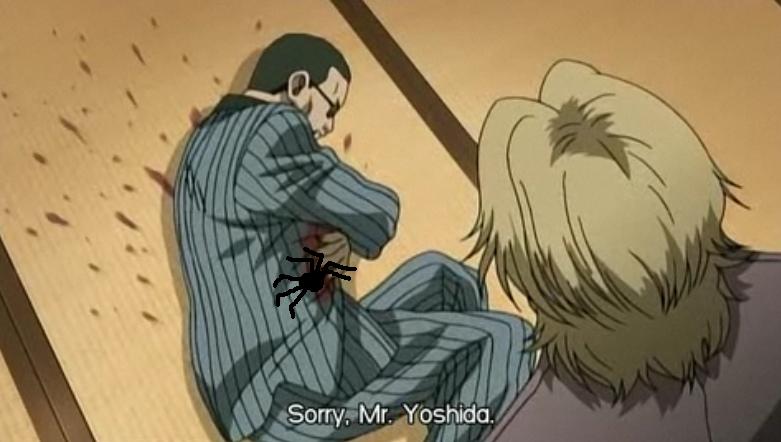 "Sorry, there was a spider there. Actually, it's still there, just let me shoot him off..."

Ginji and Revy decide to TEAM UP and RESCUE YUKIO. When asked why, Rock replies that “I hate it when kids, who should grow up normally, can’t.”, obviously insulting Poplar’s absence of height.

They arrive at a bowling alley where Chaka is just preparing to… do bad things to Yukio (NSFW).

But Ginji and Revy are so pro that they KILL ALMOST EVERYONE without a single injury. After dealing with rich philanthropists who can’t pronounce “give up”, Rock comes and hits Chaka with a bowling pin.

Chaka shoots everyone who tries to run away (cause he’s Japanese), but Revy meets up with him in a TRADITIONAL WESTERN DUEL!

..not. She kicks him and Chaka gives chase only to encounter… Ginji.

They duel, gun vs. sword style. Ginji CUTS A FREAKING BULLET IN HALF, CUTS CHAKA’S GUN IN HALF, and then CUTS CHAKA’S ARMS… off (which is sorta in half). He then shoves Chaka into the water where he drowns.

Yukio talks with Rock about how she hates him and such.

Balalaika starts the destruction of the Washimine Group, killing almost 70 percent of everyone in the group in ONE DAY.

Yukio thus orders that everyone abandon their strongholds to avoid the attacks. She then robs a bank with Ginji in one of Hotel Moscow’s vans, leading the police to chase Hotel Moscow.

Rock tries to tell Balalaika to stop the madness. Balalaika responds by pulling a gun on him, almost killing him. Rock somehow escapes with something witty he said.

The kids meet Revy again. Yukio gets a gun.

The penultimate episode is over.

Rock changes his standpoint and asks Balalaika to COMPLETELY DESTROY the Washimine group. That way, Yukio can continue living her life normally. Balalaika kills the people of the Kousa Council, and then informs Rock that everyone in the Washimine group has already dispersed; thus Hotel Moscow will stop attacking them. She leaves and the police that surrounded the building don’t realize she’s an internationally wanted criminal until… too late.

Yukio CRASHES her van into Rock and Revy’s motorcycle, then opens fire.

But Rock can’t possibly die, so he… survives.

And then Yukio and Ginji KIDNAP him to lead them to HOTEL MOSCOW.

Eventually, they stop and Revy and Ginji decide to fight, Sword vs. Gun once again.

Rock and Yukio watch and talk on the sidelines; eventually, Yukio admits that she wished her normal life would continue. This makes Ginji hesitate for a fraction of a second; enough for Revy to deliver the finishing blow, ending Black Lagoon: The Second Barrage.

This Black Lagoon is EVEN MORE BADASS than the first season. The lack of plot that I was whining about earlier is fixed, realism is added (somewhat), backgrounds are revealed, and guns keep on shooting.

That also solves my character issue; the reason there’s a metric shit-ton of characters is that most of them are plot-specific. Take One Piece as an example. There really is no main plot; he “wants to become the Pirate King” and “find One Piece”, but it’s a hidden treasure so you can’t really just say “I’ll walk over there and I’ll find the treasure”. It seems like there’s a plot, but there really isn’t.
Nevertheless people keep watching/reading it. Why? Because of the individual plots. Each individual island Luffy goes to introduces a bunch of characters; some who we’ll never see again (except on the front cover of the manga issues), and others who may reappear 100 chapters later. Constantly (cough cough Buggy what 5 times now?).

Black Lagoon’s the same. There’s no plot (and people know this), but each arc has a plot. Black Lagoon introduces so many characters because you don’t need to remember them. If you ever do, they’ll probably do something like “Oh yeah, I’m so-and-so, remember? I did such-and-such for you!” *cue flashback*.

Besides, what’s the chance that you will meet someone that you just killed/resides in Germany, Colombia, or Japan while you’re in Southeast Asia/severely wounded again?

Which brings me to my next point; Black Lagoon is realistic. The sad truth is, you DON’T meet someone you just killed again. The sad truth is, our lives DON’T have a plot. We’re not aiming to be the hokage; we’re just stupid anime watchers that don’t have anything better to do (because anime is that awesome?).

But obviously it’s impossible to slice a bullet with a sword, or at least extremely improbable. Doing it twice in a row is even stupider. A sword can slice a bullet in two, and quite easily; but for the sword to even hit the bullet takes a lot of luck.

This entry was posted on 2010/07/14 by Mushyrulez. It was filed under Animanga and was tagged with Animanga, Anime, Anime Completed, Anime Half Season Review, Black Lagoon: The Second Barrage, Images, Links, Mushz, Videos.