Densetsu no Yuusha no Densetsu 2

And in a completely different topic: http://www.youtube.com/lifeinaday <- some guy's trying to stalk every single person on the Earth for one day. Uh huh. Happens to be a #SuicideSaturday too. :/]

Because of that RYNER decides to JUMP ON A TRAMPOLINE

Where it is revealed that…

…tl;dw: they’re back in time (how many years I don’t know), in a school. A SCHOOL WHERE PEOPLE TRAIN TO FIGHT TO THE DEATH BECAUSE THIS IS SPARTA

And so Ryner’s just some LOSER GUY who SLACKS OFF and is obviously the WORST PERSON IN THE ACADEMY because all people who sleep all day aren’t BADASS. Anyways RYNER, SION, and KIEFER, this other person who is obviously not awesome enough to be mentioned in the future, decide to make a TEAM and BEAT UP other people in the ACADEMY. Ryner’s obviously had SPARKMAKING lessons from YUUKA so he fires GIANT MASTER SPARKS at EVERYONE.

…Not really. Sion then reveals that RYNER was trained in some WEIRD MILITARY ACADEMY where everyone turned into LETHAL KILLING MACHINES and RANDOM CRAP LIKE THAT. He then asks Ryner to JOIN HIM in RULING THE WORLD but Ryner declines.

A BUNCH OF STUPID PEOPLE then chase Sion but FERRIS appears and uses her special attack: FERRIS WHEEL

Well not really, that was just a stupid pun. She just waves her dango around and everyone runs away (although one person stole some dango for his nice hat).

The FAT LADY from EPISODE ONE IS STILL FAT 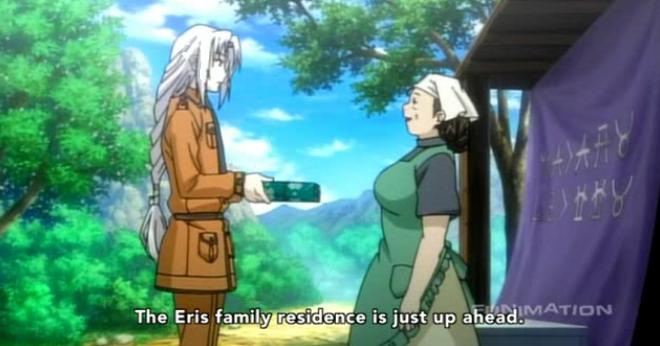 Then ERIS reveals that her SISTER, IRIS, is actually A SYNONYM for a PART OF THE EYEBALL wait what

BEST CHARACTER OF THE SERIES

And then it is revealed that the kingdom of ESTABUL has invaded WHATEVER-COUNTRY-THEY’RE-IN, so the students have to MOVE to the FRONT LINES.

After Kiefer meets with Ryner and tells him to run away ’cause he’ll die if he gets attacked by RANDOM PEOPLE WITH SWORDS, Eris and Iris reveal (after some torturing) that ITS A TARP and that THE ENTIRE WORLD’S UNDER A TENT.

So apparently, this episode (specifically the beginning) “set a much darker tone for this series”, with the dead dog and all that – I can’t help but feel this is the exact opposite of Occult Academy. Occult Academy was supposed to be serious, creepy, and all that, but it’s just comedy. This on the other hand, is supposed to be like most other RPGesque anime; a bunch of people fighting a bunch of other people with swords and stuff and no real plotline. When there is a plotline it’s probably really, really stupid.

But tl;dw presents an actually possibly interesting storyline – epic battles between large factions and all that, without even presenting a storyline. If you’ve watched the previous episode, you’ll notice the only real storyline you can infer from it is that they’re searching for LEGENDARY TREASURE; however, it’s obvious (though not /too/ obvious) that there’s something much deeper. The first ‘flashback’ to the LEGENDARY HERO also set the same dark tone to it.

Tl;dw’s got potential. Right now, it’s not perfectly executed with us knowing about everything, but I’m sure stuff’ll get revealed and such soon.

Also apparently “we discover in the first few minutes of the episode that Ryner’s attacks have a range of 20!” But I didn’t see that :<

Oh yeah; IN AN ALTERNATE STORYLINE, RYNER doesn't jump on a trampoline, he DIVES into a SWIMMING POOL and so they don't have to fight ESTABUL. Isn't that just AWESOME? 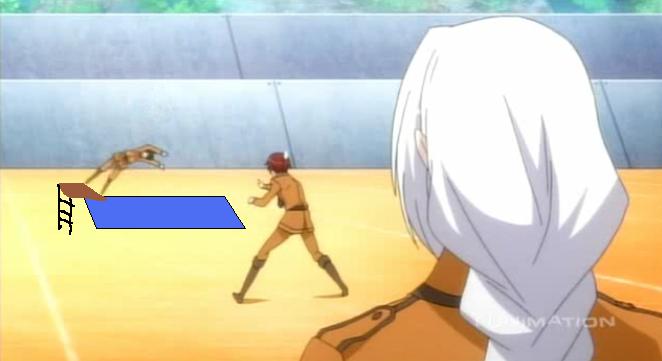 This entry was posted on 2010/07/23 by Mushyrulez. It was filed under Animanga and was tagged with #SuicideSaturday, Animanga, Anime, Anime Post, Densetsu no Yuusha no Densetsu, Links, Manga, Mushz, Videos.