“I don’t want to be in a poorly written post about a series that aired months ago!!”

(If you don’t care about the story, just scroll down until you see the picture of a hand. There’s nothing particularly interesting with my storytelling)

We continue off from last time, when Kaori and Akira are just about to VALIANTLY BREAK INTO KANEMASA. VALIANTLY.

However, Natsuno finds them, and the trio all think that something really fishy is going on in the house, with y’know dead people walking and all that. They dig up Megumi’s grave to find it empty – obviously, this means that vampires exist. Though it is true, who would want to take a dead body out of a grave? So yeah, this does add credence to the vampire theory.

Oh, and then a vampire attacks them. Yeah, that just about proves it. They ‘kill’ it, bury it, and in the morning it’s gone and alive. It’s gone and got a life. A live.

Our favourite character, Masao, returns from the dead, dying because he couldn’t move and so nobody realized he was dead until he… died. Eh, whatever, he’s back and as cool as he was when he was alive. He’s now an okiagari, one of ‘the Risen’, with Tatsumi revealing some crucial points in being undead – they can die (again, and perhaps forever) when their heads are chopped off or if a stake is hammered into their hearts, and they don’t breathe and have to drink human blood to survive. However, Tatsumi’s a special case, as he doesn’t need to drink human blood and can walk outdoors during the day.

He then allows (rather, forces) Masao to eat a fellow villager, but he drinks a glass of blood instead, as Masao’s a COOL DUDE who wouldn’t kill other people.

Seishin’s life is then saved, somehow, when he tells Suwako that he thinks Sunako’s an okiagari, because, well, she either is, or just really likes to pretend to bite people on the neck.

Setsuno, Mikiyasu’s mom, next falls prey to the okiagari, and Toshio promises to protect her. Seishin then imparts knowledge that Ishida and the records of deaths are missing, and so Sotoba is alone in solving its own rather dark problem. Toshio and Seishin team up, using an Occam’s Razor (though in the opposite way of what you would imagine – instead of excluding nonsensical, occult theories, a nonsensical occult theory is the simplest explanation) to guess at the existence of okiagari.

Meanwhile, a young, really, really scary ventriloquist, Matsuo Shizuka, decides to wait in Natsuno’s room to wait for him.

By young, I mean like, kindergartener her-puppet-is-taller-than-her young, and by scary, I mean… holy shit. 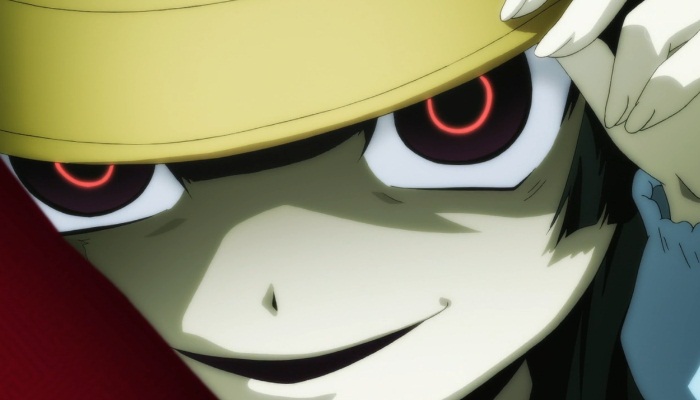 What does happen, though, is Ritsuko (the green-wtf-haired nurse) meeting a revived Nao (wife of Mikiyasu, not cute girl from Yakumo) while going to the clinic, and Toshio shouts at Nao that they will NEVER. ENTER. THIS. CLINIC. EVER. AGAIN!!

Yeah, fat chance. Setsuko leaves, and Tatsumi knocks Toshio down. The okiagari eat her, and since the only way they can come into a house is if they’re invited, they leave Toshio alone.

Ikumi, the TOTALLY NOT INSANE PERSON, knows that Kanemasa is the root of all evil, and she also knows that Toshio and Seishin AREN’T DOING ANYTHING, and that the ONLY PERSON WHO CAN SAVE THE VILLAGE IS HERSELF.

As Ikumi spreads her LIES AND SLANDER, she has only one choice left to do – call the Kirishikis out into the sunlight (like my use of puns?). Toshio examines Seishirou Kirishiki, finding out he’s alive, and Ikumi presumably dies, soon later.

Shizuka isn’t in Natsuno’s room when he came home, as she was attacking Ozaki Clinic as well, but Natsuno’s parents already invited her into their house, so she can basically kill him whenever she wants. What’s more, his parents rip off all of his protective charms, basically killing him. Megumi wants to kill him instead (yeah, sure), but Tatsumi firmly objects.

And of course, an okiagari attacks him that night.

It’s Tohru, and he runs away in shame. Megumi meets him outside, laughing at his failed attempt, and vows to kill Natsuno personally.

Natsuno tries to find Tohru, but meets Tatsumi instead. The okiagari start to chase him, but before he can run, Tohru bites him in the neck.

HE IS A VERY GOOD PAINIST

This has got to be my longest post ever.

Is this storytelling fantastic or what? I mean, with this, at exactly the halfway point (Episode 11), we’ve got what, four loose plot threads already, all at their climax – what’s happened to Natsuno/Tohru, what’s going to happen with Ikumi/Toshio, what’s going to happen with Sunako/Seishin, and what the okiagari are going to target next. This setting is like, Durarara, in that there are so many character it shouldn’t make sense, but it does! When they reference a character from like episode 3, somehow, SOMEHOW, we understand what they mean – when they say ‘xxx has died’, we shouldn’t know what they’re talking about, but we do. When they continue on with a plot thread from two episodes ago, we should have forgotten it, but we don’t.

I’m writing this post in March, more than, what, four-five months after I’ve watched these episodes, and the details (well, not the fine details) are still in my head. I still understand what I’m talking about. The story still makes sense.

Now, either I’ve got something fundamentally wrong with my ratings by starting in a bad year, but I think I’ve got to give this an 8/10 (along with Madoka, probably). It’s just… brilliant.

This is the type of plot that mystery/horror anime should have. It’s just…

(This is also the type of story that J.C. Staff would never animate~!)

I haev a mushroom on mey hdae

Also, it was kinda strange that nobody realized that Masao was dying. You know, even if you hate him, if your son’s paralyzed you don’t leave him in his room and do nothing. You should probably, y’know, feed him once in a while? Though the thing is, even with all of these inaccuracies (how could sucking blood provide enough energy to move for an entire night), you just don’t notice them. Some shows, when they get things scientifically (hah) ‘incorrect’, it stands out like a sore thumb, but for this, the entire thing is scientifically incorrect. I’m pretty sure if I knew doctor-tongue, I’d find that all the fancy explanations Toshio says is incorrect too.

But nobody cares, because the plot already overcompensates for that.

This is also really Mafia-esque, except with action – it’s a fast-paced, who-can-convince/eat-the-villagers-first anime where nobody does stupid things! Even the dead shaman, Ikumi, behaves like you’d expect someone with this knowledge to behave. If I were her, I’d definitely do what she just did (and get killed, but I’d get killed either way). There’s no Kazuya here; everybody’s /smart/. They do things that you’d expect them to do. Sure, you get frustrated at some people, like Natsuno’s parents, but they’re not stupid. What would you do if your son started putting superstitious things on his wall? He’d be obviously mentally insane, right? Take them off.

“It’s not like they broke into my clinic and killed Setsuko or anything!”

In conclusion, this is just great. 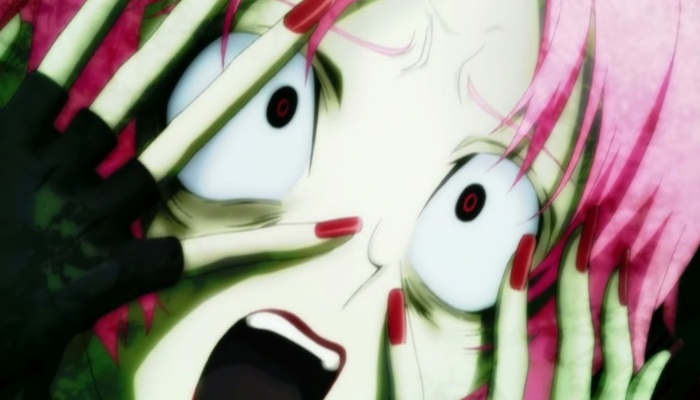 (Post-Post Edit: Also, as for the Kirishiki problem, the dad is probably a human, and the mom an okiagari. It would explain Tatsumi’s ability to go out in sunlight and Sunako’s ability to… I’m not sure)

This entry was posted on 2010/11/26 by Mushyrulez. It was filed under Animanga and was tagged with Animanga, Anime, Anime 2010 Summer, Anime Half Season Review, Images, Links, Mushz, Rewrite History, Screenshots, Shiki.