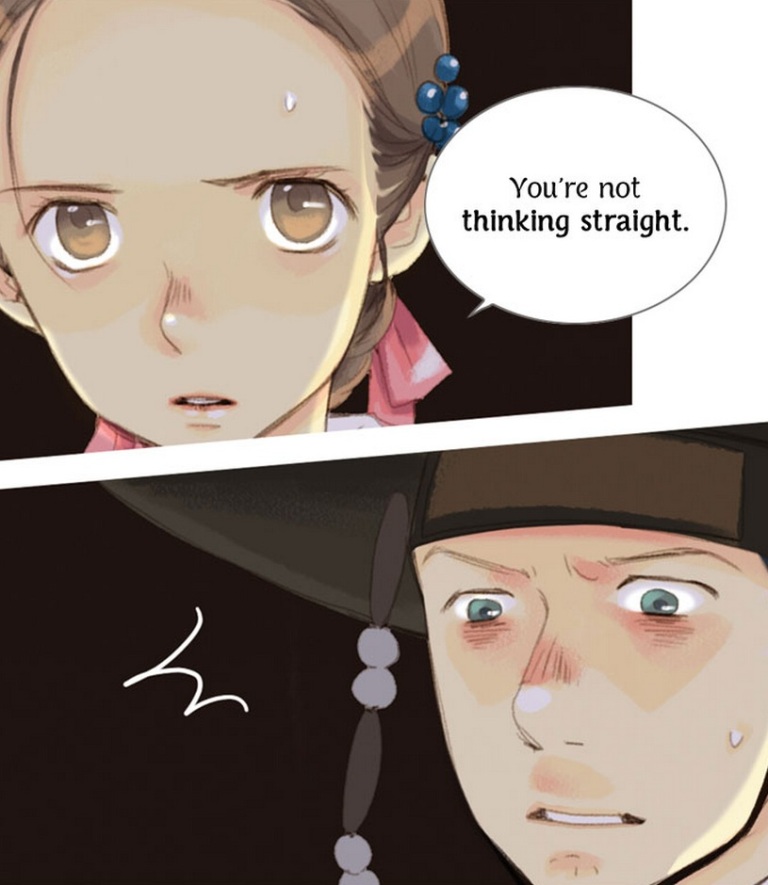 I was about to post a long revelation how Korean webcomic manhwas all seem like movies, or complain about how Korean names and years screw me up. Turns out that I already did that, in a post that was published, uh, exactly eight months after this post, I guess. In my attempt to clean up all of those posts that I didn’t post (hah!), I shall rewrite all my posts so that I do not fall more than a year behind!

I guess I failed because this post was published on November the 29th, and it’s already December 22nd of… next year. :|

Tsk, tsk, tsk. I shall answer your unasked-question with a remark on the foolishness of my imagination. Chapter 13 of this manhwa was written on June 15th, 2010 – which, if I may add, is several months earlier than November 29th, 2010.

The prologue begins in the 20th year of Jeongjo‘s reign. Jeongjo was the King of Joseon (modern-day Korea) from 1776 – 1800, so the 20th year of his reign must be in 1796. Kim Manduk is a Great Merchant who sold all of her possessions to save the people of Geumgang Mountain from drought; however, she is emo and longs for someone who is dead like a singular die.

Flash forward to the 27th year of Jeongjo’s reign, and Kim Manduk is a little girl-WAIT JUST A MINUTE!

You have no idea how much this confused the heck out of me. Since this is the 27th year of Jeongjo’s reign, this must be in the future, right? But Manduk is a little kid, so this story is either about time travel, or Kim Manduk is Kim Manduk’s daughter.

I went for the latter explanation until I found out that Kim Manduk’s mother was someone called Eunhong. So, did Koreans count their dates backwards? Does ‘Jeongjo year 27′ mean ’27 years before Jeongjo died’ instead of ‘the 27th year of Jeongjo’s reign’?

Turns out it was a typo. It was a flashback to the 27th year of /Yeongjo’s/ reign. King Yeongjo ruled from 1724 – 1776, and the 27th year of Yeongjo’s reign would be in 1751. Thus, it was probably the 57-year-old Manduk thinking of her past when she was twelve years old and ran with all the swiftness of a girl with broken legs.

the origin of QUALITY animation

Some granny, ‘granny-san’, was a female physician for the government at Jeju, a small island off Korea. Granny-san raised her child, Eunhong, at Jeju. Eunhong eventually grew up, became a female physician (because we all know nurses are hot), and ‘got it on’ with Kim Heon, an exiled court official. Of course, being an exiled court official is bad enough, but ‘getting it on’ with a government employee while in exile would’ve given him CERTAIN DEATH, especially since Eunhong now has a daughter.

Thankfully (?), some jealous kisaeng murders Eunhong in jealous rage. A kisaeng is like a geisha, but they kiss more, sing more, and are more Korean.

Granny-san promises to take care of Eunhong’s daughter, but without letting anybody know she’s Kim Heon’s daughter – otherwise, Kim Heon’s reputation would fall down the proverbial well off the coast of Finland. Even Kim Heon doesn’t know that Eunhong had a daughter (I suspect that he ‘gets it on’ with more people than the manhwa tells us)!

And now in the 27th year of Yeongjo’s reign, Eunhong’s daughter, Kim Manduk, is all grown up and educated in the ways of being a true kisaeng, including such artistic activities such as ‘shedding’.

(Shedding soon fell out of favour as a popular sport after the Europeans knocked some sense into their sheds.)

Manduk works for a guy, Kang Geman, and OH FUCK WHY AM I WRITING SO MUCH PLOT SYNOPSIS

OK, I’LL GET THIS OVER WITH, WITH THE DENSEST SYNOPSIS POSSIBLE:

Manduk works for Kang Geman, meets a jealous girl who will never be seen again, and loves Jeong Doung’s son, Jeong Hongsu. Kim Heon is un-exiled and arrests Kang Geman and Jeong Doung for illegal trading. Manduk and Hongsu are tearfully parted, for Granny-san whisks Manduk off to Jeju Island.

Three years later, Manduk is the GREAT KISAENG KIM MANDUK and Kang Geman’s son, Kang Yuji, wants to buy her. Manduk refuses because Hongsu appears and is tearfully reunited with Manduk. BUT THEN YUJI TRIES TO RAPE MANDUK and… uh… yeah?

So that’s it. Phew, for a second, I thought I was going to write a LuRa post! Which isn’t a derogatory term; it’s just a post that has too much plot synopsis. I try not to do that because I don’t like boring posts and OH MY MADOKA WHAT AM I DOING WITH THIS POST

/bores a hole into my head as punishment

“What I’m trying to say is, even after two years of blogging you still have the intelligence of a twelve-year-old.”

Author’s Note: I do not have the intelligence of a twelve-year-old :(

I don’t think I did a good job persuading you guys to read this manhwa. Like Dr. Frost (oh boy, linking things twice!), Kim Manduk reads like a movie. There’s plenty of cinematic effect with tons and tons of black space, slow dialogues, and hardly any action. Unlike manga, where every frame of action is drawn in, the odd frame of action is only a frame. They’re like strobe lights, showing only a snapshot of the action, and letting your brain fill in the rest. Lazy? Sure. Effective? Very.

But it doesn’t quite have the anime feel. Maybe there’s just too many flowers everywhere (but look at Chihayafuru…), or maybe because the AnoHana-esque drama is so contrived (ha, I learned a new word today!). Compared to something like [Warning: Manga Spoilers] Usagi Drop, the love in Kim Manduk is so /pure/, it’s so /perfect/, that it’s almost impossible.

Do you know what it feels like? It feels like a drama. A couple of years ago, I was watching a Chinese drama with my family, Da Chang Jin. It was about a mere cooking-girl who eventually became the King’s personal physician, and the only royal female physician in China’s history. Kim Manduk was similar to this in so many aspects – the impossible romance, the heinous jealousies, the mysterious family histories and royal court drama. Even the cultural aspects and ways of dressing were the same!

that is to say, all of the people in the background had no faces

Kim Manduk /needs/ to be made into a drama. It’s almost like it was a drama that turned into a manhwa.

But it couldn’t have been, because the author is obviously an amateur. Even though each chapter is in full colour and the flowers are drawn so flowery; even though the author emphasizes every single part of Korean culture through its customs, its clothing, even right down to state affairs; even though the author creates such a Korean drama-like setting, with dozens of characters, each with their own motives and intents, it can’t be a professional work.

It’s posted on a webcomic site. Professionals publish their works.

The art quality is dubious. For reference, see the above and below images.

THEIR NOSES ARE GIGANTIC

And thus I conclude that the author is obviously someone who’s watched too much Korean drama, and with too much time on his hands, creating a fictional perfect character in a story that would scream ‘typical Korean drama!’ if it were.

Imagine my surprise when I found three things out.

1. Da Chang Jing is a Korean drama. That’s why the culture’s so similar, why the fashions are the same, why it seemed so related to Kim Manduk – they take place in the same setting!

3. The Great Merchant Kim Manduk is a Korean drama.

P.S. This is how I found out that Manduk was 12 years old at Yeongjo year 27. At first, I thought she was 6 or 7 (because the art is so ambiguous), and that she was only 10 when she became a kisaeng. By the way, kisaengs are basically prostitutes, so, being a prostitute at ten years old was rather shocking…

P.P.S. It doesn’t feel much better to know that she was a prostitute at 15 years old, though…

This entry was posted on 2010/11/29 by Mushyrulez. It was filed under Animanga and was tagged with Animanga, Completely Unedited, Images, Links, Manga Quarterly Review, Manhwa, Mushz, Rewrite History.