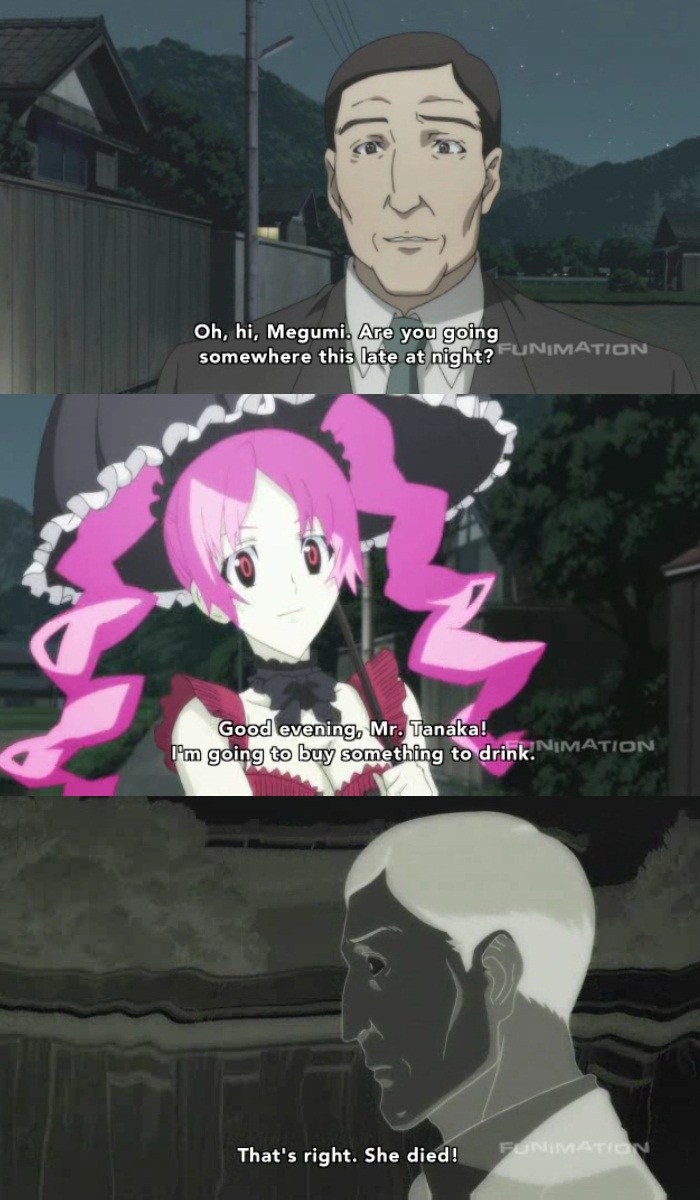 The infected Natsuno tells them to run while they can, but being stupid little kids, they don’t. Instead, they annoy Natsuno’s dad by putting WEIRD RURAL SUPERSTITIOUS THINGS in Natsuno’s room like STUPID COUNTRY KIDS would do, as THEY HAVE NOT RECEIVED THE INTELLECTUAL BAPTISM OF RATIONAL THOUGHT. Of course Natsuno’s dad will NOT submit to stupid occult shit, and so the only explanation for all these random deaths is an epidemic. There’s no vampires, no weird stupid mythological creatures only stupid rural people would think up of. 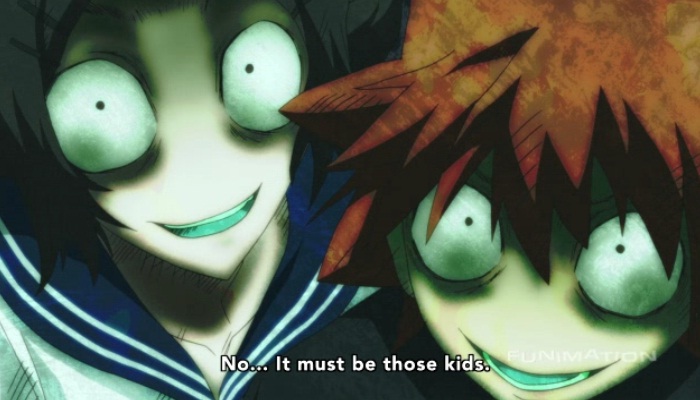 Sorry, because every night, Tohru comes to SAAAHCK Natsuno’s BLAAAAHD. For some reason, even though the okiagari should be able to simply drink blood from donations, they must EAT EAT EAT and kill their victim. Natsuno realizes that the okiagari are simply trying to turn this into a completely okiagari village – after all, it’s basically cut off from the outside world, and if it turned into a village of okiagari, not only would nobody notice, but nobody would care. Since everyone who’s died in the village actually moved out of the village and quit their jobs in the village, the total village death toll is… zero. Nobody has died. There’s no reason any external source should come into the village. Nothing’s happening.

Even though Natsuno’s dad promised to take him to a big hospital to check his health, Natsuno still dies. That’s right. Our protagonist (not otamot) is dead.

Kaori and Akira, being stupid kids, still don’t run away. Instead, they just sit there and PREPARE FOR THE EPIC BATTLE, sharpening stakes and the like.

Akira cannot take this anymore! So he goes to do things HIMSELF, the MANLY WAY – stabbing vampires with a wooden stake. YEAAAAAAH GO AKIRA G-

He’s captured, tied to a stake in front of a vampire, and now Kaori thinks all of her family members are dead, and goes insane as well.

Nao just wants everyone in Mikiyasu’s family to rise up from the dead (as she’s an orphan) – hence why she killed Mikiyasu, her son, Mikiyasu’s mom, and now Tokujiro, Mikiyasu’s dad. While killing her father-in-law, she forces him to not go to Ozaki clinic, so that Toshio can’t do anything.

“Actually, I’m also pretending to be an octopus. Pashoo pashoo.

Muroi Shinmei, Seishin’s father, is dying to see Tokujiro, and when they meet, they say nothing. Tokujiro dies soon later, and now everyone from the construction company is dead. He doesn’t rise up. Nao is alone.

Shinmei may have noticed that everything’s because of Kirishiki, but Seishin knows no more, as his father has disappeared, leaving behind only a letter of invitation – an invitation to the okiagari to enter his room, but not Seishin’s or his wife’s.

Sunako used to be in a really wealthy family, until one day, her dad’s friend brought a weird man (Seijirou?) into her house, turning her into an okiagari. Fleeing, she travelled around the world trying to find her family until so much time passed that even her sister would have died.

Kyoko, Toshio’s wife, is infected. As she rises up, Toshio goes all ‘FOR SCIENCE!!’ and experiments on her. Brutally. It ends with him stabbing her in the heart multiple times with a wooden stake until she dies. A second time. Seishin arrives just as Kyoko dies and walks away in disgust. While leaving, he sees a revived Tohru and then heads to Kanemasa to have tea with Sunako…?!

Even with a recording of the entire proceedings, nobody believes him. He barges into the village office to demand records of deaths – zero – and is cornered by Chizuru with her full office of vampires.

There’s a new funeral home and clinic, Ebuchi Clinic, in Kami-Sotoba, with weird owners in both. Ebuchi, the owner of Ebuchi Clinic, is capable of arriving within seconds of a phone call (or he already predicted it would happen), and Hayami is a weird guy with horrible tastes in funerals. Rather, he replaces bodies with empty caskets so that the shiki don’t have to dig up bodies anymore.

People start dying, one after the next. Tatsumi is actually a jinrou, which means he has all the powers of an okiagari, except can also walk in daylight. Natsuno’s a jinrou too. Wait, what? Remember, he’s dead. He visits Toshio, and they vow to destroy all the shiki. 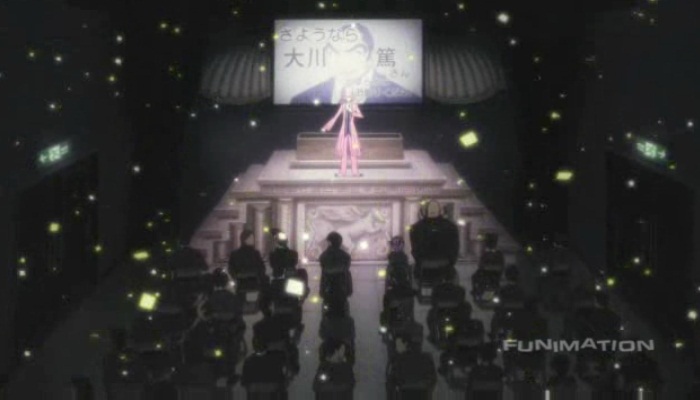 The shiki cannot eat food, but can drink non-blood liquid when they have to.

Kiyomi, the fat nurse, dies in a moving truck, and the leader of the November Kagura dance is also bitten by okiagari moments after realizing that most of the village are now shiki. Many more people are going to Ebuchi instead of Ozaki, Ritsuko is bitten, and Chizuru visits Toshio, with Seijirou shooting apart Toshio’s last method of defence. 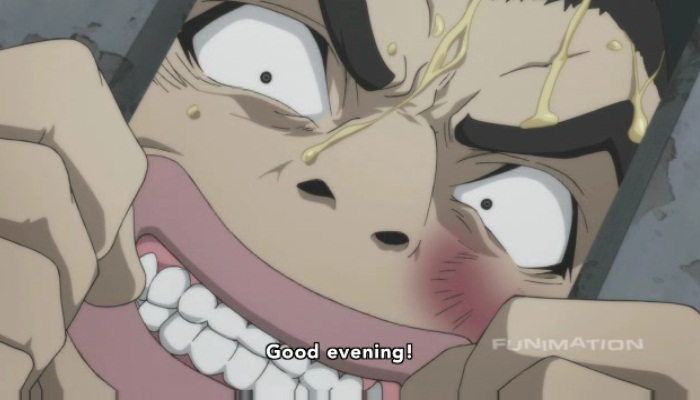 First of all, octopuses (octopi is basically a hypercorrection) totally go pashoo pashoo.

I just don’t get why Toshio just doesn’t show the villagers his clip. I mean, that’s complete evidence that okiagari exist, right? Sure, they’ll look at him very funny for a really long time, but then they’ll know that okiagari are here, and that people do rise from the dead!

I also don’t get why the shiki don’t just kill Toshio, Natsuno, Seishin, Akira, Kaori, and Ritsuko from the very start! They know about the existence of shiki, so why not just eliminate them? Why let Toshio get inside your trap of an office and then let him go? It just doesn’t make sense (and/or there’s something much deeper going on – perhaps if they’re bitten, they’d tell the other villagers? I don’t know).

Heh, as I said last time, the people are still smart here. Natsuno’s dad is one hell of a retard in this scenario, but in every other scenario he’s a rational person. What’s the chance okiagari exist, anyways? What they said about being baptised by intellectual rationalism is interesting, too, because the simplest explanation is to believe that they exist – once that happens, everything makes sense. There’s really nothing in science saying that through some weird, alien chemical or technology, people can’t revive. Since we don’t know about technologies like that, being ‘rational’ isn’t going to solve anything.

About that, Azusa (Natsuno’s mom) is a very strange character. She needs more development – she seems so… emotionally distant – maybe she’s been bitten already? We won’t know, cause I think she’s gone forever. Also, her argument doesn’t make sense – just because something has a low possibility doesn’t mean it’s impossible. It just has a low possibility.

It’s also very interesting what this show says about people not being aware, or people not wanting to be aware. The villagers probably all know, deep inside their hearts (ah, haha) that vampires and shiki exist. They just don’t want to know – I mean, what sort of cruel nightmare would that be? So they cover up what they know with ‘rationalism’ and eventually, consciously, they don’t know.

It’s doublethink, in a modern (?) world. 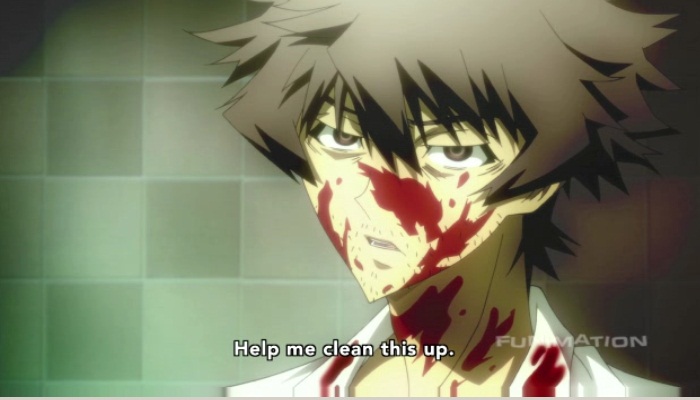 This picture is titled badassface.jpg

Also, FOR SCIENCE!! Toshio was simply badass here, but Seishin does raise some major points. It’s like Shiki’s just trying to pit every major battle against every major battle in an anime that’s STILL FULL OF ACTION. His actions are definitely debatable, but I still love both Toshio and Seishin’s characters.

The length of flashbacks in Shiki are also brilliant – it’s not like Naruto Filler episodes, where half of it is flashback, but there’s just one-two minutes of crucial flashback near the beginning. It’s just amazing.

Our favourite character’s back!

Even Masao is better than Megumi. Megumi is a horrible, horrible, evil, royal bitch.

Of all the okiagari, Megumi is the one I hate the most. She deserves to die. THREE TIMES.

Do you know what she deserves?

To get run over by a tractor.

AND THEN have a stake driven through her heart.

Dig your own grave gets a whole new meaning

This entry was posted on 2010/12/03 by Mushyrulez. It was filed under Animanga and was tagged with Animanga, Anime, Anime 2010 Fall, Anime Half Season Review, Completely Unedited, Images, Links, Mushz, Rewrite History, Shiki.