We start with a flashback on a full-colour opening.

Anyways, Warrick’s main job is being a male prostitute, ever since he was 13, but now he only does that on weekends.

While Warrick’s… heh, working, Nicolas and Alex go on some errand, Nicolas selling guns and Alex noticing that some little kid took another little kid hostage twenty-odd years ago.

Vague flashbacks happen with someone putting a cigarette in Warrick’s eye and Nicolas looking really angry at something. 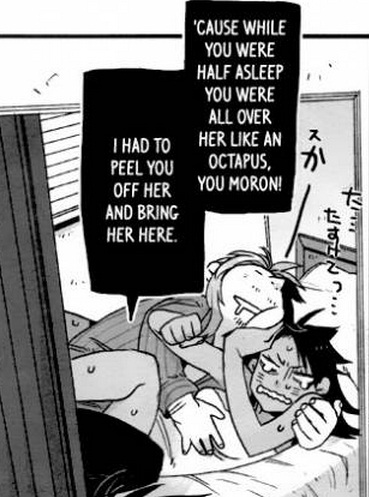 On the whole, this seems to be one of those dark shounen-esque mangoes; we have this really modern setting in the darkest darks of corrupt society, and there are a bunch of people slicing another bunch of people up. I’m still not sure how this is produced; apparently, it’s serialized in Comic Bunch, which is now… not existing. Eh, I don’t expect many people to care about this.

This entry was posted on 2011/04/11 by Mushyrulez. It was filed under Animanga and was tagged with Animanga, Gangsta, Images, Links, Manga, Manga Post, Mushz.