Now a certain girl was sick, named Sayaka, of Mitakihara, the town of Mami the witch-hunter, and Kyouko. Therefore her parents sent unto her, saying, Lord, behold, she whom thou lovest is sick. When Madoka heard that, she said, This sickness is not unto death, but for the glory of God, that the Daughter of God might be glorified thereby. Now Madoka loved Mami, and Kyouko, and Sayaka.

When she had heard therefore that she was sick, she abode two days still in the same place where she was. Then after that saith she to her companions, Let us go into Mitakihara again. These things said she: and after that she saith unto them, Our friend Sayaka sleepeth; but I go, that I may awake her out of sleep. Then said her companions, Lord, if she sleep, she shall do well. Howbeit Madoka spake of her transition: but they thought that she had spoken of taking of rest in sleep. 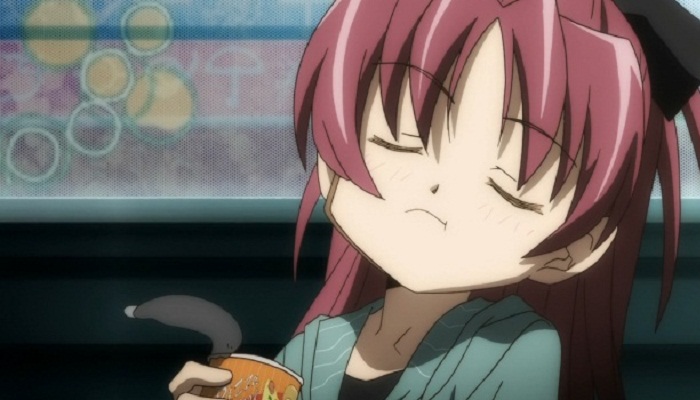 Then said Madoka unto them plainly, Sayaka has became of a witch. For all girls who doth wish of wishes shalt spread grievances as witches. And I am glad for your sakes that I was not there, to the intent ye may believe; nevertheless let us go unto her. Then said Homura, which is called Akemi, unto her fellow companions, Let us also go, that we may die with her.

Then when Madoka came, she found that she had transitioned into witchdom four days already. Then Kyouko, as soon as she heard that Madoka was coming, went and met her. Then said unto Madoka, Lord, if thou hadst been here, Sayaka had not transitioned. But I know, that even now, whatsoever thou wilt ask of God, God will give it thee. Madoka saith unto her, Sayaka shall rise again. Kyouko saith unto her, I know that she shall rise again in the resurrection at the last day.

Madoka said unto her, I am the resurrection, and the life: she that believeth in me, though she were a witch, yet shall she live: and whosoever liveth and believeth in me shall never transition. Believest thou this? She saith unto her, Yea, Lord: I believe that thou art the Kaname, the Daughter of God, which should come into the world.

Madoka therefore again groaning in herself cometh to the barrier. It was a maze, and a door lay upon it. Madoka said, Take ye away the door. Kyouko, the friend of her that was a witch, saith unto her, Lord, by this time she stinketh: for she hath been transitioned four days. Madoka saith unto her, Said I not unto thee, that, if thou wouldest believe, thou shouldest see the glory of God? Then they took away the door from the place where the witch was found. And Madoka lifted up her eyes, and said, Father, I thank thee that thou hast heard me.

But Sayaka still remained as a witch; and Madoka and Kyouko did enter the barrier of her. And Kyouko approached the witch, Sayaka, and saith unto her, Thou shall be made glorious; for she could not be returned. Then Kyouko tooketh with her the exalted into heaven; and Sayaka did follow as she repented her sins.

When the whole affair concludeth, Madoka’s companions did wonder why Sayaka could not been saveth. And Madoka said; she hath been taken over by lust and power; in whom the Inkyubeytor of this world hath blinded the minds of them which believe not, lest the light of the glorious gospel of Kaname, who is the image of God, should shine unto them. For we preach not ourselves, but Kaname Madoka the Lord; and ourselves your servants for Madoka’s sake. For God, who commanded the light to shine out of darkness, to give the light of the knowledge of the glory of God in the face of Kaname Madoka. 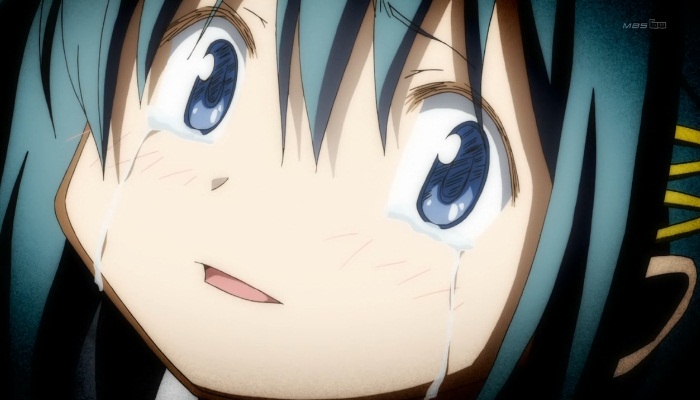 And said Madoka, How art thou fallen from heaven, O Incubator, son of mourning! How art thou cut down to the ground, which didst weaken the nations! For thou hast said in thine heart, I will transcend into spacetime, I will exalt my throne above the stars of God: I will sit also upon the mount of the congregation, in the sides of the north: I will ascend above the heights of the clouds; I will be like the most High. Yet thou shalt be brought down to hell, to the sides of the pit.

They that see thee shall narrowly look upon thee, and consider thee, saying, Is this the beast that made the earth to tremble, that did shake girls into witches; That made the world as a solution to entropy, and destroyed the emotions thereof; that spared not the energy of his prisoners?

When Madoka came into the festivals of Walpurgisnacht, she asked her companions, saying, Whom do men say that I the Daughter of man am?
And they said, Some say that thou art Haruna the Mahou Shoujo: some, Haruhi; and others, Suwako, or one of the gods.
She saith unto them, But whom say ye that I am?
And Akemi Homura answered and said, Thou art the Kaname, the Daughter of the living God.

And Madoka answered and said unto her, Blessed art thou, Homura Bar-Akemi: for flesh and blood hath not revealed it unto thee, but my Father which is out in spacetime.
And I say also unto thee, That thou art Homura, and upon this home I will build my church; and the gates of witchcraft shall not prevail against it.
And I will give unto thee the keys of the kingdom of space: and whatsoever thou shalt bind on earth shall be bound in time: and whatsoever thou shalt loose on earth shall be loosed in space.

And she bearing her cross went forth into a place called the place of a skull, which is called in the German Walpurgisnacht: where they crucified her. And Incubator wrote a title, and put it on the cross. And the writing was, MADOKA OF MITAKIHARA THE GREATEST WITCH. This title then read many of the magical girls; for the place where Madoka was crucified was nigh to the city: and it was written in German, and Japanese, and English. Then said Homura to Incubator, Write not, The Greatest Witch, but that she was the most strongest of magical girls.

Incubator answered, What I have written I have written. And Homura could not accept thy happenings, and vowed to saveth Madoka from such cruel fates. And many were stricken with fear, such as Mami of Sayaka’s town. When Homura had spoken these words, she went forth with Incubator over spacetime, where was a barrier, into the which she entered, and Madoka. And Kyouko also, and Sayaka, and Mami, knew the place: for Madoka ofttimes wandered thither with her companions. Walpurgis then, having received much power from Incubator, cometh thither with lanterns and torches and weapons. Homura therefore, knowing all things that should come upon her, went forth alone, and said unto it, Whom seek ye? 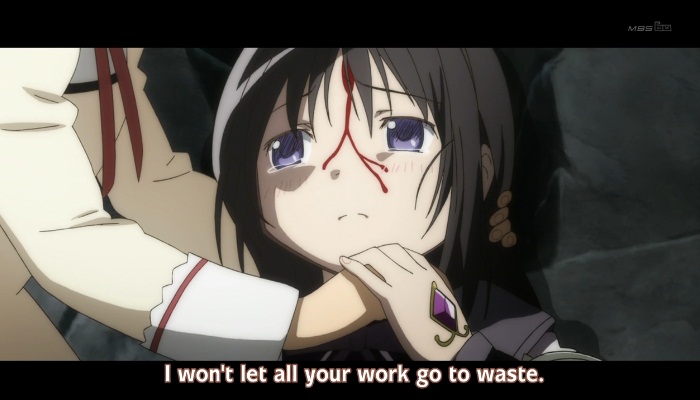 It answered her, Madoka of Mitakihara. Homura saith unto it, Thou shalt not reach her. As soon then as she had said unto it, thou shalt not reach her, it went backward, and fell to the ground. Then asked she it again, Whom seek ye? And it said, Madoka of Mitakihara. Homura answered, I have told you that thou shalt not touch her: if therefore ye seek her, let me face thou instead: Then Akemi Homura, having many arrows of explosion, drew them, and smote Walpurgis, and did bombard them many times. But repelled was she by the witch. Then said Madoka unto Homura, Rest, for thou art wounded: the cup which my Father hath given me, shall I not drink it?

And about the ninth hour Jesus cried with a loud voice, saying, Eli, Eli, lama sabachthani? that is to say, My God, my God, why hast thou forsaken me? Some of them that stood there, when they heard that, said, This girl calleth for Incubator. And straightway one of them ran, and took a bow, and made a quiver, and filled it with many arrows, and gave her. The rest said, Let be, let us see whether she will save us. Madoka, when he had cried again with a loud voice, yielded up the ghost.

And, behold, the veil of the festival was rent in twain from the top to the bottom; and the earth did quake, and the rocks rent; And the graves were opened; and many bodies of the girls which slept arose, And came out of the graves after his resurrection, and went into the holy city, and appeared unto many. Now when Incubator, and they that were with her, watching Madoka, saw the earthquake, and those things that were done, they feared greatly, saying, Truly this was the Daughter of God.

Incubator, having taken the body, wrapped it in a clean fabric of spacetime; and laid it in space and time, which God had hewn out from nothing: and he rolled the universe to the door of her grave, and departed.

In the end of the sabbath, as it began to dawn toward the first day of the week, came Akemi Homura and Incubator to see the present. And, behold, there was a great earthquake: for the angel of the Lord descended from heaven, and came and rolled back the past, the present, the future, and sat upon it. His countenance was like lightning, and his raiment white as snow: And for fear of him the keepers did shake, and became as dead men. And the angel answered and said unto the women, Fear not ye: for I know that ye seek Madoka, which was crucified. She is not here: for she is risen, as he said. Come, see the place where the Lord lay.

And Madoka came and spake unto them, saying, All power is given unto me in heaven and in earth. Go ye therefore, and teach all nations, baptizing them in the name of the Father, and of the Daughter, and of the Holy Ghost: Teaching them to observe all things whatsoever I have commanded you: and, lo, the way I am now, I am with you alway and everywhere, even though you cannot see nor hear me, even unto the end of the world.

DISCLAIMER: I am not Catholic, nor Christian; I do not read the Bible; anything here is not meant to offend if you are of the Christian faith. Please treat such as not an offensive piece of pagan ridicule but as a growing sentiment to the integrity of the Church in pervading much of modern society. Madoka is merely an anime about fluffy yuri girls.

This entry was posted on 2011/04/22 by Mushyrulez. It was filed under Animanga and was tagged with Animanga, Anime, Anime 2011 Winter, Anime Completed, Anime Half Season Review, Disclaimers, Images, Mahou Shoujo Madoka★Magica, Mushz, Rewrite History.