[Announcement/What: WHY THE HECK IS MY CALIBRI GONE AND THIS STUPID TIMES NEW ROMAN IN PLACE?! AND GUESS WHAT, I HAVE TO PAY TO EVEN CHANGE THE FUCKING FONT ON A TINY BLOG! Thanks a lot, WordPress.]

I would introduce the plot and summary around this point, but there’s nothing sane to introduce.

Instead, here’s a picture of an old man with a bulletproof vest attacking a deer with a reverse German suplex. 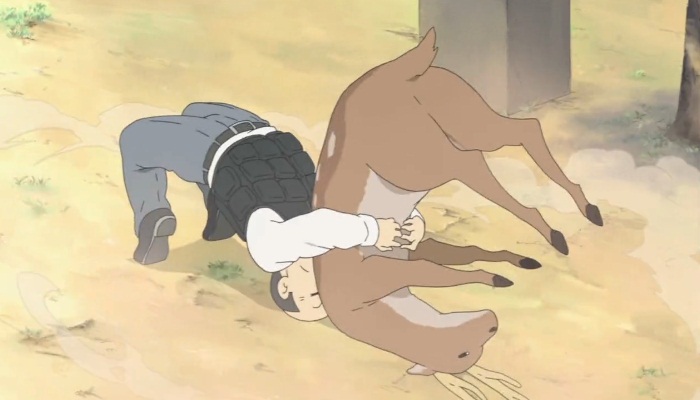 The story revolves around, you guessed it, the Everyday life (that’s a pun, alright?) of a talking cat from Trigun, a robot girl that stores roll cake in her arms, and her maker (who happens to be an eight-year-old girl with a penchant of winning Akutagawa Prizes), as well as a group of people from a high school who do silly things as well.

Their personalities and appearances are obviously different (as all slice of life shows have to be), which makes the entire thing horribly generic, but also largely entertaining and memorable.

Perhaps this fills one of the higher rungs on the slice of life ladder; for it really is a slice of life, a show about ordinary things happening to ordinary people.

Whereas for many other shows, this blatant lack of realism would produce some unfavourable words from me, nobody really cares about Nichijou’s unrealism. Why? Because it doesn’t matter. The primary focus of this show is as a comedy, and although the whole thing is very hit-and-miss (think Mitsudomoe, with less perversions and more spontaneity), I think that most people will enjoy this, enough to realize that comedy is the point of Nichijou, and nothing else really matters.

Of course, it’s not really all that ordinary, and a bit of fluffiness (a bad thing) rubs off on me from this show.

As many have pointed out, Nichijou seems to be focusing more on the cutesy aspects of the leads than true comedy. However, this probably will never be subverted (except by things like Hyouge Mono, which is a true masterpiece), so I have not much to complain about. Perhaps they should make everybody be fat, and have realistic faces, but… no.

Funny though, all of the jokes have nothing to do with the art’s pleasantness – they all deal with the characters’ personalities and other such quirks, not about their looks at all – in fact, having seemingly no focus on moe at all. That’s really strange, and I like it. 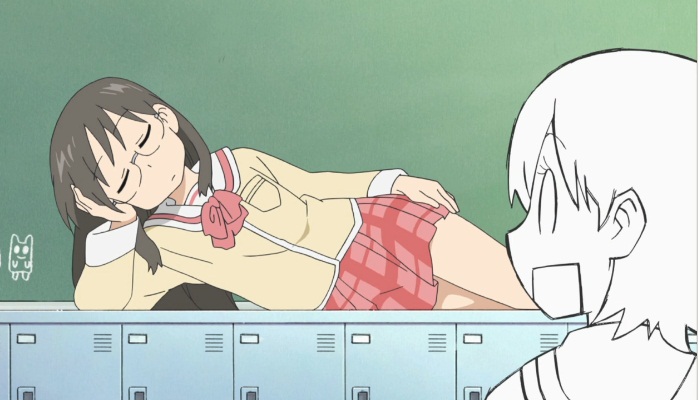 The comedy of Nichijou is not new, but it is different from, say, Level E’s carefully constructed endings. It’s very spur-of-the-moment and what-the-heck-just-happened based, so for people who like logic and disprove of laughter based on pointless happenings, this is not your show. Even so, I (though I disprove of non-logic) found much of the situations in this show hilarious, and seriously LOL’d my face off (of course, only when nobody was around) some times. However, other times, there was nothing more than a light chuckle, and others were genuinely boring misuses of time.

Yet, when appealing to the masses, I think Nichijou’s variety of absurd situations will have at least something to please everyone.

In some sense, this seems to be a rather romantic comedy-type anime, seeing as that’s a prevalent theme throughout. I suppose that’d still be ‘school slice of life’, seeing as all but the most unenlightened (don’t look at me) have some sort of love life, but eh.

Nichijou’s wonderfulness also partly stems from the viewer’s judgementality. That should be coined as a new word solely because it’s so catchy. How?

Remember those five READING POWERS that we had to learn in Grade 3 and had me banging my head against the wall in disapproval at the mere mention of the word ‘Connect’? Yeah, they were ‘Question (to ask), Connect (to find similarities between the book’s content and your life), Infer (to fill in gaps in the writing), Visualize (to see what you’re reading), and Transform (to… something)’. I guess there’s no real predict, but infer seems to be a valid substitution.

While you were watching this show (you were, right? RIGHT? If you weren’t, go away and take a dive down a well off the coast of Finland), you had to be attempting to predict what would happen next, right?

And of course, it didn’t work much of the time

Don’t call me an expert on comedy or anything (the only people who actually find me funny are stupid id-, er, ideologists, who excel at their work in ideologizing), but this aspect make the jokes stand out particularly well.

What’s more, it also encourages community participation as people talk (rather, tweet) about what they were expecting and didn’t get.

For example, I totally expected some of Mai’s acts, but some I guessed wrong; for example, that she would catch a fish comparable to the one caught in Angler Beats (get it? Angler? Ha, ha, ha ha… ha… I hate you all), or that she would draw something even cooler than what Yukko drew – though of course, cooler in the sense of more like Samidare George, which I must add actually does look super cool. 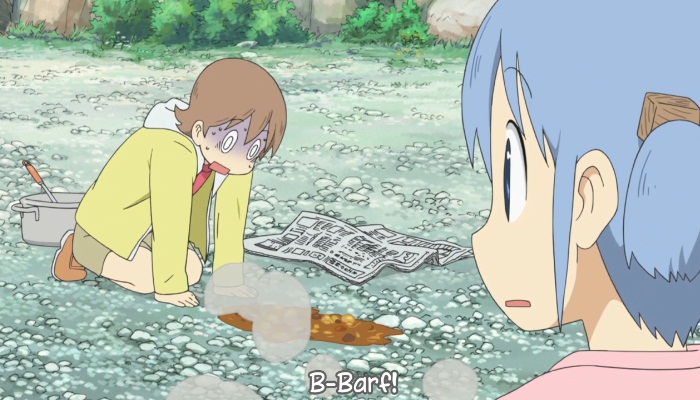 It also adds more room for community growth, when people make their own jokes. I can just imagine someone making a picture (yeah, right) of Nano’s newest function – combining the milk and roll cake she drank/ate into sponge cake for the professor. It’d make sense!

Of course, through everything, we have learned some very important concepts used in every day life, such as ‘Don’t wrestle deer’, ‘Don’t mistake your nsfw yaoi drawing folder for your socials homework’, ‘Always have alcohol with you’, and ‘Jazz music makes every manga 1000% cooler’. 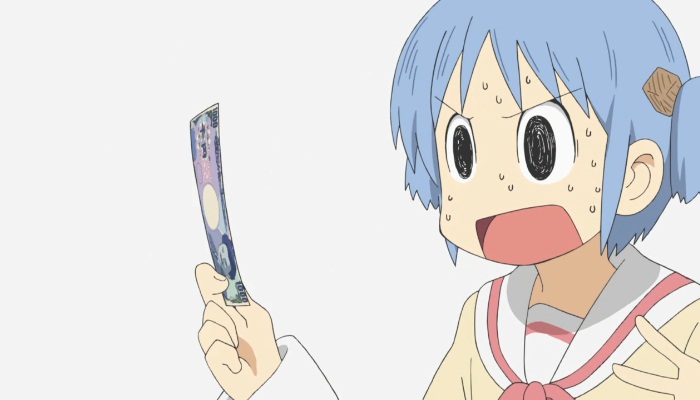 I do have some problems with this, though – because it’s a comedy show, you start to expect to be entertained, even when the joke sucks. It’s like, when you’re on chat, and somebody types a witty comment. You fire off a ‘lol’, even though irl you’re not even smiling at the comment. There are points in this show that are only funny because we think ‘hey, this part should be pretty funny. Why am I not laughing? I know, I’ll force myself to laugh. Hahaha.’ This totally downs the show, but there’s no real way to stop this, as everyone expects something, and even more when it’s a good show.

I marathoned this just today (sick from school due to there being too little dust in Canada), and I have to say, it is one of the most addicting anime I have ever watched. That’s still not saying much (when will it actually mean something?!): but (that colon at the end of the previous bracket/parenthesis was meant to be a sad face) it’s one of those shows that you wished never stopped.

Really, as a certain long-winded boring story would put it,

This is incredibly silly!

This entry was posted on 2011/05/19 by Mushyrulez. It was filed under Animanga and was tagged with Agnry Faic, Animanga, Anime, Anime 2011 Spring, Anime Half Season Review, I'm Actually Early?!, Images, Mushz, Nichijou, WordPress.