What’s happening to the space shuttle?

I guess it’s been…

Shit gets real this episode as I drink Dr. Pepper, the chosen drink of intellectuals. It just tastes like Cherry Coke, sorry. According to my not-very-intelligent brother, Dr. Pepper’s contract as an advertisement in-game was only for the Steins;Gate, well, game – being put in the anime was just a bonus, and holy crap what a bonus. It’s like Morning Rescue (which was probably all because of gg), Pocari Sweat (did anybody even /watch/ Level E?), or Pepsi NEXT (which isn’t even a drink, probably). These new forms of advertisement are pretty interesting in-anime – instead of ads separate from the show, they embed it in the show itself, without seeming like an advertisement. I mean, holy shit look at Tiger & Bunny – a show which was originally probably going to be about the ethics of advertising and corporate sponsorship happens to be ironically filled with sponsorship from real companies. Perhaps they were going to make it all ‘lol-sponsorships-are-bad’, but then the sponsors decided ‘no, they’re awesome, now make this into a stupid superhero show’. Notice how swiftly and suspiciously the whole moral thing was moved away with the introduction of Jake, and now suddenly even Mr. Maverick, who was originally that evil fat man who did sponsorships and such is a hero with his decisive thinking to save the city. There’s no more conflict between Tiger and Bunny’s personal ideals anymore, really, and now I’m going on and on and on, so here’s Daru eating pizza, which was probably sponsored by Pizza Hut because really, who the heck has raw bacon on their pizza.

Okarin tries to be the boy who leaps through time but Mayuri keeps on dying. He tries alternatives, including attacking Moeka with a water gun, but gets nothing more than vague statements about Zuckerburg (which my spellchecker recommends I change to ‘cocksucker’). Turns out even the terrorist bomb threat was part of SERN’s plan, but c’mon, do those people look like terrorists or what. After more deaths, Okarin decides to talk to Kurisu, and she warps him to just before she created the time leap machine, along with a codeword to confirm his successful leap-through-time.

They realize that everything that happens (every effect) must have something that made it happen (a cause). For Mayuri’s death to happen, it could be something as recent as Kurisu creating the time machine, or something as large as simply Mayuri’s birth. Before they can continue, Suzuha barges in and drops the bomb – she’s a time traveller from 2036, who also happens to be John Titor.

Actually, before she drops the bomb, she takes a plot-dump and reveals what my theory has been saying all alone/along – about world lines converging. Apparently, each world line is like a string entwined in a rope made out of many strings, entwined – though each one is separate, since they’re all bound together, they all reach the same ending (this analogy is a bit flawed because world lines start from one point (the big bang) and diverge into multiple lines). In World Line Alpha, Mayuri dies, no matter which world line you take. This sounds pretty stupid because if you take a different world line, it’s not going to still be World Line Alpha because it won’t be the same world line, so I’ll say in World Twine Alpha, Mayuri dies at the end, no matter which world line you take.

Rintarou in the future has developed a way to measure how different world lines are from each other, being the only person with the Reading Steiner ability. The Divergence Number measures the world line’s ‘location’, a concept which I don’t fully grasp (absolute position or relative position from last world line?), and if it ever passes 1%, the world line will move from World Twine Alpha and move into/create World Twine Beta, a world twine where vastly different things will happen compared to the end of World Twine Alpha.

I would say things to beef up my theory, but it’s not a theory anymore, so I’m dropping that. I only have one more note about these shenanigans – as long as the cycle of Rintarou-improves-time-machine-for-28-years -> Suzuha-goes-back-in-time-with-more-information-in-2036 -> Rintarou-receives-information-and-improves-time-machine-from-2036-in-2010-for-28-years -> Suzuha-goes-back-in-time-with-even-more-information-in-2036… continues, their information will become progressively better and better, allowing them to decisively defeat SERN at the end. However, wouldn’t SERN have done the same? 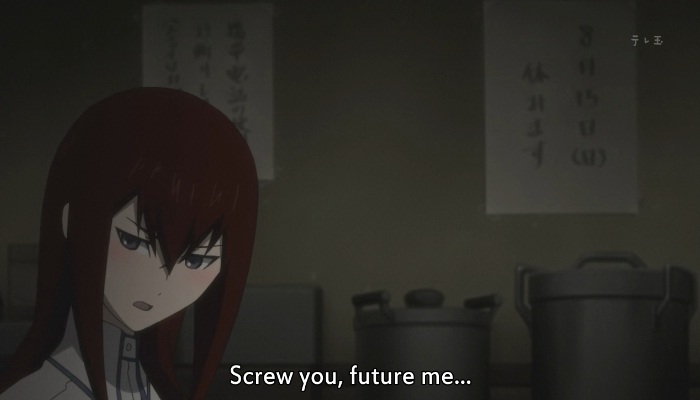 It’s nice to see that Rintarou is ultimately a very human… human – unlike other characters who are either decisively stupid, dimensionally one-sided, or ddddd-too perfect, Rintarou’s just.. human. For example, using the previous three characters, we’ll see what their actions will be like:

Mayuri dies. Decisively Stupid (DS) realizes this is totally bad and attacks Moeka with rage, dodging every bullet along the way. He succeeds and it is revealed that Moeka was SERN’s head, and now SERN is leaderless and self-destructs in agony.

Mayuri dies. Too perfect (D… er, TP) quickly grabs a gun and shoots Moeka in the head. Other SERN members barge up the door, but TP quickly leads the rest of the lab members through a secret door he prepared in advance and blow up the building (much to the dismay of Mr. Braun), killing many SERN operatives inside. They then engage in a secret sabotaging operation that renders all of SERN’s future experiments inoperable.

Mayuri decisively dies and DS warps back in time. He finds Mayuri and drives her to safety. Off a cliff.

Mayuri decisively dies and DO warps back in time. He stays with Mayuri the whole time, and when SERN attacks, he realizes that HE MUST USE HIS INNER PSYCHIC POWERS, manages to BEND A SPOON WITH HIS MIND, ABSORB SERN’S LASER BULLETS WITH HIS SPOON, and unleashes a powerful burst of psychic energy that kills them all, including himself. Mayuri survives and eats curry rice.

Mayuri decisively dies and TP warps back in time. He feels no emotional sympathy towards Mayuri’s death and quickly goes to Kurisu with news about SERN’s attack. They warp back in time two days and send a D-Mail back even more that tells past-Rintarou to accept Moeka into their lab, but not experiment with time travel in anyway. Back in the present, Rintarou finds that Moeka has left the group since all they did was experiment with vacuum cleaners, and they build their time machine in peace, announce it to the world, and suddenly everybody’s happy. 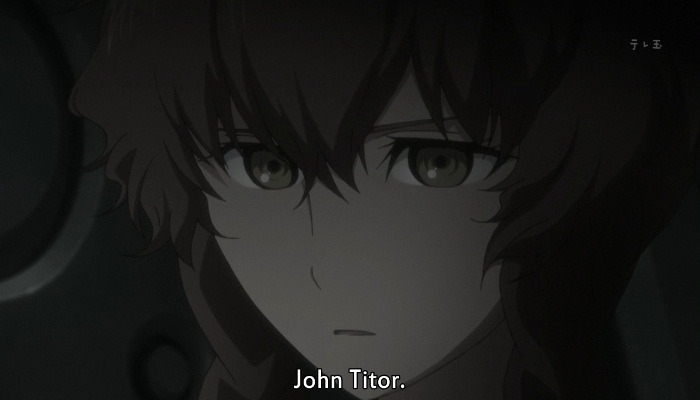 John Tit or what?

I still proclaim Rintarou as the most developed character I have ever seen in my… one year… of watching anime (of which I’ve seen a total of FOUR somewhat-developed characters, probably yeah sorta more like two). Even his wimpy crying doesn’t feel wimpy, it feels normal. It’s not out of place like certain other scenes *cough cough* AnoHana finale *cough cough*, and doesn’t try to make us sympathize with Rintarou and feel sad for Mayuri’s death. It just makes us realize the horror, stupidity, and hopelessness of their situation, which tells us much more about Rintarou’s character than simply us feeling sorry for them.

The visuals this episode were particularly well executed – not as in they were pretty, but they felt extremely well thought-out. Perhaps that’s what happens when you get a good plot and put in a bunch of vague pictures in between that seem to have some sort of philosophical meaning.

I was previously irked by how Rintarou somehow always managed to get to the time machine on time, until I realized that that was part of World Twine Alpha too – not only would Mayuri die, but Rintarou would always make it to the time machine after she dies. Perhaps the World Twine just stops there, because with Rintarou always going back in time, the world lines can’t advance any further, can they (yes, they can, because only Rintarou’s memories went back – Rintarou’s body didn’t, and that Rintarou will continue to do things that we don’t care about)?

This entry was posted on 2011/07/09 by Mushyrulez. It was filed under Animanga and was tagged with Animanga, Animated Frames, Anime 2011 Summer, Anime Post, Images, Mushz, Rewrite History, Steins;Gate.