A woman suddenly dies of ‘the Pandemic’ (which is now a Proper Noun consisting of ‘the’ and ‘Pandemic’ which must always be used together), and as the scientists carry her to do laboratory, another group of policeman herd together the witnesses for ‘some simple questions’…

Meanwhile, Safu writes a poem. I feel like it’s attempting to be modern, and convey a mood and whatnot, but my inability to understand the base language plus the dry and shallowness of the piece makes me scoff at it. I know I can’t write a better poem, but a poem like this doesn’t have enough meaning to be quoted /everywhere/ (literally, search for the poem’s lyrics on Google). What’s more hilarious is that the lyrics are in HorribleSubs’s translation (which is extremely, /extremely/ liberal this episode for some reason). I guess I’m assuming that Doki’s translation is different and that Japanese people aren’t quoting this poem everywhere, but man America, I laugh. I guess the postmodernist (tbh I don’t know the meaning of that word, but I use it so that I seem educated and intellectualized, and I guess I’m trying to mean minimalism (something stripped down to its basic parts), but in music minimalism is highly not-intellectualized, so I guess I mean some of the experimental music of John Cage and FUCK I MEMORIZED TOO MUCH INFORMATION GET OUT OF MY BRAIN STUPID MUSIC) approach is that poetry doesn’t need to be deep at all, and that it’s saying something deep by not being deep, but hey.

Shion (who I would spell Sion à la HorribleSubs but then I would get Shion and Astal mixed up) is teaching Karan and Rico, two moe children who shouldn’t matter but probably do matter, just as Youming will matter and Rikiga does matter. That’s right, Rikiga comes again to stir up trouble with the news of mysterious deaths across No. 6. Shion (whose tensions have cooled) relates to Rikiga his near-death’s story.

Shion tries to meet up with Nezumi, who is currently acting Hamlet under his stage persona, Eve. The stupid thing is that Nezumi is probably a ‘fake’ name too. Let’s not delve into what a name is yet – look at what happened to Google+. Eve is obviously a girl, and so Nezumi is acting as a girl. I wonder who actually believes that he’s a girl, as his voice has obviously cracked. This whole Nezumi-as-girl thing felt really awkward, especially as the scene changed from Nezumi to Safu to Nezumi to Safu to… yes, you’re trying to create a correlation between the two, we get it, let’s move on. A scarier thought is that Nezumi acting as a girl in a slum could take on a very grim turn – how did he kiss the prostitute so passionately back in that one episode? It could only mean one thing…

By the way, open the below image in a new tab, and then open this link in another tab. Now, quickly switch between the two, and look at the people on the street.

Interesting how they did this across two episodes, so that only a careful viewer could notice the similarity.

The different perspectives are absolutely gorgeous, too. The first image is a two-point perspective focusing on a corner, the second a one-point slanted perspective with the horizon out of view. Then, we have the third image, a one-point ‘vanishing’ picture, and the final images, which are merely foreground shots. I’m not an expert on art, but the tone No. 6 impresses upon us with its pastel greens, vibrant blacks, dazzling reds and sleepy blues is just amazing. I’d even call this art Impressionism, but it isn’t, because it still doesn’t evoke an emotion. No. 6 is ultimately an anime that tells a very physical story, a story that doesn’t extend into the emotional realm (emotional realm meaning real, ambiguous emotion – not the obvious drama of AnoHana or slapstick comedy of Azazel-san), and as such, its scenes can only be Romantic in nature. OH FUCK MUSIC GET OUT OF MY SYSTEM ALREADY GO AWAY

West District is also rather multicultural. What language are they speaking in? Japanese, as noted by Inukashi’s inn’s sign, Chinese, as displayed on the shop signs, or English, as one of the primarily languages on Earth? Safu’s tour of the museum brought an interesting note, though – England is no more. Was England the one destroyed? Was it America? The Soviet Union? Japan? Perhaps in this future, rule is under the No. Cities, and America was destroyed beyond hope in the nuclear war.

No. 5 is also multicultural, with the wide range of friends Safu’s got. I suppose a necessary question to ask is what language they speak in – perhaps the most likely is that they are speaking in No-ian, an artificial language. Or maybe just Japanese.

Back to plot: Nezumi and Safu both collapse, seemingly in the same dream about bees and blobs. I thought it would be what people experience before they age and die, but seeing as Shion didn’t experience that, it’s probably not likely. No. 6 is going beyond a mere science show, crossing the border of fantasy – or is Safu going to try to wedge an explanation for their shared dream? It might not be shared at all, and Safu thought ‘Nezumi’ only because of that rat Shion chased away on that day. Nezumi certainly didn’t think of Safu.

Safu returns to No. 6 due to her grandmother’s death, as the wheel of plot begins to click and turn.

The contrast/relation between No. 5 and West District are amazing, and the producers pounce on this, producing a truly brilliant segment, leading eventually to Safu and Nezumi’s mysterious shared dream. No. 5/6 don’t seem too 1984-ish – they encourage science and the arts. Yet, all these things about England not being here anymore either mean No. 6 is really far in the future/England was disbanded, or that No. 5/6 really ARE hiding the truth by *cough* rewriting history.

No. 6 is really creepy with the deaths (and the obviously suspicious government – I’ll bet all those witnesses ‘died due to unfortunate accidents’), and Nezumi’s gulping + shaking hands were a nice dramatic touch. This episode had me chilled at the implications everything seems to have – remember episode 1, when I was scared that No. 6 would have too much yaoi and not enough plot? Well, it seems to have more and more yaoi now (well, it’s already halfway through), but fuck if I’m not excited for No. 6 every week – this plot is downright brilliant.

Blogging this was my greatest anime decision of this season. 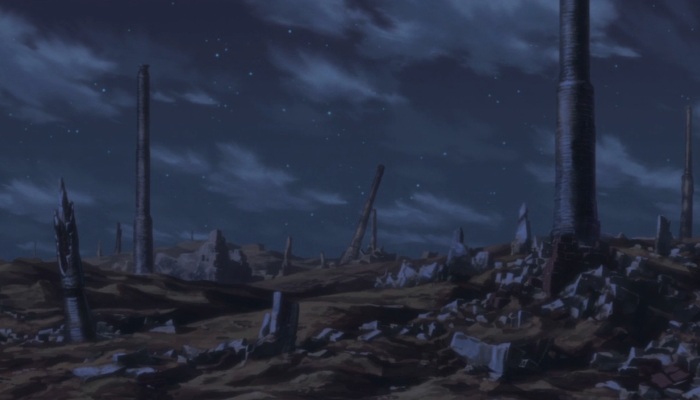 This entry was posted on 2011/08/08 by Mushyrulez. It was filed under Animanga and was tagged with Animanga, Anime, Anime 2011 Summer, Anime Post, Completely Unedited, I'm Actually Early?!, Images, Mushz, Music, No. 6.