Welp, here we are again, bothering you.

This month’s selections are much more interesting than last month’s (that’s not saying anything, really) – it’s funny how people even come up with these type of ideas. I hope they don’t suddenly get cancelled / stop getting scanlated / disappear without a trace…

The obligatory no-plot no-substance manga of this month. The oneshot and actual serialization chapters are completely different, though.

The basic premise is that Kaji Rikuo is just a normal kid living a normal life when SUDDENLY, a girl named Vanilla appears. Vanilla’s not actually a girl, but a… thing… created by Ibu Kiriko, who made her as an offensive weapon to KILL RIKUO for implying that she was a kindergartener one day like five years ago (she’s the same age as Rikuo, but extremely short).

It’s just one of those eyecandy manga – nothing to write home about. However, in art it’s nice and fluffy, so if it’s a lazy day and you don’t feel like thinking, this is the manga for you.

It’s funny though, how so many protagonists are getting more effeminate, compared to the SUPER STRONG SHOUNEN HEROES of the past. Protagonists are starting to cook, sew, clean, etc. – though female protagonists have hardly changed since the introduction of the tsundere trope >_>

Though, uh, I guess some people still need to improve on their cooking skills.

Mt. Kunlun is on top of Space Shaolin, a planet, where all martial arts in the universe were said to originate from. On top of Mt. Kunlun is Kunlun Headquarters, and seven kilometres down, Mei lives in a run-down dumpling shop.

One day, Liang, the world’s greatest inheritor of Space Martial Arts, comes in for a meal. He gets into a fight with Mei, and Mei kicks him in the face – an astonishing blow to the greatest fighter in the universe. To recover his dignity (everybody thinks he got kicked by an ordinary person), he resolves to train Mei into the universe’s second greatest fighter.

I like how the artist uses the swastika (and.. uh… Darth Vader and Death Star, I guess…) tastefully to mean eternity and the like. The Nazis’ use of it was just because of a passing fad, right…

Liang’s logic is extremely selfish – it’s also refreshing to see a protagonist who isn’t inhumanly pure or evil. Liang’s a normal person who wants to train Mei only for his own benefit – whether her becoming strong is to his own benefit or not.. well, we’ll find that out later on.

And here shit gets good.

Nowhere Boy is a manhwa by Jung Pil Won, that’s not even in MAL.

Yeah, guess what happens when you put a wish into the unhappiest person on Earth…

Anyways, in an attempt to save humanity without going back on his word, God decides that the Earth will end after 100 days – in that 100 days, Lee Hyun can only change his mind once (and subsequently save the Earth).

Meanwhile, Oh Duk Hee is the happiest person on Earth – she was the seventh happiest, but the rest all died or became unhappy. God decides to task her with changing Lee Hyun’s mind.

He (she?) gives her 12 apostles who will help her save the Earth, including the previous happiest person on Earth (she found out she was mentally ill), a magical girl, a vampire, a zombie, a plant-person, and… uh… yeah, you get it.

Nowhere Boy’s one of those hilarious self-aware manhwas that makes us realize how ridiculous things are. However, it’s actually pretty well crafted – the pacing is very nice, especially that one interview scene. It feels much more like an anime than a manga – the same can be said of Dr. Frost and many other manhwas.

The art is very nice too – maybe since this isn’t serialized, so the author can take a few liberties. Look at the background characters! It’d be nice if ‘regular’ manga had variances in art like that. And by background characters, I don’t mean font, because the editing was horrible.

I wonder if Oh Duk Hee is a representation of the mangaka (or manhwahwa, whatever)? Her ‘strategies’ are so stupid that I really hope the writer’s just doing this as satire. Really, sometimes we watch something like Bleach or Naruto and think ‘man, those abilities are cool and smart and cool’, and then we realize ‘HEY WAIT A MINUTE, THESE ARE FUCKING STUPID, WHY THE HELL WOULD THAT EVEN WORK’. Without things like Nowhere Boy shoving the latter into our faces, we might be much stupider than we are now (i.e. stupider than stupid).

Maybe God is a representation of the mangaka instead. The entire premise is so stupid and silly, but it’s a silliness we laugh at with the author, not at the author.

And now the final one.

I mean, it’s a manga composed of several short, unrelated stories – similar to Stardust Memories. WHICH WAS ALSO FUCKING SCARY

As such, I don’t think it’s going to develop a plot, but that’s alright – each of the stories are already FUCKING SCARY by themselves. Yet, they also each teach an important lesson, an important lesson to grade schoolers (don’t take your mother for granted, finish all your food, don’t keep everything to yourself). However, where normal parables usually have a character do something bad, realize he’s done something bad, admit to his wrongdoings, stop doing bad things, and end with everybody being happy, Zekkyou Gakkyuu has the heroine do something bad, realize she’s done something bad, admit to her wrongdoings, stop doing bad things, and END WITH HER GETTING MURDERED FOR DOING SOMETHING BAD IN THE FIRST PLACE. It’s not a fan of forgiving, apparently.

The cutesy art contrasts FUCKING SCARILY with the FUCKING SCARY, producing a truly FUCKING SCARY work. Yet, it’s surprisingly morally right – the FUCKING SCARY main character would be a perfect goody-two shoes if she were a real girl (and not that FUCKING SCARY). Oh well, if Zekkyou Gakkyuu continues to be so FUCKING SCARY and yet teach these moral lessons (the storytelling is especially nice, how they wrap up an entire story in one chapter), it’s going to be one of the best manga I’ve ever read.

In conclusion, I really really don’t hope these just suddenly end like so many have.

tl;dr: what was that octopus in Oreimo anyways? 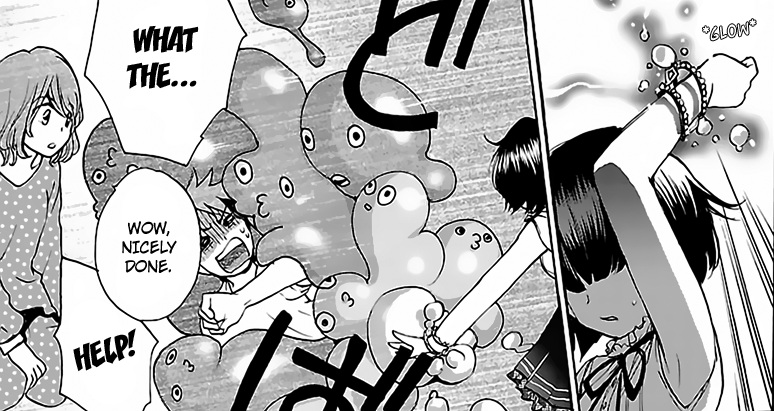