No. 6 is ultimately more about emotions and human behaviour than plot.

“I never knew it would actually taste the same as apple juice!”

Inukashi gets information about Safu’s location, leading Shion and Nezumi to infiltrate the facility. Youming and Karan investigate No. 6.

How did Shion learn how to bake pie? Where does he have the time to learn such a thing? Assuming that he didn’t have time to learn how to bake pie when he was busy studying ecology, he must have learned how to bake pie after he and Karan moved to a middle-class home, by which time he was busy doing his job, presumably to earn money. If so, why didn’t he just work harder to earn more money to live in a high-class home? That said, if No. 6 is so cool and awesome and good, why isn’t it communist? Actually, is it communist? It’s entirely possible that it is, but if it was, bakeries would be rather pointless, and didn’t we see Youming pay Karan when he bought that muffin in Episode 2? Man, maybe No. 6 is a capitalist ‘utopia’ and No. 7 is the communist one.

It makes complete sense that No. 6 would be an entire experiment. People would then be taken out of it, randomly – not only dissenters, but also regular people, who would be studied by government official scientists to prove the effects of utopic communism on people or something. In the future, this isn’t unlikely – maybe it’s 2601 already, and the people who live in No. 6 are low-class humans who don’t live in space. Either that, or volunteers for the project who brought their children up specifically without telling them that it was all an experiment. Though, I wonder why the heck they’d release those bees if it’s an experiment – maybe they’ve collected all the data about a peaceful city, and now want to learn more about mob psychology in a panicked state?

In a completely different topic, Inukashi. Why do her dogs even obey Inukashi? Since they were all raised by the same parents, and Inukashi even admits that one of them was her uncle, why do they listen to what she says and not have her listen to what they say? Inukashi definitely would’ve learned to speak dog as a child – yet, her Japanese is impeccable. Shouldn’t her vocal chords be foreign to human sounds if she had no human contact as a child? The only thing she would know how to speak is dog. Yet, instead of delving into this interesting character’s interesting past, No. 6 almost completely avoids the topic…

Almost completely because no doubt, her past will come back in a later episode. She’s irrationally afraid of death, so afraid that she was unabashedly hypocritical last episode – a flaw that Nezumi spotted and capitalized on. Perhaps Inukashi was physically tortured as a child, causing her to experience first-hand the horror of a painful death?

As I said, No. 6 is ultimately about being human – and No. 6 completely understands the frailty, the senselessness, the contradictions of human life. 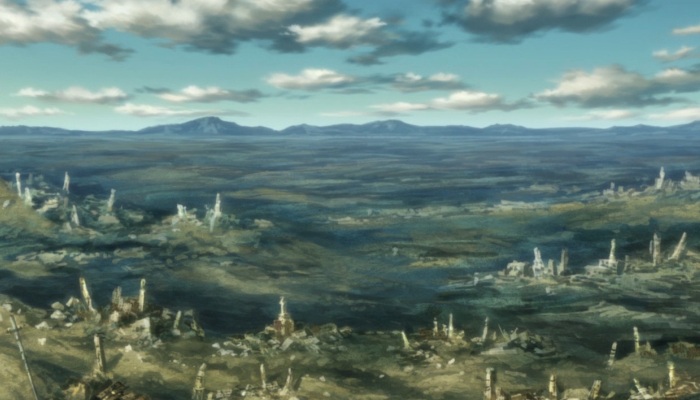 A few questions and comments about No. 6:

How did the security officer know that her name was Safu if she wasn’t even in the database? What’s her last name, anyways – or do people not even have last names in No. 6?

How did Inukashi get the information from inside No. 6? I mean, isn’t there a huge, literal wall separating No. 6 from the West District? It seemed like the information took mere days to collect, but it must have taken weeks, even months… right?

The woman who talked to Karan – some people say she’s the same person who talked to Safu, and others say that the one who talked to Safu was just passing through. I mean, how would No. 6 know of every person who might possibly dissent? Unless the chips hidden inside everybody (remember, this was said at the beginning of the show) also monitor brain movements, which increase during times of anxiety and unrest, blah blah blah science and tl;dr if No. 6 is an experiment, then it’d be easy to find dissenters. Perhaps the ultimate meaning behind it (if it were an experiment) would be to prove some person’s thesis that in any closed group of people, even if the majority are happy, a minority will always revolt, and a revolution will always happen in any given society over a long enough period of time. That would be such a ‘You dun trolled!’ ending, while I sit here knowing that I predicted the result. Yet, light novel readers ultimately know more than I :(

Are the rats robots or not? Why would Nezumi train non-robotic rats, or keep them, simply because he’s a ‘rat’ himself? Inukashi raises dogs because (in Soviet Russia) dogs raised her, but Nezumi owes nothing to rats. He shows that one of them is obviously robotic because of the projector, and three more are obviously not, as they eat – but is that just a program, programmed into the robotic rats? Or are those real rats with genetic modifications? Either way, they’re too complicated for Nezumi to make alone – those rats are mighty suspicious critters.

Finally, as Elyon said at Sekijitsu, it makes no sense that Safu’s clothes would’ve been unique – any other coat could’ve looked the same, and Shion can’t fully trust his memory now that he’s gone berserk (even though we know that it’s the same coat, we don’t know that he is completely certain it is). The most logical answer (which is rather illogical) is easy to find – that is, once you realize that No. 6 is an anime about emotions, Shion was driven by fear of Safu’s safety that it must have been Safu’s clothes. He still doesn’t know Safu’s gone to No. 6 to find him, there’s no way Safu’s clothes would be in No. 6, yet he firmly believes that they are Safu’s clothes due to a subconscious gravitation towards the worst possible scenario. Him getting it right that they were actually Safu’s was most likely a coincidence.

No. 6 is, at its core, a very impulsive story – fuelled by human impulse. Its emotional drama is much more realistic than the (I admit) very fake AnoHana – yet, having not experienced drama, I can’t say whether one’s fake or another’s real. Perhaps they’re merely different forms of drama.

Drama in its purest form

Every incident and character seems to matter, seems to be absolutely crucial to the story moving forward, just like Steins;Gate – and just like Steins;Gate, even though No. 6 is moving as fast as it can, the story is still too slow – No. 6 just can’t move that fast. It’s not about the plot, it’s about emotions – I wouldn’t be surprised if it didn’t end with a conclusive defeat of No. 6.

In fact, since the yaoi is now on the roll, is it going to end with just Nezumi and Shion living happily in West District, looking on as the citizens of No. 6 die in panic? Or end with a deus ex machina – literally – as the ‘Gods’ of the experiment (namely, the scientists) descend down and put an end to the madness? The bees still stay as a big antagonist, but the largest antagonist is No. 6 itself – there’s no way a party of six people can defeat an entire city-state, much less turn its ideals upside-down…

That said, what is wrong about No. 6? It’s perfect, isn’t it? The only thing that’s wrong is the lack of dissenters. Yet, an utopia can be perfect even if the dissenters are removed (a small sacrifice for the happiness of the entire population), or an utopia can also be perfect with a lot of dissenters highlighting the utopia’s imperfection. That sounds contradictory, but that sort of utopia will keep on improving as long as it can find its own flaws and change them – which is as utopic as an utopia can get, right? It’s the difference between, say, China, which exerts something like a cultural mind-control over its citizens proclaiming how China’s awesome and cool (while in reality, it isn’t all that awesome and cool), and America, whose citizens feel obligated to point out its every flaw because of free speech, and so everybody thinks America is stupid and sucks (while in reality, it isn’t all that stupid and sucky). None of the methods are necessarily ‘better’ – though an American may think the American method is better (alternatively, they might think the Chinese method is better since grass is greener etc.), a Chinese may think the Chinese method is better (and grass is greener so maybe they’ll think American method is better). Each of the methods have gradually evolved from time – the methods far in the future will eventually be the ‘best’ methods of the time. China needs to feel really cool and strong to continue improving (which it’s doing in leaps and bounds), and America needs to address its own flaws, however minute, before it can improve even more (since it’s already reached a sort of ‘cap’). To conclude this long paragraph, back to No. 6 – if Shion really wanted it to be perfect, all that’s necessary is to depose the government that silences dissenters – that’s all. No complicated things. The bees are still a problem, but that comes later. Yet, a brilliant ending will be if Shion finds out that his own opinions aren’t always the best – maybe people will start to riot, and eventually many, many, many more innocent people are killed with this newfound knowledge than would’ve been killed if the dissenters were merely silenced.

I feel like there’s not enough time left, as the ending starts getting worse and worse – there’s only four episodes left to solve the mystery, and the mystery hasn’t even been introduced, yet!

The age of the new noitaminA.

This entry was posted on 2011/08/23 by Mushyrulez. It was filed under Animanga and was tagged with Animanga, Anime, Anime Post, Completely Unedited, Fractale, Images, Links, Mushz, No. 6, noitaminA, Rewrite History.