So, I’m going on vacation to some vacation-place for the next three days. Thus, all the posts in the next three days have already been written in advance, and they’re only of anime that’s already aired as of today – after all, I CAN’T WATCH ANIME BEFORE IT AIRS SORRY 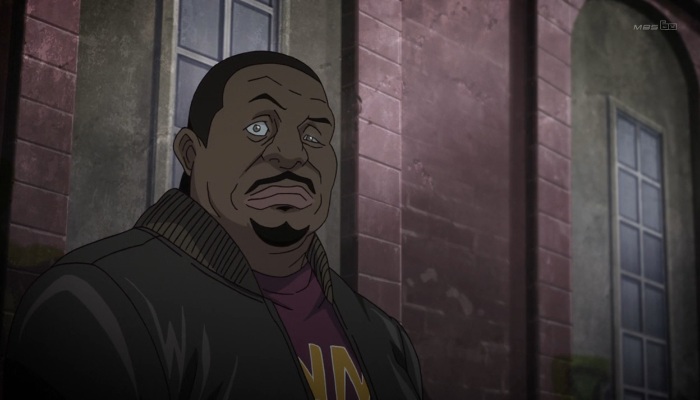 I’M NOT EVEN GOING TO SAY ANY PLOT BECAUSE TIGER & BUNNY IS FUCKING AWESOME AND YOU SHOULD WATCH IT AND I’M MORE EXCITED FOR TIGER & BUNNY THAN STEINS;GATE NOW

IT’S SO WOWWWW I’M NOT GOING TO EDIT THE IMAGES LIKE A LOSER STEINS;GATER BECAUSE WOOOWWWW YEAH

I was thinking that the public would still know that Kotetsu was Wild Tiger, but… lol, I guess that’s what happens when you keep your identity secret. The public probably thinks that Kotetsu is some insane Wild Tiger fanboy who cut his hair just like Tiger and happen to have the same abilities.

I don’t get how Maverick’s mind control works – does he have to think up images to put into their head, or just modify their memories? Can he see their memories? I mean, he managed to make Barnaby think that he went with him to take that photo, etc., but it was actually Samantha who took the photo with Barnaby. Yet, the photo in Barnaby’s memory with Maverick is exactly the same (without Maverick) as the one he took in real life with Samantha – yet, Maverick didn’t know what Barnaby and Samantha did that day, right? Likewise, he couldn’t have known of the towel Kotetsu gave Blue Rose, etc.

The first possible scenario is that he can see the person’s memory, and then alter them – that would take a shit ton of time, though. Besides, if he could see their memories and alter them, wouldn’t he know of the pin that Barnaby bought with Kotetsu? It’s a bit stupid that they show that pin in the first ED but not the second one, when it wasn’t even introduced in the first cour… it’s a bit obvious that that pin will be the thing to spark Barnaby’s memories back.

The second possible scenario is that he can only alter the people in their memory, and can completely swap one person with another person, without actually knowing what happened. That would make a lot more sense, as the switches would be quick, and he also wouldn’t actually know what anybody’s thinking.

Yet, thinking about how Maverick can control minds is like thinking about how Kotetsu can become 100 times stronger, or how Blue Rose can freeze everything around her without getting cold. I was going to talk about how NEXT abilities are so convenient (becoming 100 times stronger, freezing stuff) instead of less heroic things like being able to taste 1000 different flavours, or being able to manipulate the colours of grass, but then I realized the abilities of the people at HERO Academy are pretty useless. Only the people without useless abilities can become televised heroes, right?

Seems like the OP is wrong, with Barnaby and Kotetsu kicking Lunatic together. It’s nice to see the show doesn’t paint Lunatic as a completely wrong person who doesn’t give people a chance – he sees through fake criminals and real ones. After all, he’s a judge, right? He has the most right to judge people, since he knows all of the stupid, immoral exceptions in the law (not saying that the law is stupid or immoral, just that sometimes, it defies common sense). Yet, he’ll probably die fighting the fake Wild Tiger – I seriously wonder who that is. Not the creeper who dressed up as Blue Rose, right. Maybe it’s a special super robot constructed by Barnaby’s parents, and the real reason they died was because they didn’t let Maverick use that robot because it was SO SUPER?

It is really funny how the heroes seem so stupid when they try to capture Kotetsu – yet, it’s perfectly logical, right? You have this person whose fingerprints were on the fire poker of somebody who was just murdered, and now he’s running away from everybody. He’s obviously a criminal. We might have sympathy for Kotetsu since we know that he was framed, but think about some other wrongly judged criminal.

You’re just a normal person one day, when suddenly, heroes burst into your home and tell you you’re under arrest. Of course, you have no idea what’s happening so you try to run away, and the heroes break all of your furniture in the process of trying to catch you. Suddenly, a huge gust of wind catches you and you’re thrown several metres in the air. You fall down, and several of your bones crack – you hear your leg bend in a sickening direction, and everything goes black. When you come to, you find out that you were wrongly arrested – you suffered all that pain for nothing. Perhaps this has already happened to some suspects in Tiger & Bunny. We didn’t notice that something like this would happen until now. The heroes are less heroic than Lunatic, who was often portrayed as an anti-hero – now, the heroes are the anti-heroes. Crime isn’t always black and white – actually, it’s never black and white!

Maybe you think that this is a bad comparison, since most criminals are normal people, and Kotetsu is a NEXT. Yet, he almost never activated his Hundred Power through so many chases – it was basically a normal person against SEVEN SUPERHEROES. And that’s what makes it exciting – there’s a lot of action, and there’s no clear winner. Kotetsu might just die for nothing in some twisted ending.

Apparently, the Drama CD talks about Kotetsu and Rock Bison’s past, when they were together in school or something. I haven’t listened to it, so I’m not sure. I don’t get how Rock Bison doesn’t even realize that – who did Maverick replace Kotetsu with? Blue Rose talks about how nobody knows Wild Tiger’s true identity, but Rock Bison obviously knew Kotetsu from before he became Wild Tiger…

There are only two last things to say – not even Maverick knows who Kotetsu’s daughter is? Will Barnaby recognize Kotetsu’s daughter from that time he saved her from the ice skating rink? And Ouroboros – there are only four episodes left. Will they be the ones to unite Kotetsu and the Heroes in some sort of ‘common enemy’ alliance? That’ll be such a cop-out – I’d much rather they solve their problems through straight means.

I WANT TO WATCH THE NEXT EPISODE RIGHT NOW

But I can’t because I’m on vacation :(

This entry was posted on 2011/08/27 by Mushyrulez. It was filed under Animanga and was tagged with Animanga, Anime, Anime 2011 Summer, Anime Post, Completely Unedited, I'm Actually Early?!, Images, Mushz, Tiger & Bunny, Vacation.