So derp derp, I’ll conclude this series with my trademark lets-spew-random-unimportant-shit-on-the-computer-cause-I-can.

Using the ED at the beginning didn’t make Kotetsu’s ‘death’ heartbreaking or emotional at all. I wonder if that was a horrible design flaw or used on purpose? The ED set the mood for the entire show – it’s not a sad show, it’s a vibrant, SUPERHERO show. Really, I knew Kotetsu wouldn’t die just because they put the ED in that place.

However, it might have been nicer if it actually did create a sadder mood. The entire scene felt entirely out of place – it’s like going to a funeral and finding out that everybody’s partying to pop music, or going to a party and finding that everybody’s sitting down with solemn faces listening to an organ solo over the voice of a dispassionate pastor. Yes, these kinds of stuff may lead to creative situations, but I really didn’t expect Sunrise of all studios to do that.

Once again, the OP should’ve really been scrapped this episode. The two episodes could have led right into each other, but instead, they have this OP that comes in from the middle of nowhere breaking everything up. Not only that, but if they wanted to use the ED to infuse energy, why did they suddenly cut it off from the middle of nowhere as well?! Between Ao no Exorcist and Tiger & Bunny, I can’t tell which one had the worst entrance into an opening this year.

Of course there would be multiple H-01s… but if they had H-01’s pistols and lightsabres, wouldn’t they easily win? I mean, why doesn’t the city just let them equip those pistols and lightsabres? The only way the H-01s are better than the heroes is in their durability. That’s all. It’s not like normal people can harm Heroes, anyways… 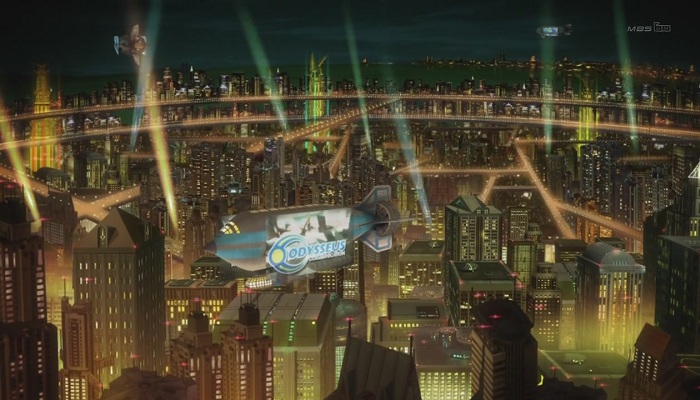 That ending was actually PRETTY AWESOME – not when Tiger came back from the dead, but when EVERYBODY WORKED TOGETHER to defeat the EVIL MAVERICK. I especially loved how Saito and Agnes were involved – they’re not useless at all, and they’re actually pretty smart. I did not expect an ending like that at all (I expected it more to be ‘BECAUSE WE ARE JUSTICE now die Maverick’), and their execution was similarly brilliant. It’s the little things that matter, and Tiger & Bunny makes it clear from the beginning of this arc that everything matters.

One Year Later was also a nice move, to see everyday life after a huge crisis. It concluded everybody’s character development episodes, besides Fire Emblem and Rock Bison cause they’re not cool enough to get a special development episode.

Now, a few closing points I’d like to make.

For one, the magnetism man was never revealed. NEVER. This is obviously going to be used as part of the plot for the second season. Secondly, although their phones (their phones, for god’s sake!) show a holographic visual display when called, they still use TVs from the 1970s… seriously, I swear they had a 50 inch television in one episode, why is their TV so small now?

Thirdly, the music this episode was just continuous the whole time. I just can’t wait for the OST – compared to anime like HotD (whose music I cannot remember at all), I can clearly remember at least five tracks from Tiger & Bunny, and they’re all very Tiger & Bunnyish. Fourthly, the yaoi in Tiger & Bunny is nice, but not rushed – compared to No. 6’s, which only had 11 episodes and ended rather sadly (sad as in ‘wow, what the heck happened’). The ending does show how their relationship has progressed, but doesn’t rush into anything at all – confidently setting the scene for the second season (which has already been announced?)

Finally, the use of the first ED at the very end was very nostalgic, as was the montage of scenes from each hero. It felt like the end of a movie – albeit an eight-hour-long one.

In conclusion, Tiger & Bunny was a really entertaining ride. Its plot was brilliant and I loved every moment of the show. However – that’s all it was, the plot. None of the multiple plot threads were further explored, there were many holes throughout the entire show, and the original concept was completely tossed out for a superhero anime like any other superhero anime. So, while I enjoyed it, it definitely wasn’t a masterpiece, and wasn’t that brilliant either.

P.S. Ouroboros is so elitist, they put their symbol on every bill, a symbol that could easily be seen by anybody by simply making the bill wet… so when Barnaby went all over the place talking about Ouroboros, and all those Ouroboros cards fell from the air during Jake’s reign… nobody noticed? It’s probably a coincidence that their symbol was ‘on’ the bill – maybe it was just a strange pattern of water markings :|

This entry was posted on 2011/09/19 by Mushyrulez. It was filed under Animanga and was tagged with Animanga, Anime, Anime 2011 Summer, Anime Completed, Anime Post, Completely Unedited, Images, Links, Mushz, No. 6, Rewrite History, Sunrise, Tiger & Bunny.