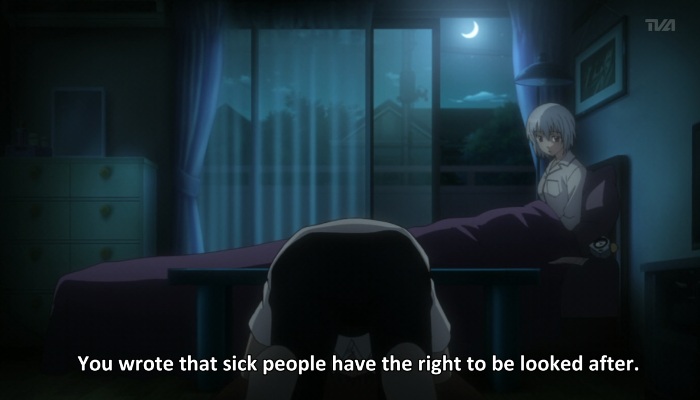 “So who’s looking after you, You?”

I was just chillin’ around with my bro,
Took the whole day and so there’s no post,
It may not be on time,
But at least it has rhymes,
A nice end to this ridiculous show.
But now it’s over, the end of Ben-To.

This is lame teenage protagonist done RIGHT,
Look, You can at least decently pull a FIGHT,
While Shu’s intentionally a fat BLIGHT,
You’s not a shoe, so he’s ALRIGHT.

You could even say You’s a pretty nice GUY,
Punching little girls in the face and the EYES,
All because he’s just trying to BUY,
Some half-priced food with some money that he doesn’t have because he doesn’t get a JOB.

In other anime, while the heroine’s SICK,
The protagonist would go and be a DICK,
But in Ben-To, You goes to KICK,
The half-priced food out of helpless CHICKS.

Actually, that’s still a pretty dick MOVE,
But You just has something big to PROVE,
That he can get that half-priced lunch and always IMPROVE,
Except in the area of actually, y’know, finding a job and getting enough money to actually buy full-priced food instead of wasting your time fighting with these random strangers all the time and punching girls in the face. Don’t be an asshole.

The thing about Ben-To’s direction,
Is that it never seems to change.
Each episode has no discretion,
It’s always the same, same, same.

Someone first receives information,
But we do not know what it is.
Only at the middle the narration,
Slowly dissipates the mist.

Orthros are the bad bunch,
They have money for lunch,
They don’t need the food crunch,
All they want is to punch.

The others don’t have money,
You think fighting is funny?
You think it’d be fun to be
Kicked till you have a cracked knee?
You sure thinks so. That’s why his name is Satou. Get it? Sat? Ou? No, I don’t get it either. Do something productive. Get a job, eat potato chips, kick girls in the face. Just stop reading already gosh.

tl;dr: Creators of Ben-To saying that world peace is evil, communism can’t work, and survival-of-the-fittest capitalism is the only way

EXCEPT THEY’RE BEING IRONIC, which is what they were being from the START to the HEART it’s even shown in its ART think you’re SMART well here’s a CHART of how IRONIC Ben-To was:

P.S.S. I think they should get jobs… I probably shouldn’t speak.

This entry was posted on 2011/12/27 by Mushyrulez. It was filed under Animanga and was tagged with Animanga, Anime, Anime 2011 Fall, Anime Completed, Anime Post, Ben-To, Completely Unedited, Images, It's TIME to RHYME, Mushz, Rewrite History.