IS THIS A TOUHOU ANIME POST I SEE IN O-NEW 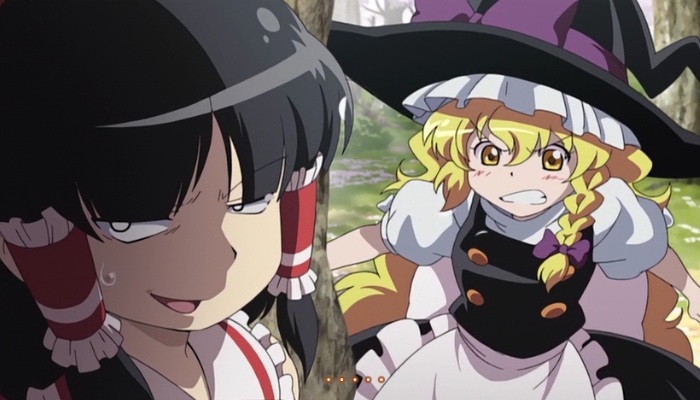 even though only five characters actually matter

The first is an Anime Tenchou x Touhou Project, produced professionally by ufotable. By professionally, I mean that ufotable is a professional studio, that is, a studio that earns money. By professionally, I don’t mean that ufotable earns money from this project. If they did somehow earn money from this, I would be mighty suspicious, seeing as the only people who watched this attended a free live showing a year ago. I guess ufotable burned all copies of the anime or something, because they’re not releasing it on any format, and we have no proof that the anime still exists anymore. So, even though Anime Tenchou x Touhou Project existed professionally in the first place, it may not exist in the second place, and the third place is still full of homeless perverts. That was a joke. I deserve a rimshot.

The second is ‘Touhou Niji Sousaku Doujin Anime: Musou Kakyou’ (‘Touhou Unofficial Doujin Anime: A Summer Day’s Dream’), produced amateurishly by MAIKAZE. Or maybe professionally. I’m not sure. I think I watched this once, but it was incomplete, because apparently they hired the big stars (I mean, the BIG stars) to provide the voices for it, and probably ran out of money after the first episode. So, even though A Summer Day’s Dream existed amateurishly or professionally in the first place, it, uh, just stops after the first episode. ‘That’s not a big deal,’ you’d say, ‘Doesn’t Anime Tenchou x Touhou Project also only have one episode?’

I didn’t even know that the third one existed until flare told me so in the comments of this post. It’s known as Touhou Project Side Story ~ Memory of Stars, and, uh, that’s a link to let you watch it for free, legally, and freegally online on YouTube. I haven’t seen it before. I haven’t even heard about it before. I didn’t even know this existed before. But I guess it does and to be honest it looks pretty crappy. Sorry, flare.

Finally, the fourth one. It is called ‘Touhou Gensou Mangekyou ~the Memories of Phantasm~’, or so I think, because MAL doesn’t have an official entry on it. One reason that I’m blogging this is that it has more tildes than Touhou Project Side Story ~ Memory of Stars. There’s two tildes in Touhou Gensou Mangekyou ~the Memories of Phantasm~! Count them! One… two. Similarly, there are two more, better reasons I’m blogging this instead of the other two. (I think they’re good, more, and better reasons.) 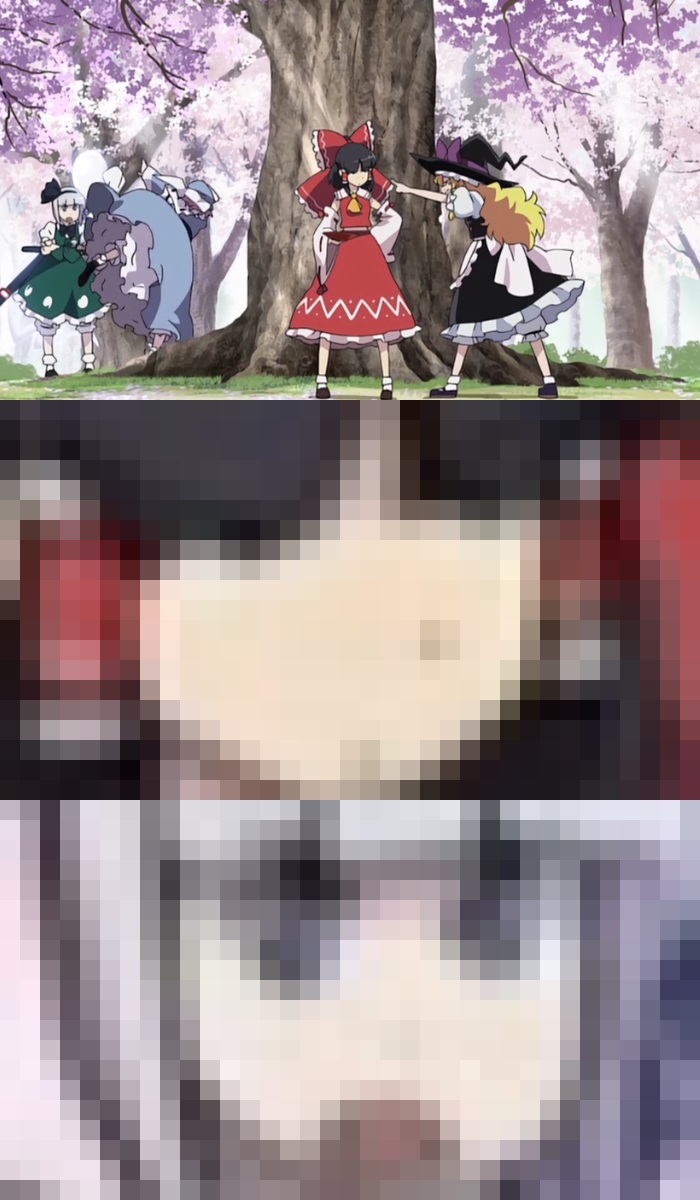 Yes, I see you’re shocked, but here they are:

1. Touhou Niji Sousaku Doujin Anime: Musou Kakyou is confusing in the first place.
2. Anime Tenchou x Touhou Project may not exist in the second place.
3. Homeless perverts still live in the third place.
4. Don’t even think about going to the fourth place. /I/ don’t even know what’s in the fourth place.
5. Touhou Project Side Story ~ Memory of Stars places fifth. Sorry.

Well, those were five reasons. But, as they say, ‘When Jack eats a dill, then Jack’s a good boy.’

6. Touhou Gensou Mangekyou may exist in the second place.

I only found this out today when I was writing this post, expecting this to only be one-episode long, but I guess not. I think that that animation was good (No, not the naked girls part. That part sucked. Admit it). However, that’s the best animation you’re going to get from Touhou Gensou Mangekyou. Really. I’ll bet they spent half their time working on the OP.

The entire episode is only 16 minutes long, and the OP takes what seventeen minutes from that. At first, since the OP had Mountain of Faith music and all that, I thought it was about Mountain of Faith, but it turned out to be about the Embodiment of Scarlet Devil. The OP, that is, because the story’s about Perfect Cherry Blossom. Confusing? Yeah, I thought not. Basically, the OP has nothing to do with the actual episode. So I’m guessing Episode 2 is going to be about Undefined Fantastic Object or something.

Which makes no sense. Why would you make an OP that’s not even about the episode? Maybe they’re trying to catch up to ZUN, and eventually produce an episode or an OP of every single Touhou game. Which might soon happen, until ZUN starts spewing out TH13.3s, TH13.5s, and then TH13.51s, TH13.52s, TH13.53s, and on and on and on, spending a grand total of two days developing each game. Tough luck keeping up with that. But at least they have good taste in music, using the best themes from Mountain of Faith and Subterranean Animism for the OPs.

I’ve realized that until now, this anime post is not actually about what the title of this anime post says it’s about. But no worries, we shall now continue to the subject of the show itself:

ZUN being drunk. And high. Simultaneously.

That’s what he sees when he develops Touhou. This was originally going to be funnier, but I realized that a .gif of moving shrines just doesn’t cut it when it comes to cut funniness. When you say that somebody’s cute, all you mean is that she can cut funniness. Cutting funniness is not necessarily a good thing.

Yes, this anime has no voices. All the words are subtitled on the screen. It’s like watching anime deaf! Which isn’t as weird as watching anime blind, but…

Thankfully, there are three fandubs dubbed by fans who dub fandubs.

The first one is a MANDUB. I watched (listened) to the MANDUB expecting MANLY MEN and MANLY DUBS, but instead, I just one normal man (not many normal men, nor meny normal man) and one normal dub. The quality also sucked. There was static all over the place, and you could easily tell that it wasn’t a produb; it was just a fandub.

But it wasn’t as bad as the next one, the Yukkuri Dub. The Yukkuri Dub sucked so much more than the MANDUB that I couldn’t even take it easy with a pinch of salt, because I take things easy with sugar, not with salt. Whenever I eat salt, I drop dead easy, and by drop dead I mean get salted. And that’s bad if you’re made out of meat.

Now, Reimu will demonstrate the proper way to eat a cookie.

I completely disagree with her opinion, but the point is that there’s still a third fandub. I think ‘fandub’ is a misnomer there, because it’s obviously a produb. The quality is as sparkling clean as the distilled wine you made by scooping a bottle of dirtied oil from the darkest depths of the deepest well off the coast of Finland and distilling it with three whalefuls of Mountain Dew. In fact, it’s almost like the producers of Touhou Gensou Mangekyou purposefully released it without voices just to wait for a produb like this. Which is much better than what the producers of Touhou Niji Sousaku Doujin Anime: Musou Kakyou did; releasing it with voices that cost so much as to bankrupt the entire show. Yeahahaha I guess that didn’t work out very well.

Although you could watch the entire episode simply without voices, I definitely recommend the produb version. Cirno gets MULTIPLE LINES in the produb version, whereas with only subtitles, she only has one line. In the produb version, she gets to say ‘BAKABAKABAKABAKA’, which was undoubtedly the highlight of the show and the only part of the show that actually matters. In fact, you can watch the entire episode now and for free at Nico Nico Douga (sm15360167), since the producers hardly have enough money to hire voice actresses, much less lawyers to sue you for illegally watching their show. That’s why it’s not illegal to watch it. They released it themselves.

And, no matter what Reimu thinks, the music is pretty darn cool.

Yes, the entire OST is longer than the show itself.

Yes, the OST may have been all composed just for the show.

Yes, the entire Fantasy Kaleidoscope OST is on YouTube.

Which was the entire point of Touhou Gensou Mangekyou (kill me Stacy!). Not to kill all these coping fans, but to please all these coping fans. The entire show, from the TERRIFYING DRAMATIC SUSPENSEFUL AWESOME pre-OP sequence mixture of SUSPICIOUS DARKNESS, EVIL PLANS, EATING GHOSTS (if you eat ducks in the ‘banquet of ducks’, you eat ghosts in the ‘banquet of ghosts’), and BODACIOUS brass, to the weird ED sequence of, uh, getting drunk, was all Touhou fanservice. Just like how Highschool of the Dead was completely female fanservice, action fanservice, and gun fanservice, Touhou Gensou Mangekyou was completely Touhou fanservice. There were pointless cameos, pointless pantyshots, pointless scenery, pointless bullets, pointless canon personalities, pointless fanon personalities (look at Cirno’s eyes), pointless 30-second-long battles, and pointless clothing, or should I say, the pointless absence of clothing.

Not that anybody was naked in this or anything (the entire show could be rated G if not for the, uh, deadly bullet fights), but it’s FREEZING COLD outside, and Sakuya admits this by wearing SCARVES and SWEATERS and BOOTS but not pants, or even long socks. She just wears, uh, nothing on her legs. So your neck is cold enough to warrant a HUGE SCARF (who even wears scarves?!), but your COMPLETELY EXPOSED legs just AREN’T COLD AT ALL? Really?

Well, at the end, I can’t say that it was very good.

Touhou Gensou Mangekyou was very much like Black Rock Shooter’s OVA. The story frequently shifts between 30-second-long AWESOME battles and five-minute-long pointless Touhou fanservice. You can obviously tell that the director is an incompetent amateur (just like with Black Rock Shooter’s OVA!). But its decent fandubbing, great art/animation, awesome music, and generous Touhou fanservice more than made up for that. The entire anime seems very much like a traditional anime, with all its traditional tropes and sound effects and plotlines, but there’s one thing that this anime had that no other anime does.

…irides. It’s a type of drug. ZUN uses it. You didn’t think that mere beer alone could produce Touhou, did you?

tl;dr: expecting an Overall Rating? NOPE.avi because as I said, this is only the first episode! Wait for the second episode to come out, and then I’ll be the first on the scene! In fact, I’ll even bet Hefir’s tont he’s cene.

P.S. Why didn’t Yuyuko resurrect :|
P.P.S. Why was the final battle one minute long :|
P.P.P.S. By the way, I am NOT a Touhou fan. Anybody who says otherwise is purposefully and maliciously misleading you :|
P.P.P.P.S. You can’t spell malicious without MAL. Then again, you can’t spell annihilate without ANN :|