I honestly don’t know whether Boukan no Rebellion is part of the official canon, or if it’s just official, but not part of the canon. By canon, I mean things that were incorporated into the original visual novel. Since I assume the original visual novel focused solely on Rintarou, it doesn’t make sense to explore into Suzuha’s past, so this feels very much like it was added as an ‘addendum’ to the canon.

And I’m perfectly OK with that, because it seems to be a natural extension to the canon. By that, I mean that it makes as much sense as the canon. Which is none. None at all. Zip, zero, nada, nix, [insert synonym for zero here], etc. Did you know that ‘Mayuri’ is actually a euphemism for ‘Mushyrulez’? Did you know that the correct spelling of ‘a euphemism’ is not ‘an euphemism’? Did you know that Steins;Gate made no sense at all? Well, now you do! Don’t you feel so proud of yourself? Educational blogging go~!

You can think of time as being part of a ‘secondary time’ – the ‘primary time’ is the time we’re used to, where there’s a clear future and a clear past. But when you go back to the ‘past’ in this ‘primary time’, you’re going into the future of this ‘secondary time’. This explanation makes as much sense as this manga (which, as you will remember, does not make any), so we can apply the instance of the Steins;Gate visual novel to visualize (get it?) this. In the Steins;Gate universe, Suzuha travels backwards in their time, right? Time goes all over the place. But when we’re playing the visual novel, time always goes forwards. There’s a clear ‘future’ and a clear ‘past’ – the ‘past’ is everything in the visual novel you’ve already read, and the ‘future’ is everything in the visual novel you haven’t read. Even though the characters in the visual novel are jumping through time, you, the player, have a clear future and a clear past. 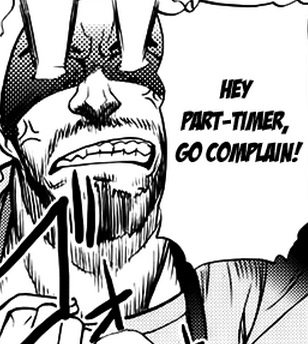 Yes, this makes no sense at all, both my remark and those laser beams shooting out of his eyes. But if SERN has a time machine, they should be able to go through time to do anything they want. Anything. How can Suzuha escape from SERN? All they have to do is go back in time and kill her when she was a baby. Is that so hard?

The manga tries to dodge this point by saying, ‘Oh, the world line doesn’t let SERN kill them.’ That’s like explaining magic by saying, ‘Oh, it just works.’ I’d condone that if they then placed no focus on the magic at all, but if chemical equations and extraterrestrial elements and blood circulation of mystical qi powers comes in, saying, ‘Oh, it just works.’ is insufficient. Steins;Gate places so much unneeded emphasis on transcribing brain waves, 36-byte-character-limits, electromagnetic surges, world line convergence theories, etc. that if you don’t have a solid foundation for time travel, loopholes will show themselves everywhere! An organization that can freely go into any time, anywhere – how the living H.G. Wells (he’s dead, and he wrote THE TIME MACHINE) can anybody do that? One evil man with a time machine can destroy an entire nation. One noble man with a time machine can stop an alien invasion with the power of bendy spoons. One girl with a time machine will probably jump off exploding trucks and cry and shoot hundreds of intercontinental ballistic missiles and be all angsty over another girl because the other girl has pink hair and what girl doesn’t want pink hair? 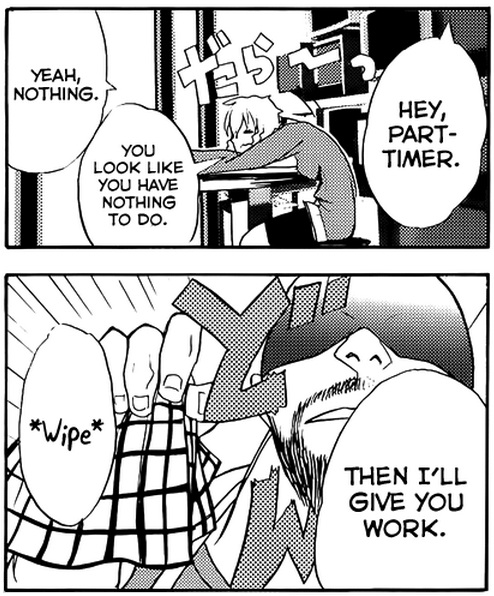 I understand that the future is a dystopia and that there’s no free will and that everybody is sad because liberalism is stupid, but… what happened to all the people? There’s six billion people living on earth. SERN negotiated a world peace without any casualties. Where did those six billion people go?! There’s nobody in Akihabar, nobody in the radio building (which somehow isn’t repaired, even though there’s now world peace and billions of dollars of resources can be directed towards such things), and indeed, nobody ANYWHERE, apart from the people of Valkyrie and the Rounders. Huh?!

I do hope Steins;Gate: Boukan no Rebellion talks more about the Rounders, as well. They’re making them seem almost comically villainous, sorta like Guilty Crown. I mean, really – Guilty Crown could’ve presented the GHQ with actual human characters, but instead, they put people who kill women and step on babies in GHQ. Which side would you root for – the side with the hot, pink-haired Internet teenage idol, or the side with the guy who kills babies? Yeah…

At least it gets interesting now, after converging with the events of the Steins;Gate anime everybody knows and maybe loves. But the contrast between this manga and the anime are too much. On shallow terms, the art in the manga is just meduka-tier derpy. Not Madoka-tier, but meduka-tier. They actually manage to make HYOUIN KYOUMA look stupid – just as he should be. I guess that’s a plus, but the derpy art makes everything else worse. You have Suzuha’s mom tearfully dying, except, whoops, I guess she doesn’t have an ear. The manga would be 300 times better if it were only animated, dark, monochromatic Steins;Gate style. But it isn’t, so I guess Suzuha will be cross-eyed forever. Cross-eyed while her anatomically awkward friends are dying from being shot in the head – EXCEPT THEY’RE STILL ALIVE! Great.

Every story in Steins;Gate was sad – Steins;Gate was really just a compendium of sad stories. However, they sure did a good job choosing Suzuha’s story – her’s is doubtlessly the most confusing and most sad. Except, WOAH – they’re now writing a manga about Kurisu. I’ll bet they’re going to write a manga about Mayuri’s 666 different deaths next.

This entry was posted on 2012/01/29 by Mushyrulez. It was filed under Animanga and was tagged with Animanga, Completely Unedited, Images, Links, Manga, Manga Post, Mushz, Steins;Gate: Boukan no Rebellion.