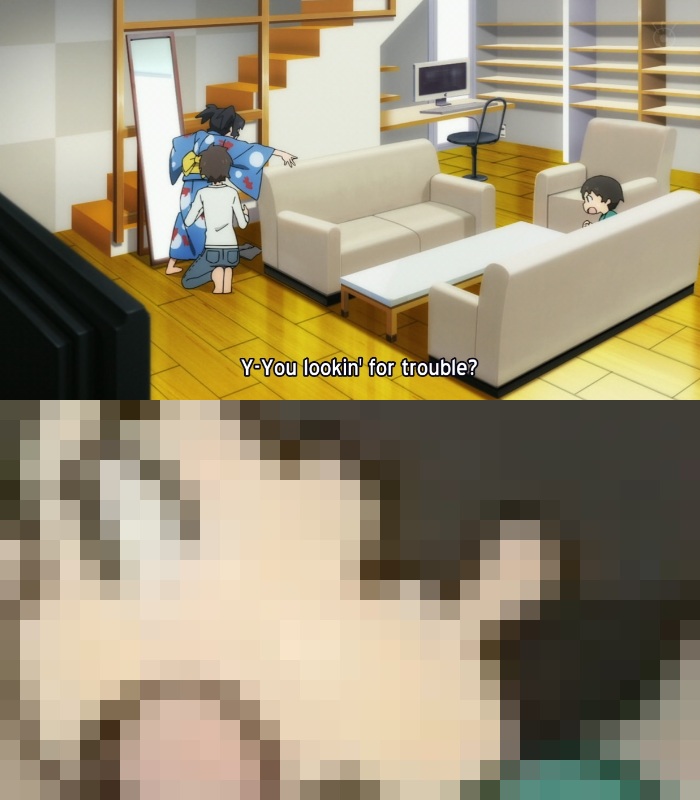 Then MAKE IT DOUBLE, cause it’s time for MORE SORAMIMI! The funny thing is, these lyrics (thanks, Atashi!) AREN’T MISHEARD, because they’re IN JAPANESE! Thankfully, we’ve provided a timely (read: late) English translation for all you Australians out there seeking to drink a sip of a pint of beer or cheer or fuck this let’s go

(Post-Post Edit: Now I realize why this post was late. The episode wasn’t subbed when I published it. I hope you’ll forgive me. Without further ado, I present to you: this post.)

mou yamete! watashi wa mou hashirenai
(Just stop it! I want to un-see what just happened. [Breaking the fourth wall, I guess. Japanese people, you never can understand just how they think.])

itsuka yumemita sekai ga tojiru
(In my dreams the world throws macaroons at me.)

aru hazu mo nai ano toki no kibou ga mieta ki ga shita
(People sometimes throw macaroni at me and I see that it’s delicious and eat much of it so that I get really full and have to poop.)

DO SHIT THERE.
(I am in the process of relieving myself in an excrement disposal facility.)

yami o kakeru hoshi ni negai o
(Unfortunately the blackness of my starry skin made the scorpion unable to cut through SOLID STEEL. Besides my chest was too flat for their to be any damage anyways. I don’t know why I have such a flat chest in my dream.)

mou ichido dake hashiru kara.
(Once again, I woke up and wondered what was wrong with my unconscious.)

kowakute furueru koe de tsubuyaku
(My friend is in a wheelchair because she is sadomasochistic.)

watashi no namae o yonde
(My name is Yonde. [Starting to get delusional here, there’s no Yonde in Black★Rock Shooter (TV).])

yoake o idaku sora kyoukaisen
(I look at the sky and see that Horizon was an awesome anime.)

made no kyori ato mou ippo todokanai
(But unfortunately, if my life were an anime, it would be too lame.)

koraeta namida ga afuresou nano
(My blog’s name is not on Anime Nano.)

ima shita o mukanaide tomatte shimau
(Now, it is time to cook the tomatoes. [Remember, ‘Tomato’ is a euphemism for ‘Kuroi Mato’.])

mirai o ikite itain da, wakatta no
(The future was painful. I understood why – because I’m a time traveller.)

SOU YO
(Like soybeans being squeezed into soya sauce. [As you can see, Japanese is an extremely compact language.])

itai yo, tsurai yo, nomikomu kotoba
(But it hurts. [Never mind about my previous comment. Japanese is weird like that.])

saisho kara wakatte ita, koko ni iru koto o
(From the start I knew that this was going to suck.)

watashi no naka no, subete no yuuki ga
(I told you so, I totally warned you dog.)

hi wo tomoshite
(I get high from smoking tomatoes. [On a related note, anybody who would smoke tomatoes is probably already high.])

wasuresou ni nattara, kono uta wo
(If you ever forget, listen to this song.)

This entry was posted on 2012/02/09 by Mushyrulez. It was filed under Animanga and was tagged with Animanga, Anime, Anime 2012 Winter, Anime Post, Arts, Black★Rock Shooter (TV), Commentary, Engrish, Images, Links, Lyrics, Mushz, Music, Soramimi, This Post is Not Actually About What the Title Says It's About, Videos, Vocaloid, zoom zoom zoom.