I can’t say that wasn’t unexpected. 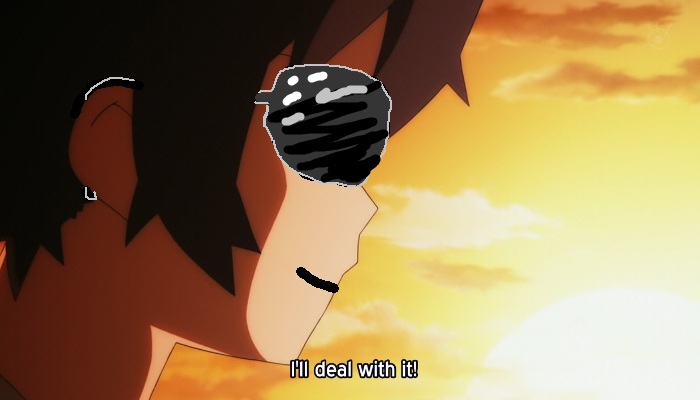 Let’s open up from a quote from our resident Black★Rock Shooter (TV) expert, Aroduc: “This particular Thursday is apparently trying to set a new record for stupidity.”

Well, that’s not too nice. Somebody here evidently doesn’t like Naruto Shippuuden, which airs every Thursday at 19:30 JST.

What does the other, nicer side of the sphere say? Well, psgels did not even deign to give it a single star (he’s the guy who gives every show at least one star, if not two, every episode). Granted, he says that the episode was ‘enjoyable’, but if an episode of ANY anime WASN’T enjoyable… then something’s wrong.

It’s quite easy for anime to be enjoyable. In fact, with a tiny bit of effort, you can make almost ANYTHING enjoyable, as long as it’s not schoolwork, homework, work work, or housework. It’s quite easy to make housework enjoyable too, if you pretend that all the dust are tiny little people waiting to be hopelessly and helplessly squished by a giant magical kilometres-wide quilt falling from the middle of the sky and that you’re a giant evil alien who has to, uh, clean his house. Actually, no, it’s pretty hard to make housework fun.

But making a television show fun? Heck, as long as things move and people talk (or, scratch that, you don’t even need people to talk! You don’t even need people on the screen!), television will be entertaining. You know that feeling when you slouch on the couch, watching the SHOPPING CHANNEL because there’s nothing else to do, and being ENTERTAINED by it?! You should tell me what that feeling feels like, cause I’ve never been there before, bro.

What I’m trying to say is, nothing. 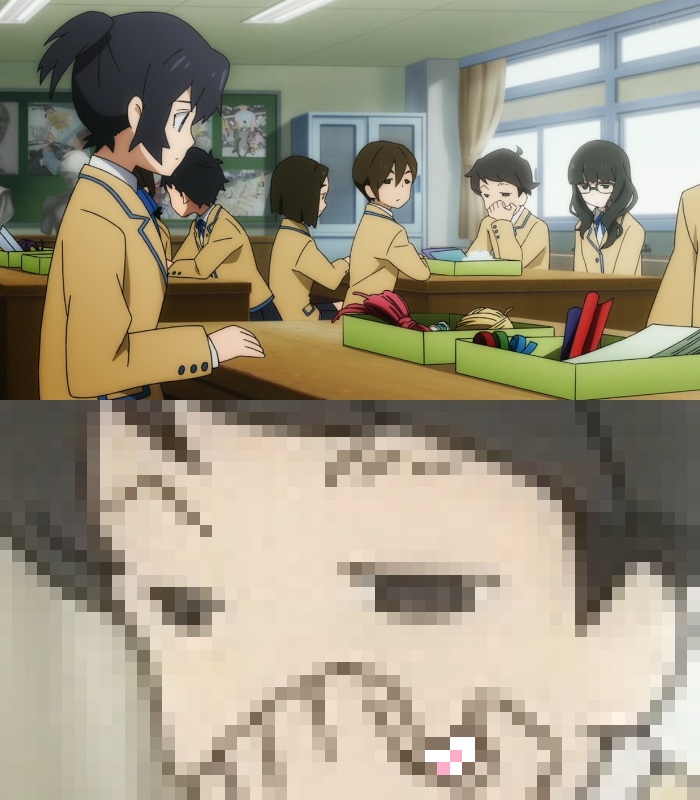 This thread has been at my tongue since the anime started. I really hope nobody’s already written about this topic, because that’d make me seem like a copycat. Which is why it will soon be time to whore this post out to the aniblogosphere so that everybody recognizes that I was the first to write about this topic. And then, Random Curiosity or some big blog like that will swoop in and claim this idea as their own, causing their combined readership of 9,999,999 mindless slaves to fling me off the metaphorical cliff of ingenuity and into the rhetorical pit of thievery. 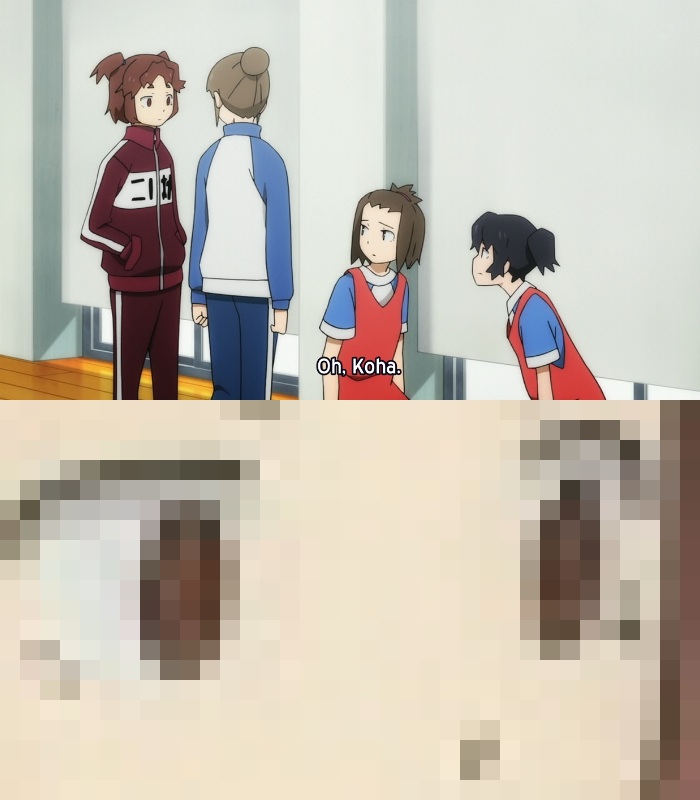 But Black★Rock Shooter (TV) is different. It’s not a metaphor here, it’s a full-on supernatural mystery.

Mahou Shoujo Madoka★Magica was thought to be a full-on supernatural mystery, after the death of Mami. Eventually, at the end, it became just a metaphor. A metaphor for what? Nobody knows. Everybody knows that it’s as ~deep~ as a well off the coast of Finland may be, but nobody can really say what it’s about. Anyways, that’s not the point. Here are the points:

Mahou Shoujo Madoka★Magica had an ‘evil’ fluffy cat-thing who pretended to be good. Black★Rock Shooter (TV) has an ‘evil’ counsellor who pretends to be good. Both have dubious, possibly ‘evil’ objectives that possibly are not ‘evil’.
Madoka in Mahou Shoujo Madoka★Magica had to sacrifice her life to save the life of other magical girls. Tomato in Black★Rock Shooter (TV) has to sacrifice her friend’s magical girl counterpart’s life to save the life of her friend. Don’t even, like, ask me or anything, alright? I won’t answer.
Madoka in Mahou Shoujo Madoka★Magica took it upon herself to [SPOILERS] kill every witch before they were born. Tomato in Black★Rock Shooter (TV) takes it upon herself to [SPECULATIONS] kill every magical girl counterpart before they are born.

And that is my conclusion.

Thank you for reading. 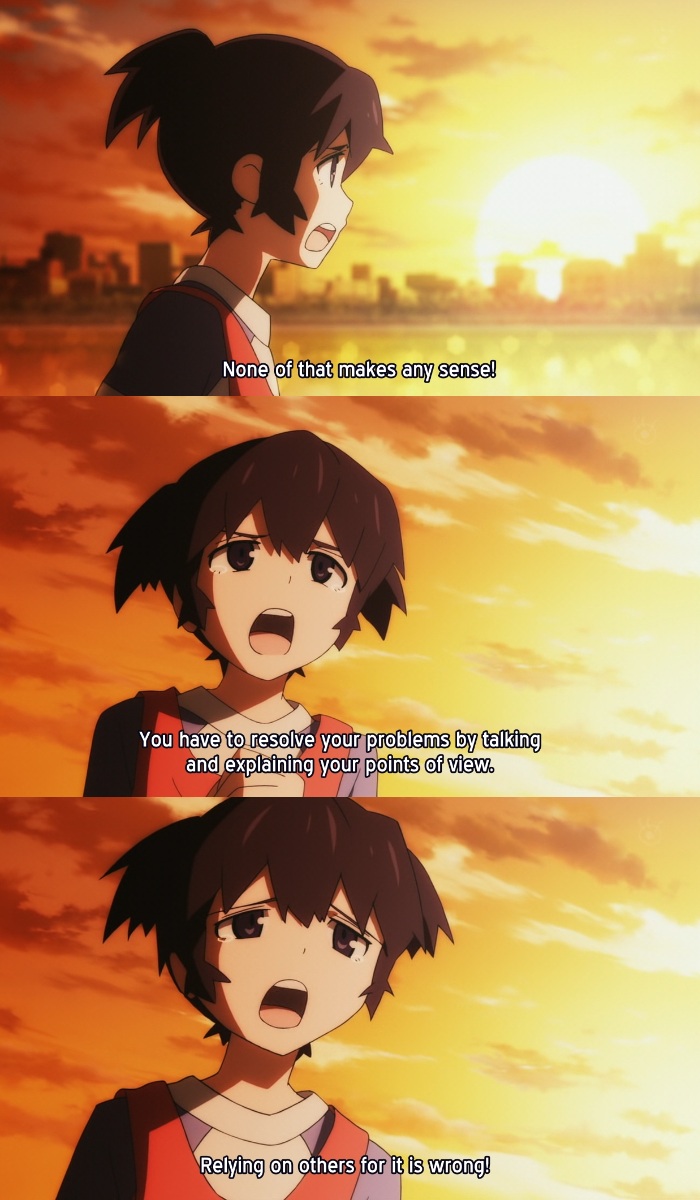 P.P.S. That is to say, they should cut each other’s heads off. Then, all their grief will be relieved, right? It’ll turn into, like, Grief Seeds or something!

P.P.P.S. fucking griefers, taking away Yuu. Wait, this episode didn’t even explain why nobody knew where she went…

P.P.P.P.S. yeah this post was a bit too serious. read the previous post if you want ACTION

P.P.P.P.P.S. Tomato stole [Yomi’s] Precious Thing – her heart!! Like, literally! When you rip a person’s heart out of their body, that’s called ‘stealing their heart’. Bonus points if you do it with a badass green sword, like Tomato did.

P.P.P.P.P.P.S. Kohata wears her name on her shirt… what a loser.