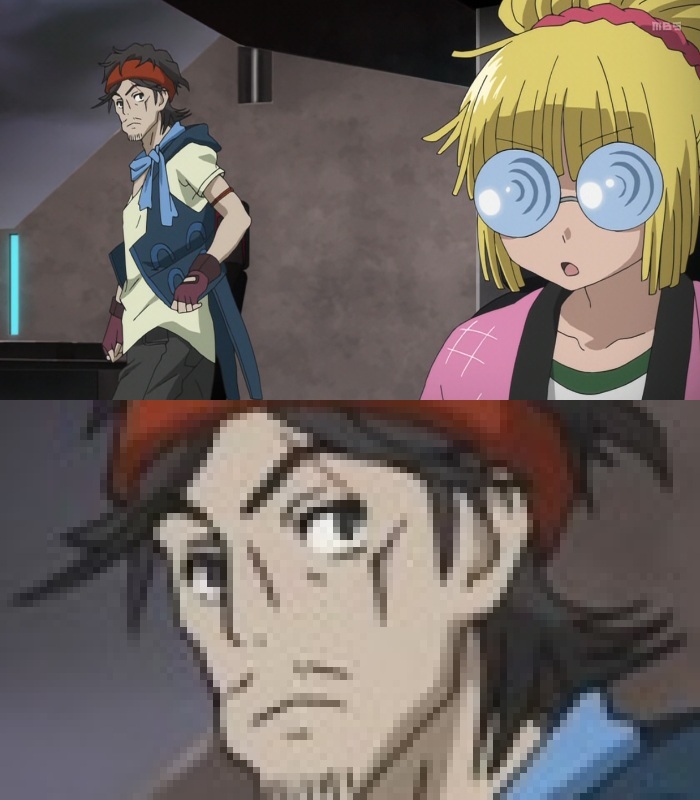 WOAH! Don’t look like Hyakume with his callous obstinacy! It almost looks like this post might be late! Not to worry, because Captain Daylight Savings Time is here to extend the time I have to post by an hour, except not really because time hasn’t been warped like it will be warped in the next episode of More Tsun Pirates. Observe how I shall embed a self-referential pun within the next few words:

First, an obligatory link to Divine of Random Curiosity’s post on Mouretsu Pirates 10, to confirm to all of you that I am indeed not late with this post. Unfortunately, it’s not much of a confirmation as I can simply edit the text in this post at my discretion (which I had just done with the Black★Rock Shooter (TV) 6 post I so surreptitiously pinned to the front page), and furthermore, it’s NOT actually Divine that wrote that post! It’s Verdant, some new writer to Random Curiosity I haven’t ever heard of. Y’know, nobody from the ‘actual’ aniblogosphere even visits Random Curiosity anymore, because Random Curiosity is big enough to form a ‘sphere of their own. You know what I’m implying, right? If you don’t, I’ll tell you this right now: Random Curiosity is fat.

Now let’s talk about Verdant’s post and dissect its many flaws to its very core so that I can vent my anger at Random Curiosity being so much cooler than this blog, O-New. Firstly, there is an improper lack of zoomed-in pixellated images in Verdant’s post. This is simply unacceptable, and in fact counts as two points due to its unacceptablility. Thirdly, um…

…I’ll get back to you guys on this one. 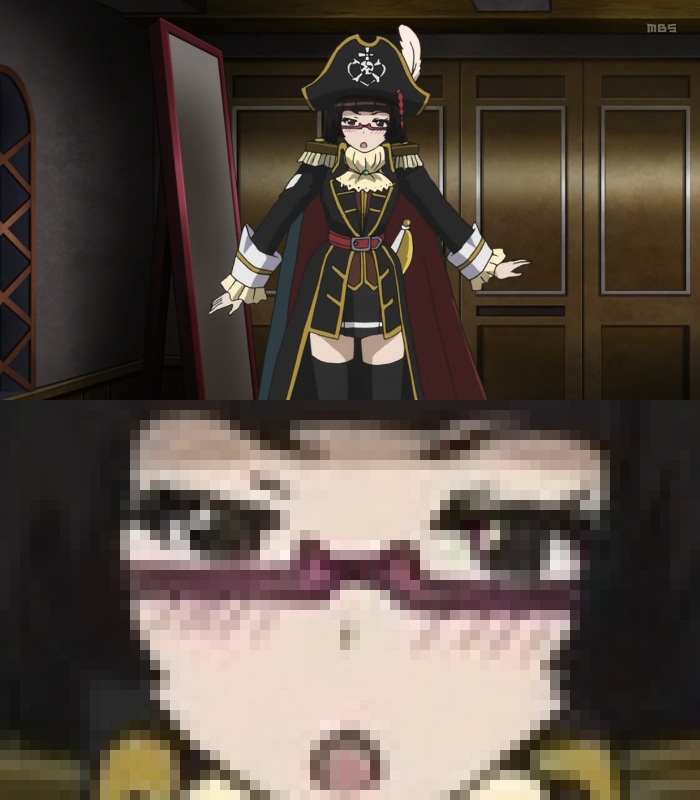 Granted, I must begrudgingly admit that Verdant raises many good points among his post’s many flaws, of which I had just enumerated above. For example, Chiaki is simply a door a bowl. For those new to such esoteric Internet lingo; when you say someone’s ‘a door a bowl’, you insinuate that he has two sides – one flat side (a door) and one curve side (a bowl). What I mean is that people who are a door a bowl have the personality of a bowl and the body of a door. Case closed, moving on to his next point: Mahou Shoujo Kaizoku★Marika. Although he does not mention it directly (electing to use the less formal ‘Mahou Kaizoku Shoujo’ instead), he certainly is aware of this new genre’s possibilities. I must applaud him for this remarkable achievement, and my general approval rating for his post now wildly fluctuates between the reciprocal of 0 and the multiplicative inverse of 0, depending on the shape of your extended real line or your implementation of -0.

Second (note: this entire post is a multi-level list), an obligatory link to psgels of Star Crossed Anime Blog’s post on Mouretsu Pirates 10, to confirm to all of you that I am indeed not late with this post. Unfortunately, psgels’s post is rather short, however, he probably packs the same amount of information in those short paragraphs than I do in this entire post. You’ll realize that up till now, there’s not been a single point about Mouretsu Pirates so far. I think you’ll have to deal with it. Y’know, not few from the ‘actual’ aniblogosphere even visits Star Crossed anymore, because Star Crossed won the aniblog tourney last time. You know what I’m implying, right? If you don’t, I’ll tell you this right now: I don’t know either.

Get it? No, I don’t, because I don’t know. Mouretsu Pirates is awesome because it’s not about pirate-pirates, but about Mouretsu Pirates. As I said, everything’s fake, and that’s what makes Mouretsu Pirates awesome. OK, obligatory blog-plugging done, I didn’t really mean what I said the last few paragraphs. You can read the entire thing backwards if you want. Starting from now, a palindrome: emordnilap a ,won morf gnitratS .tnaw uoy fi toidi na era uoY 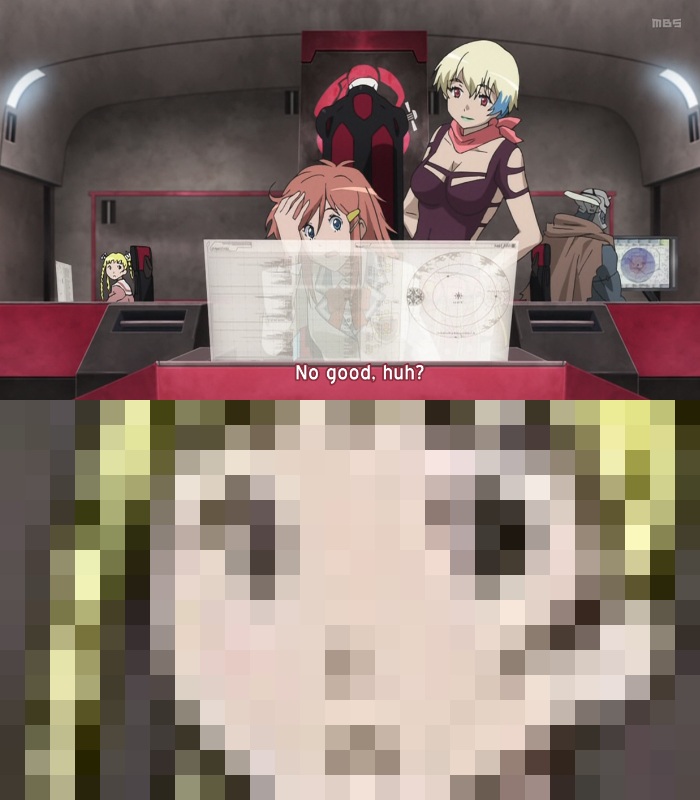 Sigh, I’m all out of steam after last episode’s ~deep~ post about consistency. I think I’ll spend the rest of this post talking about trivial matters that don’t matter, similar to the space of Mouretsu Pirates that doesn’t contain matter. If you want substance, read my previous post. If you want uneducated childish babble, read on.

Actually, I believe I do not need to repeat myself – a reference to the comment I wrote on Crusader and ExecutiveOtaku (of THAT Anime Blog, yes, that anime blog)’s Mouretsu Space Pirates 10 post will do. Just read that; if you do not trust the links I put in my posts, I’ll outline what I say in summary and with significantly less exclamation marks:

Even so, even if all of that is just pointless, uneducated speculation (ask flomu for the physics, I’m just an ordinary high school boy, minding my own business, when suddenly I find out that I’m already dying), even if in the future, they have the technology to explain all this (which is very likely, and I won’t continue defending those points because in the future, we have the technology)…

…Why is there sound in space?!

tl;dr: eating is an important skill in life 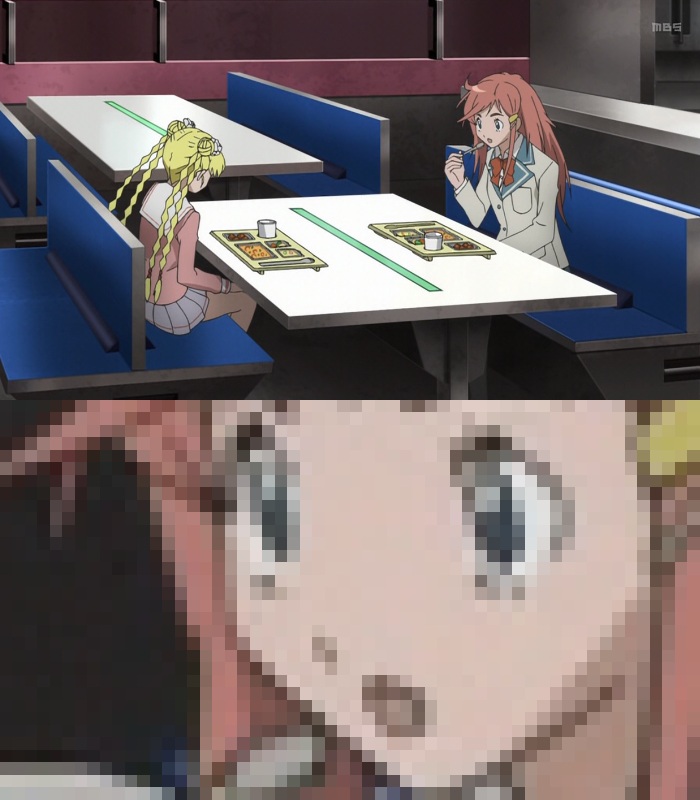 This entry was posted on 2012/03/15 by Mushyrulez. It was filed under Animanga and was tagged with Animanga, Anime, Anime 2012 Winter, Anime Post, Images, Links, Mouretsu Pirates, Mushz, Needlessly Serious, zoom zoom zoom.