This is my first time actually doing an anime in its entirety. I actually ~don’t know~ how long Uchuu Kyoudai will be, but I didn’t look it up not because I’m stupid but because I’m pretty much prepared for whatever length this happens to be.

Sorry for being late. I am usually SUPER SUPER GUILTY about being late and am usually kinda punctual with things, but only now have I been given the OK for writing this post before the preview for Spring 2012 comes out.

That was nonsense, sorry. Let’s get on with the SPACE BROS. 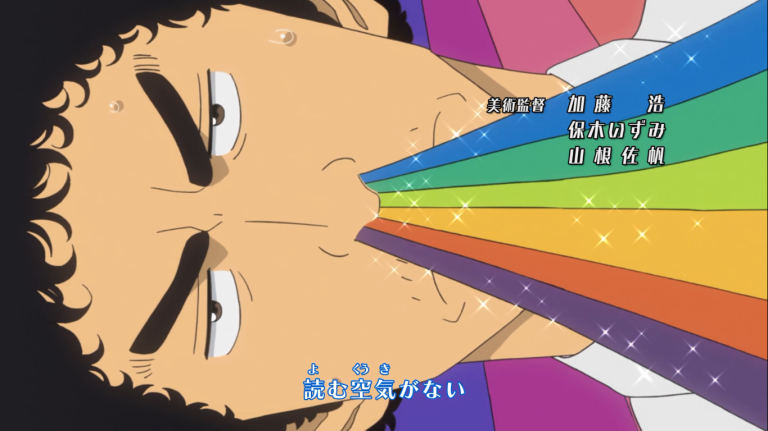 Just as I suspected, this is HELLA HEARTWARMING. Really heartwarming, with its comedic moments. I personally think that this Episode 1 was a really good intro to this series. I can happily say that I enjoyed every minute of it.

The episode opens with strong symbolism. In 1993, a tragedy happens to Japanese sports, as Japan loses its potential spot in FIFA during the preliminaries. Mutta was born. In 1996, a Japanese pitcher, Hideo Nomo, performs a no-hitter shootout, creating an influx of Japanese baseball players in Major League Baseball. A nation triumphs. Hibito is born.

This really shows what is to come in their lives. When the two boys are young, they both share a passion for space once they see a UFO in the sky together. With their shared dream, they meet a famous astronaut together, and the astronaut places his hands behind their backs, seeming to be giving them a push, as if to tell them that they will realize their dreams.

“The older brother should always stay one step ahead of the younger brother.” Hibito ends up accomplishing his aspirations and will be the first Japanese man to go to the moon. His brother, Mutta, becomes a fairly reputable mechanical engineer for an auto company: an occupation reputable but not amazing. Even though he landed in a good occupation, Mutta is still not a step ahead of his brother. Mutta promised to go to Mars on that very day that they saw a UFO.

Mutta’s supervisor insults a picture of Hibito in front of Mutta, causing Mutta to headbutt him while uttering “Zidane!”, referencing an early part of the show. That particular comedic callback made me laugh in my seat for a few seconds, to be honest. After which, he is fired and has to return to his parents. Yes, after I laughed in my seat for a few seconds, he is fired.

It turns out that it is when Mutta goes the deepest into rock bottom that he aspires the most to be at the top. His dreams of going to space are ignited again when he is completely unemployed and no other auto company will accept him.

His parents unwittingly send his resumé to JAXA, and they accept his application. This show is a nice breath of fresh air. The tone is so sincere, with not a touch of BLATANT SENSATIONALISM present. Although I never really was one of the crowd that wanted to be astronauts to grow up, I find that this show is extremely relatable, as it deals with the pure untarnished concept of chasing a dream and familial brotherly bonds.

Mutta is a great character. An ordinary man that gets plunged into an extraordinary world. A person who failed to realize his childhood dream, but is currently realizing it. A kid with bad luck. All of these themes provide a level of depth that is simply not very present in many works of fiction.

Hibito I’m not sure if I like because I simply haven’t seen much of him in this episode, but I know that he cares for his brother and wants him to accomplish just as much as he did.

The parents are very realistically portrayed; the mother energetic and supportive, and the father a stone-cold disciplinary figure.

There is not much else I can actually review as there are quite few details at this point, but all in all I say that it’s really good.

I’m really excited to see how this turns out; I am loving it so far.

This entry was posted on 2012/04/06 by AbsoluteZero255. It was filed under Animanga and was tagged with Animanga, Anime, Anime 2012 Spring, Anime First Impressions, Anime Post, az, Completely Unedited, Images, Uchuu Kyoudai.