I really liked this episode, and although by the second episode I had doubts as to how this will go, this episode really renewed my faith in this show. (Just to clarify, Episode 2 actually made my rating drop to 6/10, even though it doesn’t say so in the post)

Although I don’t think the villains here are particularly good for my personal tastes, I really like what these villains mean for the rest of the series. I liked Black Lagoon a lot because each arc there was a different villain showing a different side of criminals. This episode gives me the impression that it will be the same in this too. These villains represent sadistic assassins who have suffered and gone crazy. 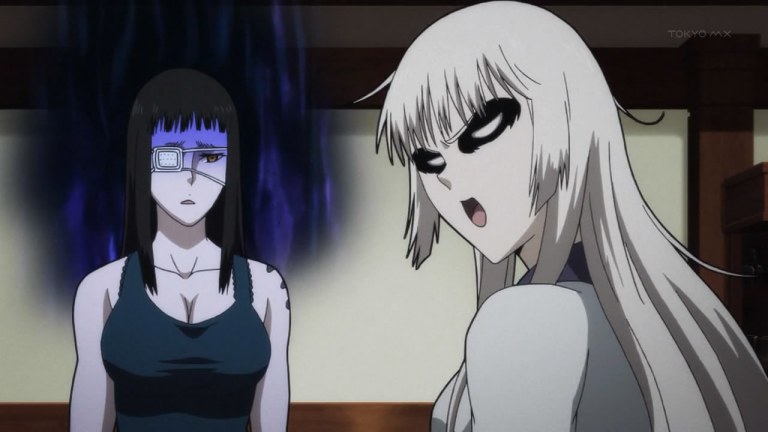 The dynamic between these people is quite different and a lot more happy. You never found any face faults in Black Lagoon, I don’t think. A good explanation for why there’s more humour in this is because this arms dealership functions more like a family than a ragtag group of a bunch of people that don’t fit together. In here, no person is alien to another.

Jonah’s character development is that of beginning to belong in this family. The arms dealership was fairly inclusive, with everyone treating Jonah like a younger family member, even getting out of their way to teach him math. Imagine Revy being taught math.

The explanation that comes after this seems logical enough, but in reality Koko is probably some sort of psychopath. However she probably can’t wield a gun and I’m not sure if she ever directly killed anybody. It would be very interesting to look in her past.

The combat scene here was quite good, what with the use of riot shields and what not. However, just like Lagoon, it suffers from the syndrome of how almost every single bullet misses, even the bullets of professional assassins. I don’t mind, though; who would watch an anime with gun combat if the combat scenes weren’t long enough?

I really like how this will turn out from here, and it sort of cleared my original doubts.

This entry was posted on 2012/04/26 by AbsoluteZero255. It was filed under Animanga and was tagged with Animanga, Anime, Anime 2012 Spring, Anime Post, az, Completely Unedited, Images, Jormungand.