I recently watched all of Queen’s Blade: Rebellion with a group of brave souls. I’m happy to say that we made it through the watch relatively unscathed, though it should be noted that PTSD sometimes takes a while to manifest. After each viewing we attempted to decipher the greater meaning of Queen’s Blade in a colloquium work that was posted on Draggle’s blog. Once we’d finished, both John Sato and Draggle had their final say on the matter. This will be mine. 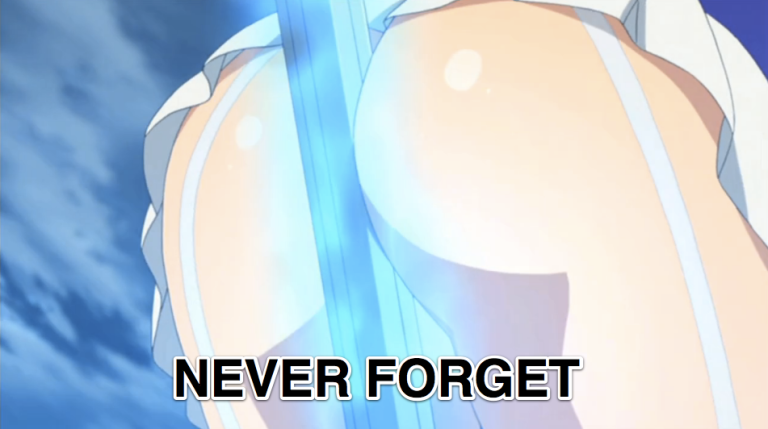 First, I have to get this off my chest:

I really wanted to drop character in that last post of the series on Draggle’s blog, but I couldn’t. I had to ride it out to the end. I wondered a bit whether some readers might think I buy the crap I said about the show. Rest assured, I don’t think Queen’s Blade has any depth or actual understanding of its own culture.

The viewing experience for this was fun. If you’ve never heard someone facepalm, get on Skype right now and do a group watch of Queen’s Blade. Start at the last episode. Nothing can spoil you because you likely won’t know what the hell is going on even if you start from the beginning. Your group will benefit from having a least a few viewers familiar with MST3K or Beavis & Butthead.

With that said, I was surprised in analyzing the show how much symbolism is present. Sure, it all leads to the same place: Holy Pose: Fapping. I’m pretty sure that when the artists and writers plan this out they aren’t even aware of the sheer amount of symbolism they’re including. That’s the way culture works. Eventually we just take things for granted as the way it should be, even when we have no explanation as to the reason.

This brings me to my real takeaway from writing about Queen’s Blade: you need to trust your editorial sources and read critically. I put a lot of effort into those posts. My analysis of the symbolism was at least half honest. If I said an image symbolized something, I meant it. The creativity was in being dishonest enough to piece these together to form narratives that were clearly not the intent of the source.

Imagine if I were to write about a less trashy show but with the same dishonesty. Or if I were to honestly believe that the pieces of the puzzle fit that way out of ignorance or lack of skill. It’s not that difficult to form a completely false narrative using more truthful facts than lies. My favorite part of that series is the post on pantlessness for just this reason. That post has many, many legitimate interpretations. To toot my own horn (yuru yuri, toot toot) I am quite fond of my historical citations in that piece. I backed up my theory with hard facts about the history of religion, going so far as to check them against my history textbook. If one were to ignore that Queen’s Blade is a trashy sexploitation show they might be forgiven for accepting the various theories in these posts.

The group goes on, though. Our next watch is this week, where we’ll be trying to crack the code of Horizon in the Middle of Nowhere. I watched the first episode of this show when season one came out. I hear it never got much better, but I also hear the source material is not so shallow or vapid. I hope this time I can write with a little more sincerity. Either way, it’ll be fun.