I have the distinct pleasure of reviewing a strange story of tolerance and acceptance of those with disabilities. It is set in a town with an excellent program for the multiply handicapped and follows a protagonist who is one of the less disadvantaged students. As the story progresses we are shown the humanity of these children and we learn that the golden rule still applies – even to the handicapped. Perhaps even more amazing is that all of this was told through the lens of a visual novel. I am, of course, reviewing the 2007 – 2008 Key series, Clannad.

Clannad is set in a scenic, though otherwise nondescript, town with a seemingly typical school on a hill. On closer inspection, it is revealed that this is a town of alcoholism run rampant. This is immediately clear by the state of Tomoya’s father throughout the show. However, the secondary effects of alcoholism are where the true scope of the problem is seen: the majority of the school’s population is composed of children suffering from fetal alcohol syndrome. 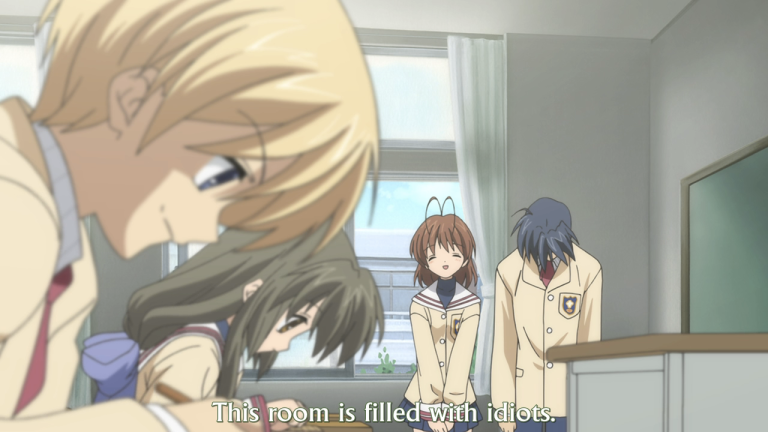 The school is a progressive learning center where children of various handicaps are intermixed. I’m truly impressed with the setup because people of different abilities are able to learn side-by-side. This allows those without mental handicaps to help those who suffer from them, which encourages participation and ensures that students do not fall out of step with society. It is a truly admirable setup, a model for special needs schools the world over.

The home life of these students also plays a prominent role in the show. Here we are able to see how parents deal with having children with special needs, and we are able to judge whether they have adapted to their roles or if they have regressed into the sort of behavior that may have contributed to their children’s disabilities.

Fetal alcohol syndrome (FAS) is a disease caused by a mother consuming alcohol during pregnancy. Alcohol is considered one of the more dangerous common teratogens, and is a leading cause of mental retardation. Typically, this is caused by consumption of large quantities of alcohol, though more recent research has led to recommendations that pregnant women consume no alcohol whatsoever. FAS-affected children are often marked by facial deformities, which explains Clannad’s unusual character design choices. Other effects of FAS include growth deficiencies, damage to the central nervous system, and other co-occurring abnormalities such as irregular heart beat.

Many of the characters in Clannad display facial abnormalities associated with FAS. This serves as our first clue to the origin of their handicaps. Other clues soon manifest as Tomoya interacts with the other characters. It becomes immediately clear that Fuko suffers from severe nervous system damage that has affected her motor skills. Nagisa also shows some milder signs of such an affliction.

Not all of the children are affected equally, though. While Fuko seems to show major abnormalities in physical deformity, growth deficiency, decreased motor skills, poor coordination, and severe mental retardation, there are others such as Kyou, who has the characteristic facial deformities but is otherwise unaffected. Of course, there is our protagonist Tomoya, who appears to be a somewhat normal child who has suffered some loss of motor function in his arm due to an accident. Oddly, he is the only unaffected child the show chooses to follow.

Okazaki Tomoya – This young man exhibits significantly fewer mental and physical abnormalities than the other children within the show. The story largely follows his exploits as he acclimates to being surrounded by multiply handicapped children. Often, Tomoya finds himself exasperated at the limited mental capacities of those around him. However, he keeps a positive attitude and is determined to play a positive social role. Tomoya is shown to have attachment issues at home and lacks a positive role model. His father suffers from alcoholism and his mother is deceased, so he often turns to delinquency to pass the time. Over the course of the story, he learns to control these impulses and in turn, is able to lead his less fortunate peers in many therapeutic activities.

Furukawa Nagisa – A year older than the rest, Nagisa was forced to repeat her senior year due to complications from her chronic illness. Nagisa suffers from FAS, but her problems have not stopped there. Due to gross neglect, Nagisa suffered from failure to thrive as a child and almost died from her illness. Her parents were previously focused purely on their work, and there is strong evidence of habitual drug abuse. Though her home situation has improved greatly, her educational trajectory has been irreparably altered. 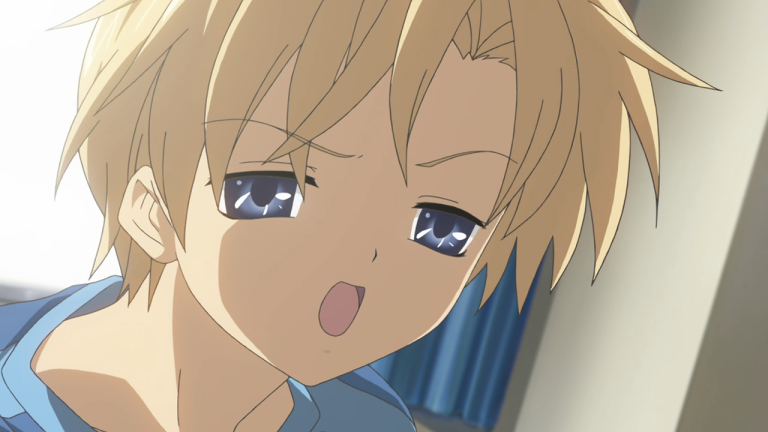 Sunohara Youhei – Another delinquent boy, Youhei is Tomoya’s best friend. Youhei has facial deformities and suffers from mental retardation. He is often frustrated by his surroundings and resorts to violence to solve problems. Youhei lives on campus, which is likely due to his erratic behavior requiring constant supervision.

Fujibayashi Kyou & Ryou – These twins have known our protagonist since junior high. The two of them show signs of mild retardation and telltale facial deformities, especially in Ryou’s case. Kyou is better adjusted and for most purposes a fully functional member of society.

Ichinose Kotomi – Look no further for an inspirational story of success despite handicap. Kotomi suffers from facial deformities and nervous system dysfunction; yet, she excels academically. This gifted child is very reserved and slow to warm up to new people and situations. She suffers from insecure attachment after her parents died while she was young and she was left to fend for herself. These circumstances cause severe socialization problems, but she has persevered and found academic success despite her other shortcomings.

Sakagami Tomoyo – Tomoyo serves as another somewhat well-adjusted child. Her intelligence ranks on the lower end of normal and she is physically healthy, though some facial abnormalities can be noted. Tomoyo has social disorders and has learned to lash out against others violently rather than resolve conflicts peacefully. This may be due to a disciplinarian parenting style at home. 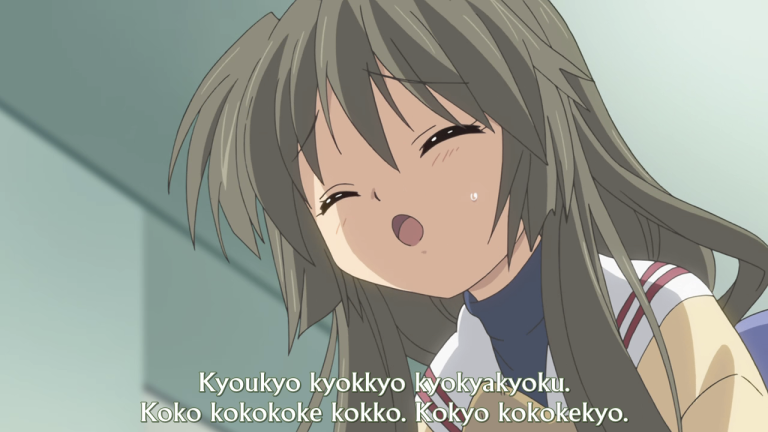 Ibuki Fuko – This is perhaps the saddest case we have to study. Fuko has severe deformities and stunted growth. Worse yet, she is quite limited mentally, and is unable to function without assistance. She believes she is a ghost because she was left in the care of her abusive sister, who is embarrassed by her state and pretends she does not exist. Her sister, Kouko, is a former teacher at the school these children attend and was likely fired for her treatment of Fuko. Fuko has a damaged nervous system that affects both her fine and gross motor skills. She often creates crude wooden starfish sculptures and hands them to other students, believing the students will perceive them as invitations to her sister’s wedding.

Furukawa Sanae – Sanae is a habitual drug user and alcoholic. It is unknown what her drug of choice is because she hides her usage. The effects of that usage are clear to see. She starts her days early and is inebriated before it is time to make the bread sold at the family store. Often, she is so inebriated at this time that her bread is inedible and contains ingredients not normally found in bread and potentially unfit for human consumption. Sanae shows a similar facial deformity to her child Nagisa and suffers mild retardation, though her history as a school teacher indicates she was previously able to function normally in society.

Furukawa Akio – Nagisa’s father is an enabler and a habitual drug user. Akio appears somewhat normal and is physically able. The main concern is his behavior, which can be erratic and distressing.  He does attempt to be a good father, but often, his drug-induced behavior keeps him from performing his duties. He has a history of ignoring and lying to his child to cull favor.

Okazaki Naoyuki – Tomoya’s father is a loitering alcoholic and a neglectful parent. He is a jobless vagrant who takes an extreme uninvolved approach to parenting. Naoyuki means well but is unable to function at all.

Clannad tells its story in a series of arcs. Each arc focuses on one of the young girls whose problems Tomoya tries to help resolve. While this sounds quite altruistic, Tomoya retains selfish reasoning throughout. The exception to this rule is Nagisa’s story, which is the focus of several episodes spanning the entire series.

Of all arcs, Fuko’s is the longest. I lost count, but I believe Fuko’s arc is longer than the entire series. At least, that’s how it seemed while watching it. 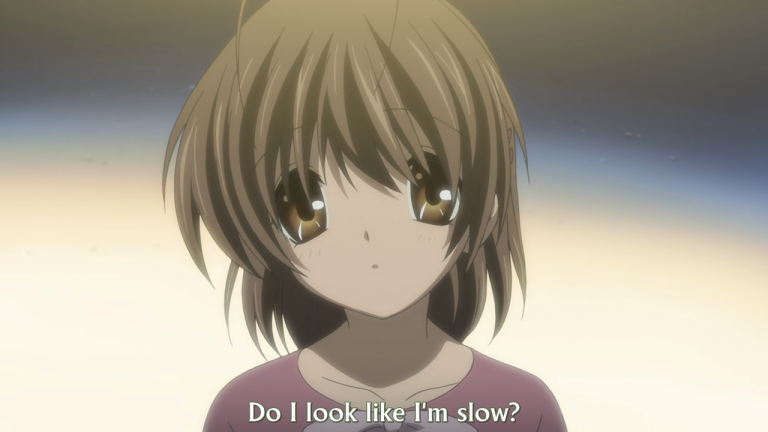 One of the best things Clannad has going for it is the way in which these arcs join to form a comprehensive whole. The story manages to hook each seemingly separate arc back into the central theme of building Tomoya’s multiply handicapped harem, and eventually, furthering his relationship with Nagisa. Fortunately for him, Nagisa lacks the mental capacity to understand the intentions of the other girls and is never jealous.

There is also a side story shown in many episodes about a lonely girl and her junk robot. There is obvious symbolism that ties back into the actual story, but this really just serves as a crappy excuse to use CGI. These segments are absolutely worthless and annoying.

This is going to come as a shock, assuming you’ve read everything up to now, but I still kinda like Clannad. I’m writing this after my second viewing of the show, and as much as I find terrible flaws in it I simply can’t hate it. There are good things that offset the bad, and mitigating factors that allow me to forgive some of its worst features.

I’ve watched dozens of shows that take the same approach to a harem as Clannad does, and most of them don’t have the audacity to make a decision and stick to it like this show. Tomoya is dedicated to Nagisa and even though he flirts a bit with the other girls he is never torn or undecided. Most shows will give you hints that the writers like a character better than the rest, but the protagonist himself stays undecided. I like Clannad’s approach better.

Many of the problem arcs are resolved by the girl rather than Tomoya. While Tomoya certainly plays a part in each resolution, and most of the resolutions are pure crap, at least the female involved plays a part and is allowed to show strength that didn’t come from Tomoya or her love for him. I wouldn’t bother to subject Clannad to the Bechdel test – I’m sure it would fail miserably, but I think it deserves some credit for giving female characters a mild amount of strength.

I also greatly appreciate that Tomoya is portrayed as someone helping for equally selfish yet altruistic reasons. It’s clear early on that he takes an interest in Nagisa. From there, he bases his decisions to help others on whether it will further her goals, which have aligned with his own goal of getting in her pants. It’s not a lofty goal, but anime has this bad habit of making the protagonist out to be ultra-helpful and selfless for no reason. Giving Tomoya a purpose is a step up.

That still leaves us with lots of things to dislike. The animation isn’t great. Most of the resolutions in the series are terrible. The entire Fuko arc is ridiculous and crappy, though I chuckle when she appears later in the series, perhaps out of self pity. Nagisa’s big conflict at the end could have been entirely avoided if her parents weren’t complete idiots. The incessant stupidity throughout the show embodied in every single character.

I can’t give Clannad a great score, but I can’t give it a bad score either. I have a soft spot for it and to give it less than a 5 out of 10 would be dishonest to myself. Rather, I think if you sum everything up it deserves a 5/10 score, but I will give it a 6/10 for the moments it gets right.