So…the second episode of “Little Busters” came out some days ago…and…yeah.Pretty rad! Everyone is happy! There is no more suffering in the world!…and they lived happily ever after and had 30 0000000000000000 babies… THE END!

Now you see, the whole episode is unique in its own way.Before I watched it I thought that I was going to be disappointed a lot.Little did I knew that something truly amazing was awaiting!

By the time I got up from bed,[Around 6.30 AM]I was already hearing the sound of my Landlord’s radio.He was preparing to go to work and thus, I was not in a position to go to take a shower.I turned on my laptop while still wearing only my pants, I opened the fridge, which was almost empty.There was some milk there, so I decided to drink it as the LB ep. 2 was downloading.Alas,I was a but clumsy and I managed to spill 23% of it on my pants. ::No panic at all from my side!::

It was ok.My pants were already stained from piss and semen so I didn’t cared at all.All I cared about was the episode. “Please be a good episode”- I said.My taste in anime is really delicate and I didn’t wanted to ruin my day by watching stuff that I wouldn’t enjoy.And yet, for some reason I decided to give LB a second chance.I took a look around my room-so many empty bottles and cans! I am so lazy…They’ll probably remain here until the day I leave and never come back.Such a strange fate…and yet, they are just bottles and cans.

100% downloaded.Crappy subs, low quality and whatnot.Meh.Nothing new…I started watching it.Nothing special.Nothing interesting.Same thing as ever.The girls in anime are so pretty and nice.I’ll never find girl like that in real life.Life sucks so much.When I die people won’t care at all.People never care about someone when he dies.Why would they? A dead person is nothing more that what it is.

Stupid LB ep. 2…The characters do a lot of things which seem lame to me.Yet, I’ve never done anything like it when I was younger.When I was in high school I used to be alone all the time.I didn’t like being with other people.That’s why I created my own imaginary friend.He was colorful, chubby and used to eat a lot of rice.He was a good friend.We liked to laugh at people, animals and flowers.Life was so simple back then…

Then one day he was kidnapped.There, in a dark room of an old building located outside my home town, he was choked to death while being brutally raped.

If my friends are going to die and bring me sorrow that way, then what’s the point of having friends?

But I did managed to finish the episode.It was a good episode.I changed my pants.I went outside to get a breakfast.Ahhh…it was raining.Such a good day.

The first episode of “Little Busters” came out.

…and I watched it.

For those of you who don’t know, the “Little busters” anime is ab adaptation of KEY’s game “Little Busters”.It’s a game where you do stuff and shit,but that doesn’t matter right now.This is a post about the ANIME!

I thought about posting images from the episode…

YOU JUST CAN’T SAY “NO!’ TO BASEBALL!

OMG THE MALE CHARACTERS ARE SO COOL!THEY FIGHT AND SHIT.SO AWESOME!THEY ARE PART OF THE LITTLE BUSTERS-A GROUP THAT BUSTS STUFF!{there is also a girl in the group.Later more girls join the group <?>}

…AND THERE’S THAT SILLY GIRL AT THE END OF THE EPISODE,WHO TRIES TO HIDE ON THE ROOF OT THE SCHOOL BUILDING WITH A LOT OF CANDY!OH HO HO HO HO HO!I AM WILLING TO BUST HER UP AND HER CANDY AS WELL!SUCH A CLEVER IDEA FOR A CHARACTER!

[I’m sorry,but I didn’t like it.I would like to mention something good about but…I don’t know.Feel free to help me out with this one.]

{The opening-It’s pretty fine actually,but one opening does not make an Anime}

So…it’s 9.50 PM here right now, and I am staying in front of my laptop while thinking what the hell should I write about in this post.At first I thought that maybe I should write again about the Unpopular-girl-Manga-thing-Mushy-lemon,but…I don’t know.The last chapters that came out were really bad in my opinion and…the recent doujin works based on the project that I saw made me hate it even more.Yeah…I HATE IT!!!You know, this is pretty common for projects.In most cases, once they become popular, both fans and the author/s start to **** on the project hard.HARD!

…and this is why the best “Gems” are the ones that are hidden well.

I also thought about writing some stuff about NEET-ness, but the idea sounds pretty stupid and…there’s already Mushy’s posts so why bother?

Writing about video games-not a good idea too, since video games are pretty bad thing.This is why I am following my dream of being a super villain who makes video games to waste the life time of others.[Not really!]{Video games are not bad and are not a waste of time.If you look at things logically, in the end all things will be a waste for a person when Mr.the reaper comes and steal his/her briefs/panties.} 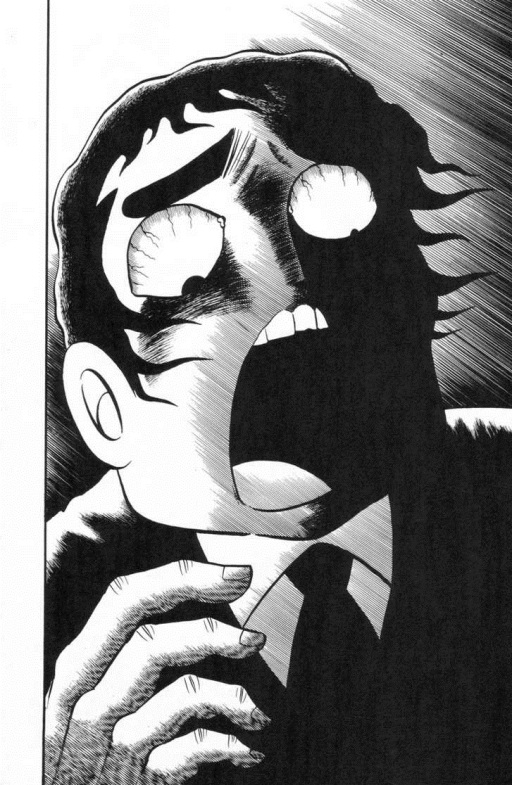 So like, hi there.I’ve decided to corrupt Mushy’s blog once again with my awful posts.Cuz you know…that’s what a pro-blogger normally does.He/She corrupts.

Anyways, this post is not going to be for what I wanted it to be, simply because reviewing an over-a-20-years-old-Manga is not something worth doing.

Besides, what can I really say about Gaki Jigoku?It’s a Manga.It has plot and art, pretty acceptable, probably not by all people in general, but still…

You know, it’s just the same old nut in the dusty sack.I still think that checking something for yourself is much better than reading a review/preview/critique statement and getting a wrong impression on the presented subject.

Like you know, I can say that this Manga is awesome, with pretty solid plot and whatnot shit, which may or may not lead you to believe that it is good actually.But once you check it out,there are 80% chance that you are not going to like it.And not because of its content, but of the way it is presented.

END_OF_DOCUMENT_TOKEN_TO_BE_REPLACED

The rise of Nee-San.The rise of the rainbow shark.The nuked Japan as we know and want it.

Chikku Nee-san is a Gag/Comedy Manga, with pretty short chapters[7 pgs. each], which means that it’s worth reading it.Although only 8 chapters have been translated so far{By thepeelingpotato-group}I find Chikku Nee-San to be pretty awesome and entertaining.(Unlike Mush-*cough* *cough*)

Plot-None.Girls are girls and they make models in a club for making models.Plastic models.Plastic mind.Plastic Fat Man and Little Boy.3 Girls just fooling around, doing silly and… **^^&} things and…more. 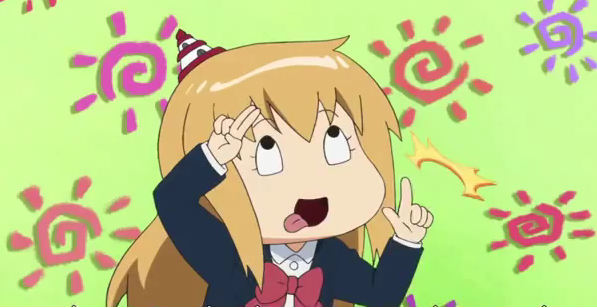 There’s ONA series of this.Each episode is less than three minutes, so you can just go to watch them all. [4 episodes.For some reason MAL is saying that there are more,[{They are going to make more???}] but then again… MAL!]

The comedy and gags/jokes in this Manga are weird.Some are pretty dry, while others are pretty good.Of course, some are a but forced, but then again, comedy today is all about forcing gags and jokes up your ass.

…and you see, the characters from the modeling club are all wearing plastic models on their heads.THAT is unique and it shows that they feel pretty secure about themselves.Life…app…and BWEH!It’s pure awesomeness in a bucket. 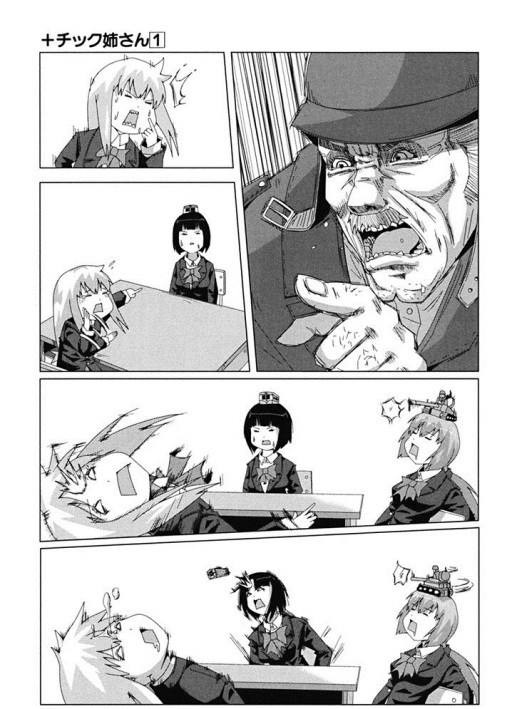 At first I actually thought that they are wearing them because their club does not have a lot of money and thus, they are using plastic models due to the low budget. Although it was a silly idea, I was not able to stop laughing when in one chapter they received…um, less than 2000 yen?

I guess I was right… ~Hahahahahaha!

Oh, yeah… the ONAs…they are pretty great too.I forgot to mention that.The animation and voicing is pretty acceptable and…I dunno.There is really nothing much to say about this.It’s just that…it’s short and simple. 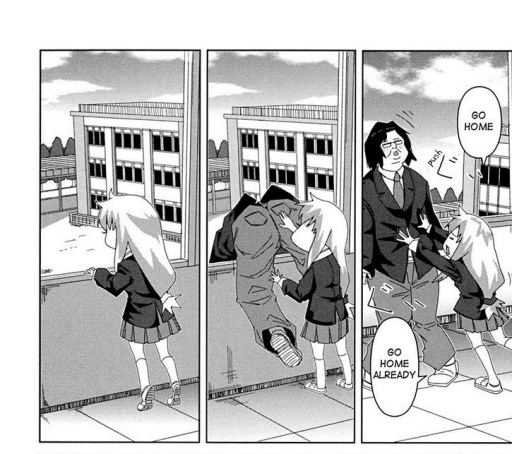 PSP: Plastic Nee-San is now coming to your town.Be sure to buy all the tickets before your neighbor’s dog!

Might be a dinosaur related post:Long-name-manga and why people are are dumb

Have you heard of the manga “Watashi ga Motenai no wa Dou Kangaete mo Omaera ga Warui!” ? I bet you did.If not, here’s some info on what’s it about:

It’s about a girl[Kuroki Tomoko] who sucks at social activities.

There. That should be enough information for you to get the idea about it.

No, I am not going to write a review about it. There are already plenty of these flying all over the internet. For my first post in O-Phew, I decided to write about people’s reaction/opinions of “Watashi ga Motenai no wa Dou Kangaete mo Omaera ga Warui!”. 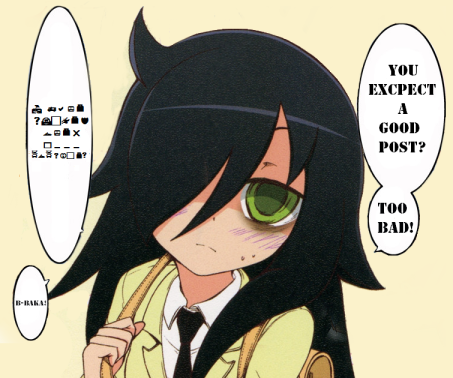 But…Tomoko has a friend.It’s only one, but it’s still something.So what? People these days need to have billion of friends to count as a “social” persons? HA!

Why are people doing this? Into what kind of freaks they have turned into? Forums and blogs all over the internet are filled with this crap!Should we blame the author? Nope.The author worked hard(?) to make a pretty entertaining Manga like this. <<<It was created for this purpose.Not for a reason to bitch about how your life has turned you into a public toilet.[<<< Mushy is probably going to fix this and ban me for life. Don’t do it man I love you!]Manga is made so we can enjoy it as an activity<reading> in our free(?) time. Sadly,some people does not share my point of view,but who cares? 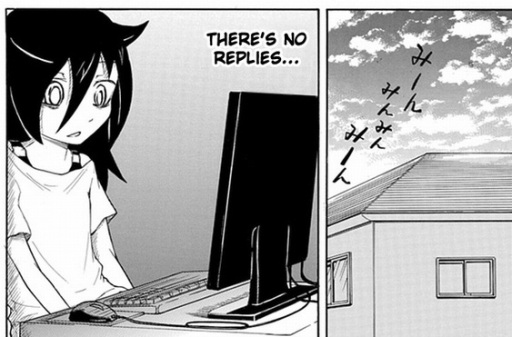 …and there were those who decided that Tomoko would be a perfect “Rape Victim”. Those people are awesome.