That’s right. Take the capital letters of that title, and what do you get?

Wait, no, that’s not right. That sounds too much like ‘K-On’ to be on a blog like O-New, which is entirely safe-for-moè-haters and quite dangerous to moè. Take out the N, O-New’s supposed to be Onew anyways (but it isn’t, because Onew sucks.)

END_OF_DOCUMENT_TOKEN_TO_BE_REPLACED

[Note: Why is this O-REW 8 when the previous O-REW seemed to be O-REW 6? Well, I manipulated the boundaries of time and space to rewrite a post from a year ago, and that’s O-REW 7, which nobody (well, maybe four people) has read yet. So go read it!]

Yes, all the recent posts are random and stupid posts. But I can’t post anything else! The only other things I can post are anime posts, manga posts, anime half season reviews, and manga quarterly reviews. However:

Thus, all these posts are just stalling until I finally finish my Winter Preview or Fall Reviews. Which won’t happen anytime soon.

Anyways, as you may have noticed, all of my recent posts have many things that don’t actually deal with the subject of the post – whether it’s about Portal 2, Katawa Shoujo, Chinese school, or . Thus, I have resolved to resolve this error in this post, which is coincidentally neither about resolving errors nor about resolving to resolve errors. Instead, it is about Baka-Raptor, known to most of the English-speaking world as ‘Baka-Raptor’.

END_OF_DOCUMENT_TOKEN_TO_BE_REPLACED 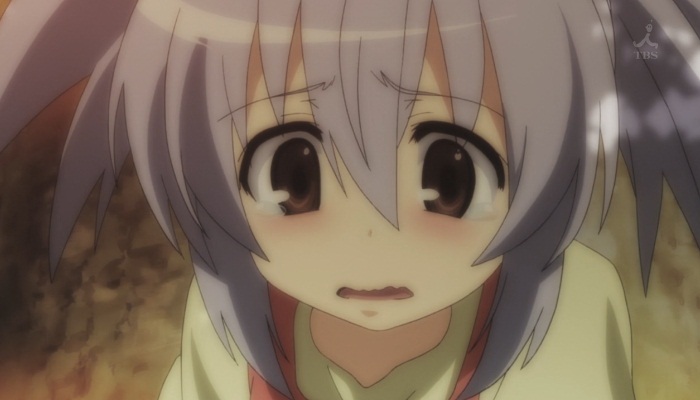 This is my face after finishing the anime.

END_OF_DOCUMENT_TOKEN_TO_BE_REPLACED

O-NEB 4: the Adventure of the Speckled Band

Snakes do not climb ropes.

END_OF_DOCUMENT_TOKEN_TO_BE_REPLACED

…So, this is the (very late) Part 2 of Presentation Effect…

…Hopefully, at least some of you found it somewhat interesting… comments are welcomed (by that, I mean I NE3D MOAR COMM3N75!11!!!1seveneleven!#!11)

…Anyways, I was sitting through another presentation in-class one day, and this time, it was in a play format (with two people presenting). The play itself was quite entertaining and humourous; however, me being me, I won’t look into the strengths.

This would normally be quite fine, as plays aren’t speeches, and thus casual figures of speech may add effect and a tone to the play.

However, they were reading off a script.

Sure, this would be quite fine too, if they rehearsed with the speech and presented without.
BUT THEY WERE PRESENTING FROM THE SPEECH.

Now, here’s what I don’t understand.

Sure, you could say that the added casual effects made the play more realistic, as it was actually a conversation (notice how I’m gradually degrading this)…

However, they were clearly reading it /directly off the speech/, clearly demonstrating the Presentation Effect (it didn’t sound casual at all!).

I just don’t understand why people would do something like that. It makes the presenter seem less professional, doesn’t make it sound casual at all, and just degrades it from the feel of a conversation (via the Presentation Effect).

I don’t know where I’m going with this; anybody care to elaborate further..? >_<

http://arstechnica.com/gaming/news/2010/03/the-closet-is-opened-xbox-live-welcomes-lbgt-signifiers.ars
^ Microsoft’s Xbox live now allows you to show your orientation (Gay, Bi, Straight, Transgender, Lesbian), which makes the world ONE STEP FURTHER AWAY FROM BEING CHRISTIAN..! WOOOOOOOO (no offense Christians)!!!!!!!!
http://money.cnn.com/news/newsfeeds/articles/marketwire/0594062.htm
^ Mochi is creating a global “Game Developer Fund”… of $10 million. @_@
http://www.joystiq.com/2010/01/19/game-informer-no-half-life-2-episode-3-for-you-in-2010/
^ There won’t be any Half-Life game released in 2010… ;-;
http://www.sankakucomplex.com/2010/03/05/korean-otaku-marries-fate-testarossa-dakimakura/
^ A Korean otaku marries… a pillowcase.
http://news.bbc.co.uk/2/hi/asia-pacific/8551122.stm
^ A South Korean couple let their 3-month old baby starve to death while caring for a virtual one..
http://www.tipb.com/2010/03/07/steve-jobs-confirms-10hr-ipad-battery-life-ipad/
^ Steve Jobs confirms iPad’s 10 hour battery life…. on his iPad…
http://www.gamepro.com/article/news/214321/ea-starts-dead-space-2-fatality-contest/
^ EA allows gamers to submit their own Dead space 2… gruesome… fatality… My stomach isn’t in the mood for this…
http://www.thedenverchannel.com/news/22769137/detail.html?hpt=T2
^ Preschool refuses to admit student because she has two moms… once again, Christianity’s stupidity comes to the rescue of us all… -_-
Oh, and subscribe…! :D That’s all for today…!

Alright, so, why didn’t I have time for links “yesterday”…?

The answer is simple; my parents finally noticed that 5 hours on the computer a day and sleeping at 1:00 isn’t exactly healthy for me.

…So, they asked me what I did on the computer.

…In reality, I was merely procrastinating (I’m looking at you, twitterers and kongregators >:O).

…Thus, they decided that this procrastinating was, obviously, bad for me. I got a pretty harsh lecture and was sent off to bed, post unfinished.

…Obviously, to me this was a major blow to my “happiness” and such. Not that I had any to begin with (I’m trying my best to be completely neutral/normal in all aspects)…

While I was sleeping, I had to become philosophical, because I wasn’t philosophical long enough for the past year.

…It all came to me completely and suddenly; this is a turn for the better.

Firstly, I will now finally have the stress and harshness of my parents to support me in getting my homework completed. I’ve never had the pressure of that before (for very long, anyways), and so always got my assignments in late and in horrible quality.

Secondly, I will have to be more efficient in what I do during those vital 2 hours that I have per day while my parents are gone. This is basically squishing my 5-hours worth of time into 2; hard, but it’ll improve my productivity (for yes, I’m thinking of productive procrastination).

Thirdly, my eyesight might come back to me. Completely tentative, however.

And finally, this, where it should actually hinder my goal/dream of becoming a flash game designer (and drinking lots of beer and the like), it’s actually supporting it by strengthening my belief that PROCRASTINATION IS PRODUCTIVE. And thus, I shall focus my non-homeworking energy all on… doing whatever I was doing before.

..Another circle post, I guess. But the main thing now is that I will be online less, and thus will have less links, post less often (maybe), and appear for shorter periods of time on Twitter. D:

^ Yep, we’ve all heard of Ribbon Hero. There was another article somewhere saying how it decreases workspace efficiency; I’ll look into that later….

^ Yay, job opening…! Though I doubt any real flash devs. are reading this blog… If you do apply, make sure you can actually code… -_-

^ Hmm, new blog… I feel sorry for these pets. I feel even more sorry for the humans who own these pets; I’m assuming they all have some sort of a mental disorder -_-

Maybe more things tomorrow; maybe not. Thanks for reading…!

Yeah, the title of this post isn’t really good. Anyways, “Presentation Effect” is going to be my little I-don’t-know-how-much section long series of… thoughts… on presentations, specifically presentations in a classroom setting. …Why? Firstly, I thought there wasn’t enough actual info on this blog. Sure, links are great and all, and everyone wants to see my room, obviously, but it’d be better if this was a “content blog” instead of a “web log”. Twitter’s for logging (environmentalists can now get angry)… Secondly, it’s presentation week over at my school; I’m seeing lots of presentations and see the same… things (my English vocab. is totally 12th grade) keep on repeating. It’s getting redundant, excess, extra, supererogatory, surplus, unnecessary, and unneeded (as was this sentence)… Finally, I’m bored. Let’s get started. So, what is this “Presentation Effect”? It’s just something thought up by me. That’s right, this does not actually exist. When somebody presents with a speech in hand and when they present by just talking (informally and the like), you could always tell (as long as the speaker isn’t professional, keep in mind this isn’t University-level speech-presenting yet) the difference. Common traits of speech-performing include (at least from my experience and observation) a better pace of speaking, a louder/clearer voice, and some professionalism in the voice. However, with the casual tone, there seems to be more um’s, uh’s, and the like, more eye contact (which is a good thing), and failure to end sentences properly. It seems that the periods in the casual tone are commas… for example, if the sentence that should have been said was: “I believe that purple lemonade should be sold for less money.” it would sound exactly like that if it were a speech. If it weren’t, it might have sounded something like: “So, I think that like purple lemonade should be sold for less money, [space] …?” Most of the time, it’s also faster than normal. I don’t know, I can’t really explain this; if you’ve ever listened to several presentations being presented in rapid succession, you might notice this; try to see if this is the case after reading that post… Most of the time, I see this as a negative; although it may seem that you understand more if you present without a speech, the tone of your voice should remain the same throughout. Right now, I’m mostly criticizing the casual part of the Presentation Effect (yes, capitalized). These include having a less firm voice, as if you’re not sure of what you’re talking about, and generally making yourself seem less educated about what you’re presenting. The thing that I just don’t understand is why people would continue having the Presentation Effect, and the prevalence of it in general society. You’d expect people who talk so loudly outside of class to be able to use the same voice inside; but no, they just HAVE to switch to a tiny voice nobody can hear without a period or a sentence that doesn’t end in a question mark/three dots in sight! What’s even more stupid are the people who have a presentation, have a speech, have EVERYTHING prepared, and is halfway through a perfectly fine presentation when suddenly their voice drops completely; and that’s when you know they haven’t actually prepared. Another excellent example of the Presentation Effect is during “preambles” before the speech. It sounds like it’s a completely different person (which can be interpreted as good or bad) during the presentation and the preamble. I’m not saying there aren’t people who aren’t using the Presentation Effect to their advantage. Most, if not all professional speakers sound casual and informative at the same time; this is because they maintain one, even tone, even during their regular lives. This isn’t to say they live life in a monotone; this is to say that they don’t suddenly change into a completely different voice when it’s time for a presentation. Now you’re probably wondering: Wait, wait, what was this about? Unfortunately, I don’t have the answer to that, and I don’t have a point to the above statements either. It’s just something that you might want to observe in the near future. Tell me if you have any further observations. …And I have no time for links right now; I’ll post them in approximately 6 hours. Thanks for reading!