What: This huge-*** gun does not shoot bullets. It does not shoot missiles, bullets, lasers, boomerang blades, corrosive goo, sparks, or shotgun shells. No. See “Why”.

How: Something along the lines of what makes pretty much every freaking gun work. HAXSHENANIGANSANDEVERYTHING. Who really cares, though? IT’S AWESOME.

Why: It shoots black holes. This is no microscopic LHC black hole producer. This makes BLACK HOLES. This kills anything on screen. Excludes you. Screen shake added! This black hole is like 5 yous tall. IT RIPS THROUGH HELICOPTERS LIKE BUTTER KNIFES THROUGH BUTTER. 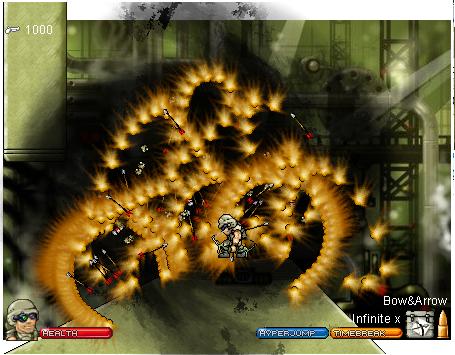 SON OF A BLEEPING BLEEP FEST

Actually, the BHG does not create all the bullets, arrows, or grenades in that picture. Those were there just for show. The ominous black shadows in the middle of all this is a BLACK HOLE that will ABSORB all those loverly things into it, thus removing all the lag. The arrows specifically prove that that guy is EIRIN

Yeah, we already did a post with a weapon from FO3.

TO HELL WITH RULES

FOR TONIGHT I MAKE AN EXCEPTION TO REPETITION RESTRICTIONS

TONIGHT, SPARTANS, WE DINE IN HELL IN THIS HELL-O WHILE EATING JELL-O

Earlier in this game, you will occasionally find a “Fat Man” off somewhat tough enemies. Remember Hiroshima? Yes, references are great UNLESS THEY’RE HISTORICAL in which case [hyena] THEY’RE HYSTERICAL [/squeaking]. Even earlier from that point, you will notice items referred to as “Mini-Nukes”. Also, these items are quizzically organized in the “Ammunition” category. You may, at this point, wonder what these ammunition items are for, excluding selling (these are rare and sell for a LOT). That is where the Fat Man does. It shoots these mini-nukes. To hell with this “mini-” prefix, these things make pretty big explodershuns. AND THEY HURT. The only problems with M-Ns:

2. They can hurt you with their insane splash radii, and

3. They are not as big as the nuke in Megaton, which is taller AND fatter than YOU (you can’t get fat >.>).

And then the E-MIRV comes in.

The E-MIRV is not so mere as to be able to be found off mere mortal enemies. No, you must (practically) go through HELL (not the Deathclaw Sanctuary, where you can find medic power armour) to find 5 “Keller Family Transcripts”, and then venture through this weird building for a long time until you reach a freaking terminal that will only let you past with the passwords in the transcripts… AND THEN YOU FINALLY GET THE MIRV (with bonus nukes!)

What is different from the Fat Man and the Experimental MIRV? For a start, the E-MIRV is more powerful. How art thissa a-being a-possible-a? After all, the Fat Man shoots a NUKE. Hint: Shotgun rain with radioactive properties.

…Of course, we were talking about the Fat Man back there. The MIRV shoots 8 nukes. HECK YEAH. You have like a 50% percent chance of killing yourself every time you fire the [PROFANITY]ing weapon, just because of splash. Awesome sauce is awesome, shotguns, and Experimental MIRVs. I’m sure the only thing it CAN’T take out in one shot is Liberty Prime >.>

Yes, you’re prolly thinking about how a glowy orb not much bigger than Sonic’s oversized, bobblehead-esque head can be better than

But it is. Because it’s

Etc, etc. Course, them’s not the REAL names, but STILL.

I mean, that thing is all of those things. Most notably the tanks.]

And that is an incentive of awesome.

Because I like making up abbreviations, this is a “HELL-O”. I was thinking “HELL”, but this, and possible other installments may not fully pertain to elements of Subterranean Animism or Phantasmagoria of Flower View or [Big Word] of  the [Obscure Adjective], etc.

As mentioned in the title that happens to be in font upwards of twice the size of this font, this HELL-O is about Awesome Weaponry. By the way, this is a top ten. Awesomeness is not necessarily judged by destructive power. Also, as I have not played every game in existence, there will be better weapons. Also, I am aware that people will not agree with me on all counts.

What: The Rock-It Launcher is not a rocket launcher. It is a miscellaneous-junk-that-is-otherwise-useless launcher. The RIL can be loaded with any items in the “Miscellaneous” category of your inventory. Items shot can be picked up, and will arc.

How: Various schematics (four or five of them) for this awesome weapon can be found throughout Washington, D.C. You can buy one of these schematics from Moira Brown in Megaton, although it might cost you a fair amount of caps. You can do this even if you blow up Megaton, because Moira Brown will STILL BE ALIVE, although she’ll be a ghoul.

Why: The creativity of this weapon is above and beyond. It also provides the developer with an excuse to create the ability to pick up random crap and SHOOT IT AT A FOREIGN HEAD IN VATS. For awesomeness, I personally think that death by high-speed teddy bear would really suck, because those hurt. Or plunger. Or garden gnome… I was personally thinking of shooting one of those conductors, or maybe those pilot lights…

How: Unlockable by completing certain criteria. Only 5-6 are easy to unlock, and none of them are too easy at all to dodge.

Why: I can’t beat any of the 4 that I’ve unlocked: Unseasonal Bug Storm (Wriggle), Blind Nightbird (Mystia), Emperor of the East (Keine), and Lunatic Red Eyes (Reisen). Mostly because I suck.