Let’s continue with Ore no Life Updates ga Konnani Boring Wake ga Nai posts. I’ve basically GIVEN UP ALL HOPE on NaNoWriMo after being SO BEHIND SO BEHIND. I expect to finish my novel in February. Or March. Or November of next year. :(

I’ve also changed to WINTER blog settings, which automatically makes me WINTING. Get it?! IT’S A PUN! Feel free to COLDment if you have any better Winter puns cause my mind is FROZEN! ‘Snow big deal though. HA HA HA I bet you’re DYING of constipation right now 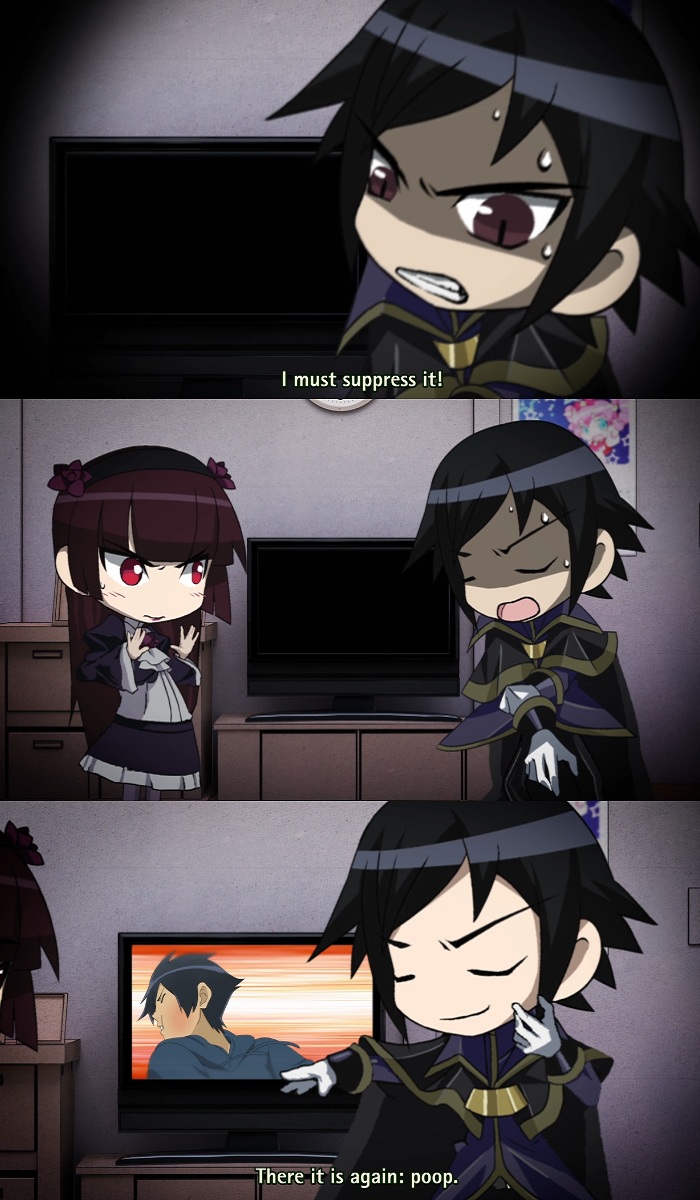 END_OF_DOCUMENT_TOKEN_TO_BE_REPLACED

With a huff and a puff they blew up the stuff in the house that was tough and they started to lust for the pigs weren’t enough to feed their disgust with the lack of food.

END_OF_DOCUMENT_TOKEN_TO_BE_REPLACED 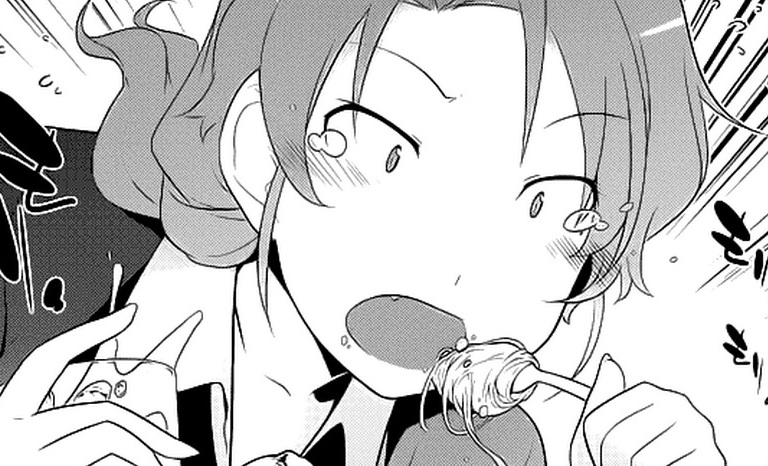 So, I’m just going to use this post to talk about my life, which is like several thousand times more interesting.

I hit a low point in my life when houraiguy’s recently published post turned out to be INCOMPLETE! This was wholly because of my incompetence as a dictator, and I apologize profusely for the embarrassment it may have caused. It was truly a disastrous fiasco that has put O-New’s entire reputation to shame. Now, nobody shall treat O-New as a proper blog anymore after such a failure.

And then in NaNoWriMo, turns out I’m writing more like (or should I say, less than) a thousand words a day (although it’s really more like 1.5k words for two days and doing nothing the third). I guess I could back out the easy way and say that I’ve written far more than 50k words every month on my blog, every month (this is untrue, it’s more like 20-30k), but that’s the lame way to do it.

Instead, I’ll continue at this pace of a thousand words a day, and probably finish in mid-December. Really, I should’ve just written fifteen short stories and stuck them together, but instead, I’m writing a large story that’s still really just fifteen short stories stuck together. Next NaNoWriMo, I’ll probably continue with this novel, but write them story-by-story, as right now, I’m writing them section-by-section, and thus, the stories don’t properly flow.

tl;dr: lazy, no time for posts

But One Day: Part One

It’s Remembrance Day. Perhaps posting this now makes some sort of sense, since the prologue had some whiny kid ‘remembering’ what happened that day, which is outlined here, in Part One.

END_OF_DOCUMENT_TOKEN_TO_BE_REPLACED 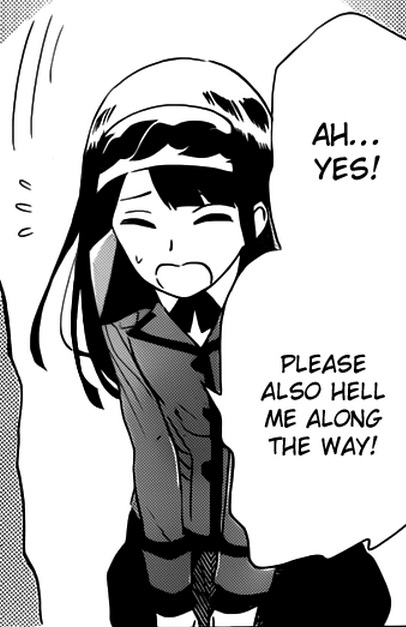 END_OF_DOCUMENT_TOKEN_TO_BE_REPLACED

But One Day: Prologue

But One Day is the name of my novel. My friend asked me ‘so hey what you writing your book on’, and I said ‘earthquakes’. So I guess it’s about earthquakes. I don’t actually have an idea of how I’m going to structure it, so I’ll probably think of something in the next day at school or something.

I’m not going to edit any of this, so if there are grammar and spelling mistakes galore… well, I don’t actually expect anybody to read this in the first place. Besides, editing would be against the virtues of NaNoWriMo.

So, I’ll probably make all of my anime posts like one three-line haiku or something. Maybe I’ll even try writing an anime post without having watched the episode. That’ll certainly be interesting.

P.S. I suck at writing, I have never written good fiction before, ever. I guess my writing skills improved a /bit/ from smashing posts out every day since last last year, but I still haven’t ever written any good fiction. I did write one book in Grade 4, though, but it was about these people who got lost on an island inhabited by giant MapleStory mushrooms with the power of levitation who ultimately used a gun as a slingshot to fire a SOS message at a nearby ship or something. Yes, I played MapleStory in Grade 4. I quit in Grade 5 because Cash Shop came out. I PLAYED MAPLESTORY BEFORE BROA CAME OUT!

P.P.S. Seriously, don’t read this if you hate bad writing. It’s like fanfiction.net fanfiction, except 1) I’m not a fan 2) I don’t write fanfiction 3) This is not fanfiction 4) Well, I guess it’s fiction.

Anyways, here’s the prologue. I swear, I won’t add so much tl;dr next time!

END_OF_DOCUMENT_TOKEN_TO_BE_REPLACED 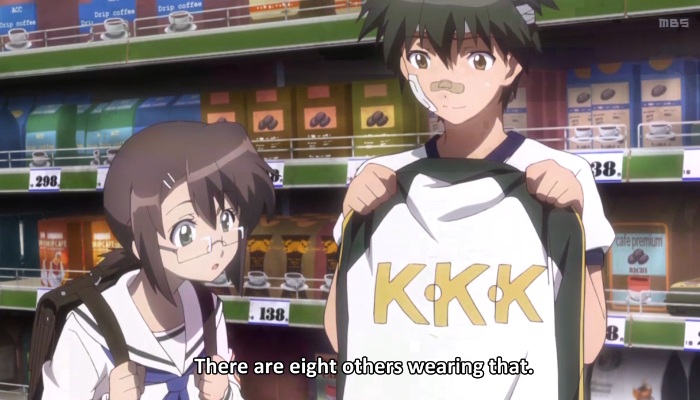 END_OF_DOCUMENT_TOKEN_TO_BE_REPLACED

Man, I got better Internet. instead of downloading at a hundred kilobytes per second, now it’s downloading at over a megabyte per second (Speedtest.net says mine is at almost three megabytes per second). So, I downloaded Episode 2 of KYOUKAISENJOUNOHORIZON in SIX MINUTES. What’s the point of downloading an episode in six minutes when it takes twenty to watch the show?! I’m better than 86% of people in terms of download speed, but I’m worse than 99% of people in terms of anime-watching speed. It took me two hours just to watch this episode (with screenshots, blobs, notes, etc.) and another three hours just to write this post (five in total)! 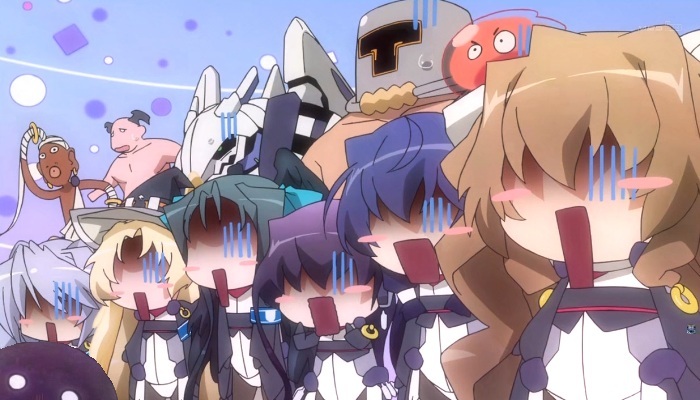 END_OF_DOCUMENT_TOKEN_TO_BE_REPLACED

So, why the heck am I blogging this? IT’S TIME TO DERP ALL THE WAY IN PREPARATION OF NANOWRIMO

This is me after this season is over (by which time I will undoubtedly not remember what the heck I decided to do and why the heck I did it):

END_OF_DOCUMENT_TOKEN_TO_BE_REPLACED

Summer was nice, but there was a lot of anime. It didn’t seem like it at first, but add in the ton of two-cour anime from Spring and I had my plate full /even/ without school. Thus, I’m going to be following far less anime this season (the lack of multi-cour shows from Summer helps) – not only because school might bog me down, but because I want to participate in NaNoWriMo this year and catch up on unfinished anime (first seasons of established shows, I’m looking at you…). Yet, no matter how many anime I watch, I still do nothing at all, so maybe it might just be better to watch another ton of shows.

Next, after recently adding the ‘Potential Rating’ thing last season (which are absolute and not relative by season, so there ‘could’ be a season where everything is at a 1/5), I introduce yet another groundbreaking innovation by the team (there’s a ‘me’ in team, but I see no ‘we’) here at O-New: custom-designed, fully original, only 30% from-anime artistically inclined modern imaginative drawings from a highly educated scholar in writing informative posts!

That is to say, bad mspaint doodles. HUEHUEUEHEUEHEUHUEHUEHEUHUUU

END_OF_DOCUMENT_TOKEN_TO_BE_REPLACED

Happy November~! (NaNoWriMo month, but I don’t have time for that anymore ;~;)

Yeah, I wanted to compose some two pieces a month (to Saw a Tree was composed, like, a long time ago), but because of my computer crashing, well… couldn’t.

So, here are two pieces; both rushed, both experimental, and both very, very, sketchy.

Both scores/mp3s also aren’t complete, and there are slight differences between the score and mp3 because of last-minute adjustments. Don’t worry, I’ll perfect them later.

And yes, I realize that such a F cannot exist on a piano. And all those notes at the end you can’t see? Well, here in Canada, we call that magic.

朝草画花 ~ Gorgeous Sweet Clover
.pdf
.wav (couldn’t export to .mp3 for some reason on this one)

Somewhat like the top one, the alto flute part is copied to the trumpet next, so the trumpet can do nothing but echo the flute, which is drowned out by the trumpet – a battle between time and power.

Alright, I use D major /way/ too much. Would’ve used B, but dunno how flutes and trumpets turn… Also, I admit; I had to check the sheet music for that last Meiji 17; but I didn’t for the SWR title! Why I added those was merely to up the number of bars to 77.